Nene Pimentel: Nothing wrong with allowing Chinese to fish in PH’s EEZ 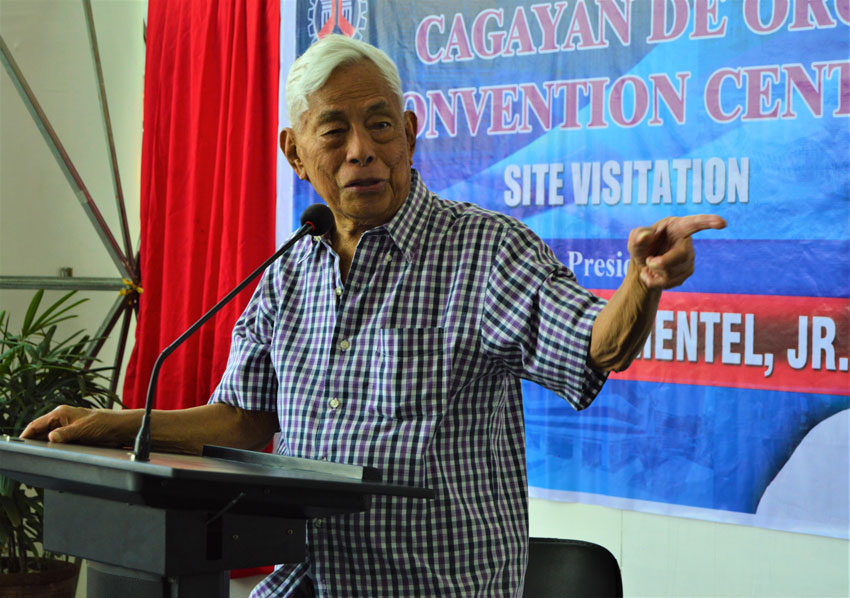 Former Senate president Aquilino “Nene” Pimentel says he finds nothing wrong with Chinese fishing in the country’s exclusive economic zone as long as the Philippines doesn’t give up its sovereignty. (Jigger J. Jerusalem/davaotoday.com)

“What’s important is that our right of sovereignty over this area is not given up,” Pimentel, a Duterte’s partymate, told reporters when he visited the City last Sunday, June 30, to administer the oath of office of local officials and to inspect the convention center project he initiated.

Duterte said he has given permission to Chinese fishing boats to fish within the Philippines’ EEZ to have “a more friendly relationship with China,” Pimentel said.

Duterte has been flip-flopping on his statements on the ramming of a Filipino fishing vessel, Gem-Ver 1, by a Chinese trawler near Recto Bank in an area within the internationally recognized 200-mile EEZ where only Filipinos can fish – last June 9.

At first, the President downplayed the incident calling it “an ordinary maritime traffic incident”. He said he will allow the Chinese to fish on the Philippines’ maritime territory because he sees them as friends.

A few days later, Duterte’s spokesperson Salvador Panel was quoted as saying the President “will not relinquish our sovereign rights over our country’s [EEZ].”

Pimentel said Duterte’s warming up to China is a practical move and a departure from the country’s previous relationship with other superpowers such as the United States.

“The way I look at it, Duterte is just trying to be practical in the sense that for a long time China was considered an enemy. We only have friendly relations with U.S. and other democratic countries but not with China,” he said.

Pimentel said it’s acceptable to expand the friendship to China, Russia, and other “authoritarian” nations, but, he added, “we don’t allow the culture and tradition of these foreign countries which are authoritarian in nature, to penetrate our own democratic regime.”

The former lawmaker said he “totally disagrees” with Duterte for belittling the 1987 Constitution saying in one of his speeches that if he shows it to the Chinese, he would only be told to use it as toilet paper.