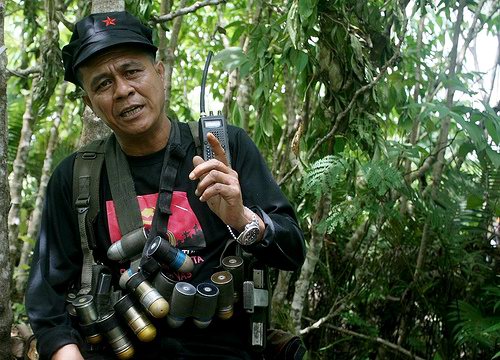 The NPA said their “active counter-intelligence and subsequent operations” were meant to punish AFP units, especially the Civil Military Operations Battalion headed by Maj. Jake Obligado, for continuing to “encroach, settle and conduct psychological warfare and intelligence operations” in the villages of Paquibato District.

He debunked the military’s claim that the captured soldiers were unarmed, saying NPA fighters have confiscated three .45 caliber pistols and a hand grenade.  He added the military employed “anti-ambush” methods as the arrested soldiers were using motorcycles, in civilian clothes and were not carrying high-powered rifles.

Capt. Raul Villegas, 10th ID’s public affairs officer, in a statement Tuesday said the soldiers were on their way to the market to buy goods.

“Again, as in many of its twisted pronouncements in the past, the military has used the worn-out excuse that their troops were attacked or accosted by the NPA when the former were engaged in harmless chores like marketing,” Parago said.

Villegas, in the same statement, said that Canitan escaped by jumping off the motorcycle and threw himself in the ravine.

The NPA said their “active counter-intelligence and subsequent operations” were meant to punish AFP units, especially the Civil Military Operations Battalion headed by Maj. Jake Obligado, for continuing to “encroach, settle and conduct psychological warfare and intelligence operations” in the villages of Paquibato District.

Parago said military units under the 1003rd Brigade have militarized the civilian populace and abused the locals in Paquibato and the hinterland villages of Davao City and Davao del Norte through the AFP’s “peace and development” programs.  He cited the arrest of civilians, red tagging of peasant leaders, harassment of family members of NPA members, the killing of civilian Elias Acero and the wounding of another civilian in an incident April 8, and the killing of civilian Ramirez Esdang in Malabog last December.

He also said the military’s operations in Paquibato District are meant to pave the way for large-scale mining operations.

Parago, the most wanted communist commander in Southern Mindanao, is believed to be operating in Paquibato and adjacent hinterland villages.

The military are now on pursuit and rescue operations following the capture of their men.  However, Parago warned that such move “will only endanger the lives of the POWs.”

“The NPA custodial force will continue to take active defensive stance to protect its troops while ensuring the safety of its captives,” Parago said.

The NPA said the five POWs are undergoing investigation for possible violations on human rights and the International Humanitarian Law; and the possible crimes they have committed against the people.  (davaotoday.com)