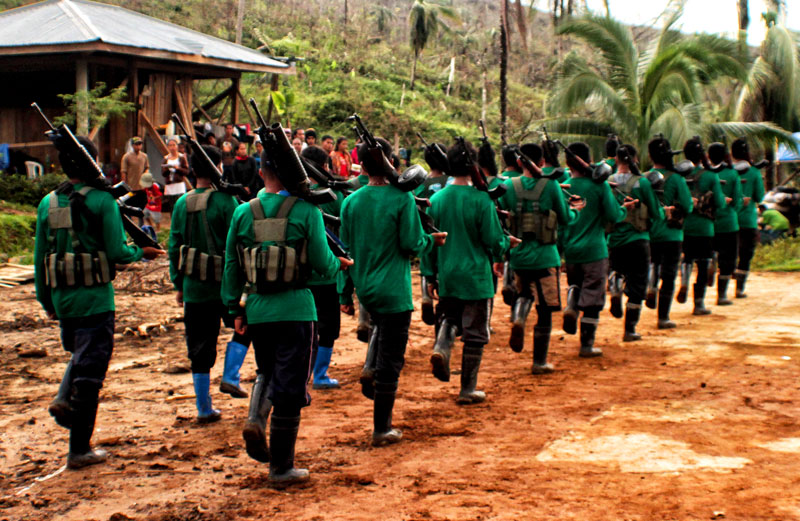 In a statement, Allan Juanito, spokesperson of the NPA in North Central Mindanao, said around 10 platoons of the guerrilla fighters put up the checkpoint in the provinces of Bukidnon, Misamis Oriental, and Agusan del Norte.

The three checkpoints were put up along the national highways of Davao-Buda, Davao-Butuan, and the provincial road in Agusan Norte and Bukidnon.

Two police officers were also taken, including SPO4 Rene Rombo of Kinoguitan PNP Station and SPO1 Gilbert Aguiman. But Aguiman was released due to humanitarian reasons after his child requested the NPA to release his father because he needed medical attention in Cagayan de Oro city.

A certain Orlando Maglipac Magamay, a retired non-commissioned officer (NCO) was also arrested but was immediately released because of his health condition.

At 6:00 in the morning NPA fighters under put up a  checkpoint along the provincial road in Purok 3, Lower Olave, Buenavista, Agusan del Norte where they accosted Private First Class Glenn Austia and PFC Diven Abion Tawide of the 23rd Infantry Battalion.

The NPAs informed the motorists about the futility of the reactionary elections and handed them leaflets.

Juanito said in order to conduct an orderly campaign inside the guerilla zones, the candidates should coordinate with the NPA forces in the area and follow their policies including:

Juanito also said they are reminding candidates to address the pressing issue of hunger and not to use the government’s Pantawid Pamilyang Pilipino Program or 4Ps to buy votes.

At 5:00 am on Sunday, the  NPAs belonging to the South Central Bukidnon Subregional Command conducted a checkpoint along the Sayre Highway, Patulangan, Capitan Bayong, Impasug-ong, Bukidnon.

At 6:00 am, the NPAs from the Eastern Misamis Oriental-Northeastern Bukidnon (EMONEB) Subregional Command put up a checkpoint along the national highway in Mandahilag, Talisayan, Misamis Oriental.

At 6:00 am another checkpoint was put up along Kilometer 13, Santiago, Manolo Fortich in Bukidnon.

Meanwhile, at 5:25 am the Western Agusan Norte-Agusan Sur (Wanas) Subregional Command put up a checkpoint along the national highway in Barangay Rojales, Carmen, Agusan del Norte.

“Their action of setting up a road blocks in Barangay Rojales, Carmen, Agusan Del Norte, Impasug-ong, Bukidnon and Talisayan, Misamis Oriental are forms of intimidation and coercion victimizing peace loving people. It is a contradiction of what the CPP-NPA are claiming that they are fighting for the rights of the people,” said Major Ezra Balagtey, acting spokesperson of the EMC.

Balagtey said they will exert effort to rescue the PNP and Army personnel “without compromising the rule of law, respect of human rights and adherence to International Humanitarian Law.”

Meanwhile, Juanito said they will assure the families of their POWs that the captives will be treated well in accordance to international protocols of war and the Comprehensive Agreement on Respect for Human Rights and International Humanitarian Law (CARHRIHL).(davaotoday.com)