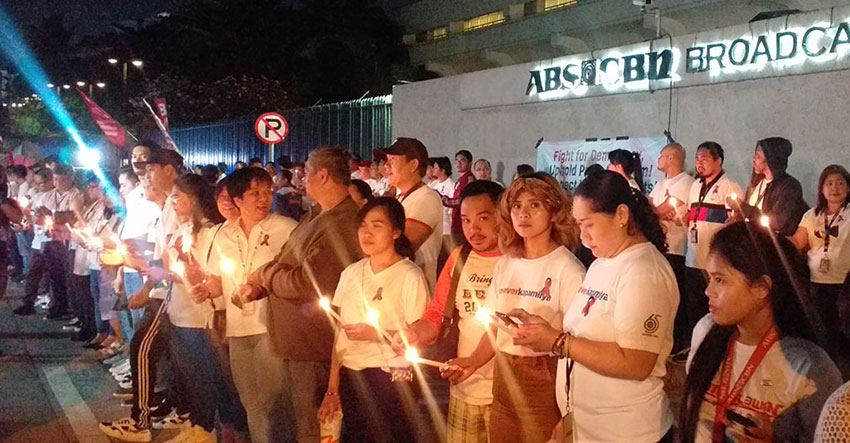 Photo courtesy of National Union of Journalists of the Philippines (NUJP)

By Raymund B. Villanueva

MANILA, Philippines — National Union of Journalists of the Philippines (NUJP) chapters all over the Philippines will hold candle-lighting activities later today, Friday, February 28, to press for media freedom and the franchise renewal of embattled media network ABS-CBN.

To coincide with a mini-concert in front of ABS-CBN’s headquarters in Quezon City are candle-lighting activities in the network’s stations in General Santos City, Davao City, Cagayan de Oro City, Zamboanga City and Tandag City in Mindanao.

The island-wide coordinated activity marks the start of similar actions in support and solidarity with ABS-CBN reporters and media workers, the NUJP said.

A similar activity will be held in the network’s Northern Luzon station in Baguio City, as well as in Bacolod and Iloilo cities in the Visayas.

NUJP Bacolod and Iloilo chapters have started their protest actions several weeks ago and both have complained of surveillance by suspected military intelligence personnel during and after their activities.

In Quezon City, NUJP and its allied organizations, as well as ABS-CBN workers and supporters, will hold a mini-concert as part of its seventh consecutive Friday protests.

The NUJP started their protest actions against threats to block the renewal of ABS-CBN’s franchise last January 17 after reports that Solicitor General Jose Calida was set to file a quo warranto petition against the network.

Calida eventually filed the petition this month as well as a gag order petition in a bid to stop network representatives from publicly commenting on the issue.

The NUJP has since conducted and led 11 activities that compelled both Malacañan Palace and Congress to address concerns of harassments.

The group said its call for ABS-CBN franchise renewal is in defense of press freedom and the jobs of the network’s 11 thousand workers.

In a Senate hearing last February 24, ABS-CBN chief executive officer Carlo Katigbak apologized for “hurting” President Rodrigo Duterte’s feelings but explained that the network failed to broadcast PhP7 million worth of campaign advertisements in 2016 only due to election rules.