Number of gov’t troopers killed in Marawi rises to 84 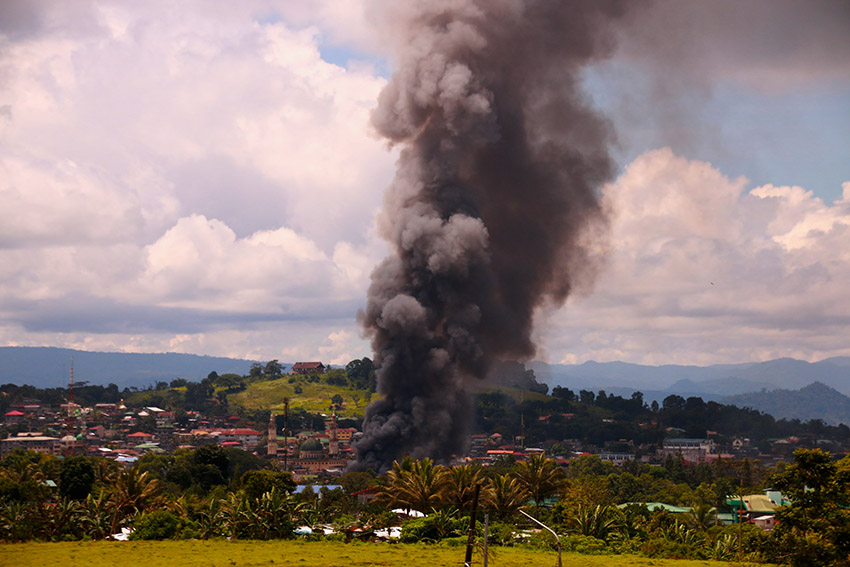 ON FIRE. Black smoke billowed from the area of Sarimanok in Marawi City on Saturday morning, May 27 as attack helicopters of the Armed Forces of the Philippines pounded the area where members of Maute group are believed to be holding their position. (Alexander Lopez/davaotoday.com)

DAVAO CITY, Philippines – As of 6 PM on Sunday, July 2, a total of 84 troopers were already killed as the air and ground assaults continue to topple down the remaining forces of the ISIS-linked Maute group still holed up in Marawi.

Thirty-nine civilians were also reportedly killed by the Maute based on the reports of the cadavers recovered and examined by authorities, Presidential Spokesperson Ernesto Abella told reporters during the Mindanao House press conference in Malacañang on Monday, July 3.

Abella said 336 Maute members were already killed during the battle and 402 of their high-powered firearms were recovered by government troopers.

Rescue of trapped civilians in war-torn areas inside Marawi continue, a total of 1,717 were already rescued since Sunday, he added.

“We’d like to make a note. Again, we’d like to repeat, to reiterate that it is government’s policy not to negotiate with terrorists,” Abella pointed out.

He also urged civilians to “practice the concept of shared responsibility in security by being vigilant, alert, and conscious of their immediate environs wherever they are and to report to authorities suspicious persons or items left unattended immediately.”

Working together, he added, will ensure the security of communities from threats of terrorism.

Abella also cited some significant developments as the efforts to win back Marawi from terrorists continue.

Military offensives, he said, are now focused on the remaining pockets of resistance of Maute members while clearing operations are also being conducted in other areas in the city.

Interagency meetings and consultations for the preparation of the rehabilitation, reconstruction, and rebuilding of Marawi are also being facilitated by concerned agencies and the local government of Lanao del Sur.

Abella also reported that the office of Cabinet Secretary Leoncio Evasco has already ordered housing agencies under the Housing and Urban Development Coordinating Council to reallocate half of their current Gender and Development budget and the remaining unutilized GAD budget from previous years to address the needs of women affected by the continuing conflict in Marawi.

The re-allocation of these budgets, he added, will be used to provide hygiene kits and psycho-social support services to the affected women in Marawi.

Defense Secretary Delfin Lorenzana also briefed the media on the newly-issued Administrative Order No. 3 that creates an interagency task force that will oversee the recovery, reconstruction, and rehabilitation of Marawi and the other affected localities in Lanao del Sur.

Lorenzana said he is designated as chairperson of the newly-created “Task Force Bangon Marawi.”

“We are now preparing the mechanism to go into the rehabilitation and recovery as soon as the fighting stops in Marawi. And since I am also the chairman of the NDRRMC, the National Disaster Risk Reduction Management Council, I’m going to use the NDRRMC as the vehicle to implement the rehabilitation of Marawi because we consider the events in Marawi as a man-made disaster,” he said.

He added that after the fighting will stop and the areas inside Marawi are already cleared of explosives and other improvised explosive devices, the task force will immediately start to allow residents to go back to the city.

An engineering brigade from the Philippine Army is now on standby and will be ordered to proceed to Marawi once the fighting stops, Lorenzana said.

The brigade, he added, will focus on the rehabilitation of the electricity, water and the damaged roads, bridges and other buildings of the government.

He also told reporters that President Duterte has decided to help civilians rebuild their homes and the restoration of stores and other businesses, including banks. (davaotoday.com)