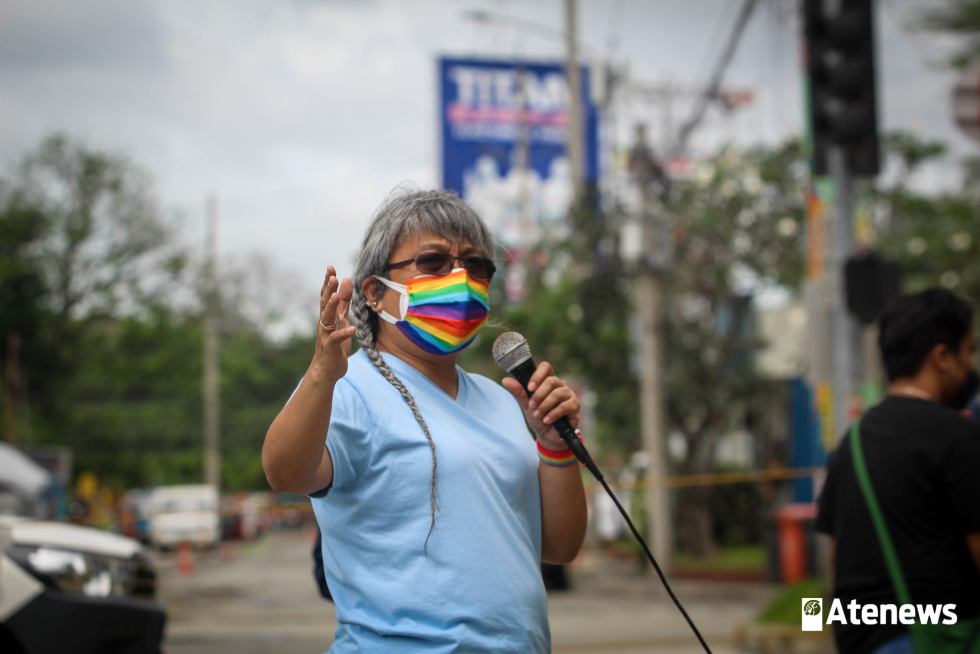 DAVAO CITY, Philippines — From a student leader and activist to a development worker—now a Davao City 1st congressional seat aspirant.

She is one of the three candidates going up against Davao City’s Former Vice Mayor and incumbent 1st District Representative, Paolo “Pulong” Duterte.

Although only in this upcoming elections did she decide to run for office, she has already been exposed to numerous governmental practices as a consultant.

According to her blog, she has over 30 years of experience in “accompanying local governments and communities through capacity building, technical assistance, and direct support” locally, nationally, and internationally.

With this expertise at hand, she detailed that she has “a good grasp, ‘di lang working grasp but a very intimate grasp of government and government processes.”

When asked about her reason for running, she simply stated that the people, especially of District 1, deserve better.

“So kung representate ka, ibig-sabihin nun, dapat kilala mo yung kinakatawan mo, you know their kalagayan, kung sino sila, what their challenges and their aspirations are, and then you make sure, you get their input on the burning questions of the day,” she added.

Her primary campaign revolves around the upgraded version of the infamous Philippine Politics 3Gs, which is originally ‘guns, goons, and gold.’

Despite Maglana’s decorated background as a former AdDU Student Central Board president for two terms and student activist, she admitted that she was not initially inclined to activism and progressive activities ever since.

“When senator Ninoy Aquino was assassinated, the public perception was that the Marcoses was behind the assassination. In my class, I think I was the only one who did not believe that. I wanted to give Marcos the benefit of the doubt,” she stated, denoting her former conservative environment.

In college, she recalled attending AdDU’s Freshman Christian Formation Program. She was introduced to diverse communities, such as the Badjao, noting that “dun nagsimula ‘yung being able to see beyond my immediate circumstance and those of my family, my personal experiences, and being a student.”

However, what essentially sparked her devotion to activism was when she encountered a group of students questioning the University’s tuition hike, deeming it unreasonable.

She revealed that it was somewhat successful as they encouraged dialogues and received support from the teaching and non-teaching staff.

From then on, she became more acquainted with protest actions as she had seen the urban poor, Lumad, and workers among a few who actively contested for their ‘survival’ around the city. She called these experiences “paglalim at paglapad.”

“I also listened and talked to them, and then I understood that they were contesting because their rights and their bare survival were being affected by the policies and machinations of the Marcos administration, so literally, for some of them, it was a fight of survival,” she said.

She was also affiliated with the National Union of the Students in the Philippines and Buklod Atenista, where she mainly championed the Students’ Rights and Welfare.

“Sinasabi ko activism save my life. [It] saved me from my directionless life,” she described.

Projects for the 1st district

If triumphant in this congressional seat bid, Maglana intends to prioritize addressing women’s discrimination, Magna Carta on the Informal Economy, and solid waste management as an industry.

For the Magna Carta on Informal Economy, Maglana also mentioned aiding micro and unregistered businesses in transitioning to a formal setup.

She further proposed the Solid Waste Management System as an industry, which she named “the next big thing in Davao” and is related to the concern of the informal economy.

“Parang, on the one hand, you’re addressing the very real problem of solid waste management, which is a score to all urban places in the country. That’s on the one hand. But on the other hand, they’re also doing it in a way na hindi big businesses ang nagdodominate at hindi rin ‘yung masasyadong maliit-liit na mga na parang, alam niyo ‘yun, they don’t take it [as] a dent in the problem,” she detailed.

Among other issues, she also expressed her purpose to tackle flooding, demolition, and transitional justice.

As Maglana recognizes the laborious feat of running against a member of the most famous dynasty in Davao and confronting personality politics, she understands that her team must be more proactive in communicating their cause.

The 1st congressional seat hopeful conveyed after filing her certificate of candidacy that she first sought to break the perception that there are no other candidates than Congressman Pulong by spreading the news.

She then elucidated the responsibilities of the position she is running for to the people, revealing that “it’s not that easy because people don’t have the patience for that explanation.”

Changing the narratives of the usual campaign machinery, Maglana came up with more ‘creative ways’ to amass the people’s votes, such as sikadcades/sikadravan or tricycle procession since motorcades and autocades are prohibited. She also emphasized the need for ‘sipag’ or perseverance, which she thinks the dynasts often overlooked.

With the May elections fast approaching, Maglana tells the voters that it is high time for a woman to lead and provide inclusive policies in the first district after many years.