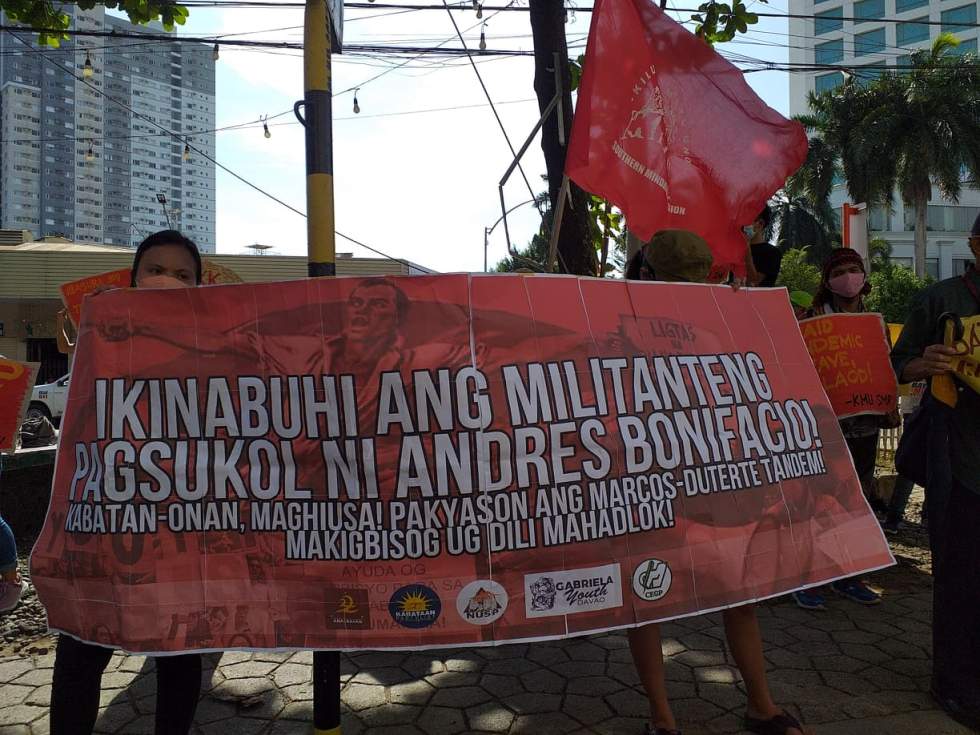 CONTINUING STRUGGLE. On Bonifacio Day 2021, youth groups enjoin the young to follow in the militant footsteps of Andres Bonifacio Day by resisting the tandem of Ferdinand Marcos Jr. and Mayor Dara Duterte-Carpio in the upcoming 2022 presidential race.

DAVAO CITY – Labor groups, progressives and youth activists braved police restrictions in the city to staged a rally on November 30 commemorating the 158th birthday of Andres Bonifacio, known as the Father of the 1896 Philippine Revolution.

In their rally held at Freedom Park in Roxas Avenue, the groups said history needs to be revisited as the aspirations of the revolution are betrayed by the current political situation.

Kilusang Mayo Uno said the Duterte administration is similar to the history of President Emilio Aguinaldo, whose revolutionary group Magdalo wrestled control of the revolution against Bonifacio.

Historians believe Aguinaldo was behind the murders of Bonifacio and later General Antonio Luna, who were both critical of his leadership.

“Duterte, like Aguinaldo, silences his critics. Since Duterte’s reign, a total of 421 activists were already killed, more than half a million experienced threats, harassment, intimidation, and thousands were illegally detained. The war on drugs has claimed more than 20,000 Filipinos, yet drugs continue to proliferate in the country at present including in Duterte’s hometown,” said PJ Dizon, KMU-SMR spokesperson.

The president is now facing a probe by the International Criminal Court for these human rights violations committed under its war on drugs operations.

The government’s COVID-19 response has become a source of corruption.

“The multi-billion dollar loans for COVID response has also become an oasis for Duterte and his allies, siphoning people’s money as exposed in the bureaucratic corruption in DIH, Philhealth, DSWD and other agencies,” Dizon said.

“It is estimated that these loans will grow 27.2% in interest. They said this (loan) is their pandemic response, but has everyone received ayuda or cash aid?” Baslot asked.

Bayan and KMU both lambast the government’s National Task Force to End Local Communist Armed Conflict (NTF-ELCAC) not only for its red-tagging of activists and government critics, but also for siphoning P16 billion in this year’s budget which for them could have been spent for COVID response.

During the rally, the groups said the NTF-ELCAC funds were dangled by Duterte like a “bribe” to woo generals and local chief executives in the guise of barangay development funds.

The corruption is condemnable, they said, and is a betrayal of the Filipino people where around 4.25 million remain jobless and 45% of them consider themselves poor.

KMU SMR said Duterte has only controlled the government to favor his cronies and Chinese interests.

The youth group Anakbayan called for Filipino voters to stop the historical revisionism of presidential contender Ferdinand ‘Bongbong’ Marcos, who is leading in surveys.

The son of the late strongman has denied the wrongdoings and corruption of his father despite court cases awarding their ill-gotten wealth to Martial Law survivors.