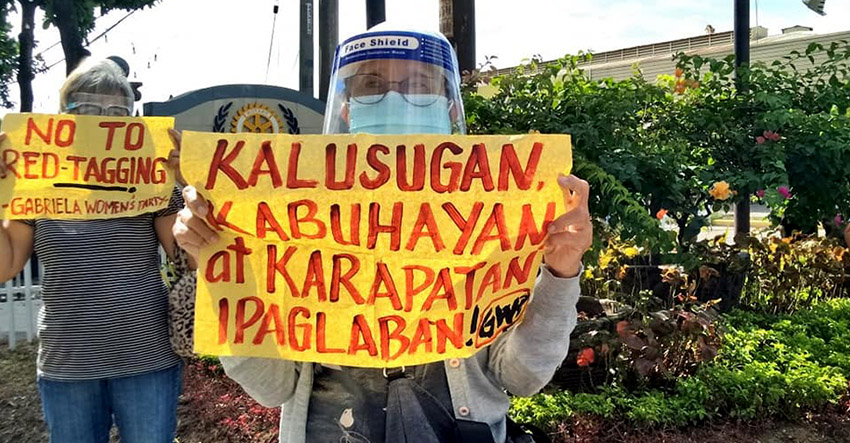 Members of progressive groups stage protest actions on Monday morning, November 30, 2020, despite restrictions by the local government for mass gatherings in time for Bonifacio Day. (Photo courtesy of Kadamay-SMR)

DAVAO CITY, Philippines – Progressive groups pushed through with their protest actions despite restrictions by the local government for mass gatherings in time for the commemoration of the 157th birthday of the working class revolutionary hero Andres Bonifacio.

The protest actions took place in two areas early at 9 am, with the Kilusang Mayo Uno leading their rally along Bankerohan Public Market and other groups staging their rally at Freedom Park along Roxas Avenue.

Despite a local executive order that prohibits mass gatherings, the police allowed the groups to stage their rallies. The protesters at Freedom Park defied the police’s orders to have them stage a rally while sitting in pre-arranged chairs, as they proceeded with their rally with social distancing.

PJ Dizon, KMU Southern Mindanao spokesperson, said the protest actions want to send a message to the Duterte administration and local government that its “repressive and anti-people” policies failed to address the people’s concerns and plunged the country into worsening poverty amid the COVID-19 pandemic.

“Because of the pandemic, Filipino lives have become more unbearable with plummeting incomes, lost jobs, lack of government, and heavily repressive measures,” he said.

Dizon said government’s social amelioration under Bayanihan Heal as One 1 and 2 was mostly “a one-time aid” that was very limited and did not cater to around 200,000 workers who have lost their jobs in Davao region in the past eight months due to closure of around 10,000 business establishments due to the community quarantine.

He added that said the city government’s measures such as the re-imposition of the curfew and arrests of quarantine violators resulted to plummeting incomes, loss of jobs, hunger, and widespread poverty.

Dizon workers have been sacrificed by companies due to the effects of the pandemic.

“Currently, the teaching and non-teaching personnel of Holy Cross of Davao College, Inc. are the latest addition to the number of workers who will be lost their jobs during this pandemic,” Dizon said.

KMU said in their statement that the school, ran by the Archdiocese of Davao, is reportedly terminating all its college faculty and personnel by December 31, 2020 and its basic education personnel by May 2021.

Rice farmers in parts of Mindanao are also hit hard as the buying price of their palay is nailed down at P12 per kilo and that is without deductions from costs, said Dizon.

Dizon also lambasted the recent demolition of houses of 170 urban poor families in Quiñones Compound in Upper Mahayahay, Diversion Road Matina Crossing despite government’s order to postpone any eviction or demolition in the course of the pandemic.

KMU said the workers and other sectors have contempt for the administration that has swept their issues and slapped them with red-tagging and human rights violations.

“For four years under Duterte’s helm, the Filipino lives had become more difficult. His programs are utterly subservient to the interests of the foreign and local capitalists, for the big landlords and his cronies.”

KMU said Bonifacio Day must be remembered by his “nationalism and aspirations” in these trying times. (davaotoday.com)