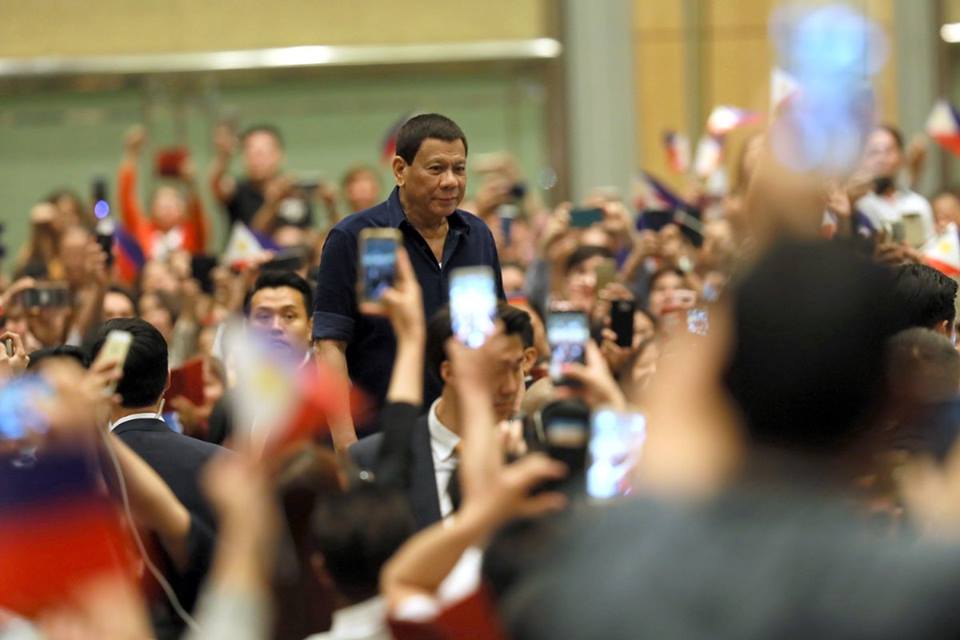 President Rodrigo Duterte meets with the Filipino community based in South Korea on June 3, 2018.(Malacañang photo)

MANILA, Philippines — President Rodrigo Duterte drew flak on Monday after his controversial onstage kiss with an overseas Filipina worker while on an official visit to South Korea.

On Sunday, Duterte gave a two-hour speech before the Filipino community in Seoul, South Korea. He gave out books about corruption in the Catholic Church to two of the audiences, one of which he ended up kissing on the lips upon going up on stage with him.

“‘Wag lalaki, may bayad ‘to halik. Handa ka bang makipaghalikan?​ (Not a male, this one has a price. Are you ready to kiss?)​” Duterte said while calling to a woman in the audience.

Loud cheers can be heard from the audience at this point.

Prior to handing the book, “Altars of Secrets,” to the woman, Duterte mocked the Catholic Church.

“Di ako naniniwala ng Katoliko, ‘yang Adam at Eve na ‘yan tingnan mo pagka-hindi…kung ‘yan ang Diyos ng Katoliko, torpe ‘yan. Maghanap ka ng Diyos na tama​. ​Tingnan mo ha sa catechism​​ (I do not believe in Catholicism​. ​That ​Adam and Eve, look at them if they don’t…if they are the gods of Catholics, it’s a moron. Look for an upright God​. See its catechism:) “And God created the world. It was a paradise because there was nothing…” he said.

The President was there for a three-day official visit upon the invitation of South Korean President Moon Jae-in, who he would meet on Monday.

More than being a “shock,” the militant opposition lawmaker lamented the message Duterte’s act conveys to women.

“It was really a shock but more than that is the message that conveys to women grabe it is as if he can do anything to women being the President he should be mindful of his position,” Brosas said in a statement.

While the woman defended the act, Brosas said it remains problematic because Duterte is in power.

“It is really unfortunate na kahit mismo yung babae ay ipinagtanggol pa ang nangyari. Kahit pa hindi niya maramdaman na mali yon may problema doon una dahil pangulo, nasa posisyon in power makakatanggi ba siya?​ (…that even that woman defended what happened. Even if she did not feel it was wrong, there was some problem. First, because he is the President, he is in position, could she refuse?)​” she asked.

Bea Kim, the woman kissed by Duterte, has denied any malice involved when Duterte kissed her.

“Walang malisya ‘yun. Ginawa lang namin yung kiss parang twist lang ‘yun, pampakilig sa mga audience. Walang ibig sabihin ‘yun, promise​ (There’s no malice there. We kissed as a twist, to tickle the audience. There was no meaning to it, promise)​,” she said in an exclusive video posted by the State-owned news site, Philippine News Agency.

Brosas meanwhile, called on the government to refrain from these “gimmickry” and instead address the issues faced by many Filipinas.

“But over all I think wag ilihis ang problema ng mga kababaihan sa mga ganitong gimmick sagutin ang krisis na kinakaharap ng mga kababaihan at ang dapat na ipromote at gawin ng pamahalaan ay respect an​g​ equality for our women at yon ang harapang niyurakan ng Pangulo​ (…don’t deviate from the problem of women in these gimmickry, address the crisis faced by women and what should be promoted and being done is to respect ​the equality of our women and that was what the President has trampled upon),” Brosas said. (davaotoday.com)