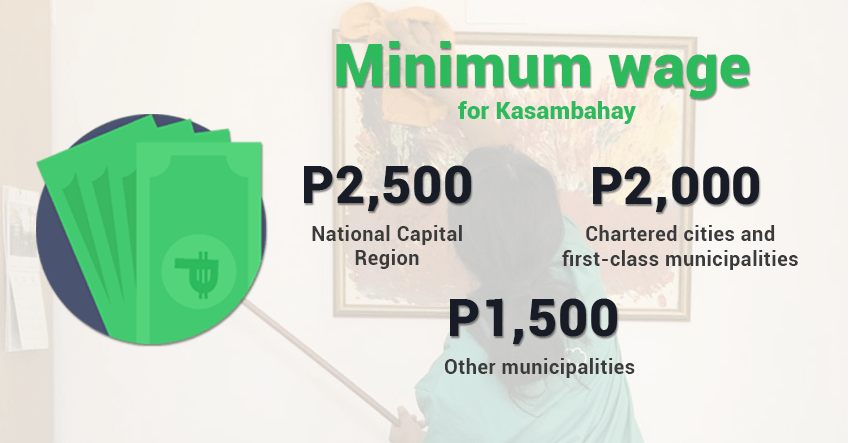 The current minimum wage mandated under the law provides for a 2,000-peso monthly wage for those employed in the cities and first-class municipalities and the provision of mandatory benefits covering the Social Security System (SSS), PhilHealth, and Pag-IBIG.

In addition, the said amount is only enough for single individuals, according to Mercedita Corpus Galon, a domestic workers for three years.

Galon is now president of the Magsaysay Association of Persons with Disability in Magsaysay town in Davao del Sur province.

Galon said domestic workers point out the lack of scope in working hours as among the reason why the P2,000 salary is not enough.

She said domestic workers work on a 24/7 basis and thus small salary offers only gives them more reason to work abroad instead.

“Outside the country they can earn at least P18,000. The risk is there and they are away from their families, but it’s an opportunity to earn better,” she said.

The lack of decent job is also a reason why there are a lot of beneficiaries of the Pantawid Pamilyang Pilipino Program, the government’s conditional cash grant to indigent residents.

Galon said some domestic workers are paid P200 daily, while some are paid P3,000 monthly. The job includes doing laundry and cleaning the house.

The Regional Tripartite Wage and Productivity Board in Region 11 conducted the first public hearing on the wage hike of domestic workers or “kasambahay” (house-help) on Monday, October 16.

Raymundo Agravante, regional director of the Department of Labor and Employment 11, said they are mulling to increase the minimum wage for domestic workers.

He said the RTWPB-11 will deliberate this October 23 and October 30 the points presented by the employers and the domestic workers to come up with a new wage order. (davaotoday.com)