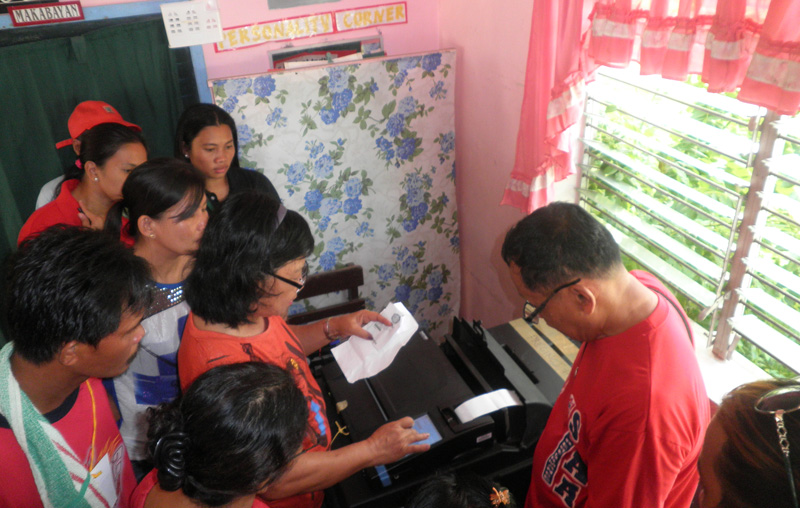 Chairman of the Board of Election Inspectors (BEI) Emelia Jordan said that she could not identify the cause of the problem, “(D)espite the fact that correct procedures were followed.”

STO. TOMAS, Davao del Norte, Philippines — Voters and poll watchers in this town are worried that the casting of their votes will be extended until nightfall after three PCOS (precinct count optical scan) machines in various poll precincts encountered technical problems.

Rosalita Jabonera, a poll watcher of a mayoral candidate, reported to davaotoday.com that the PCOS machine in Cluster 3 precinct in New Katipunan Elementary School would shut down every time it is turned on.  After several attempts, the machine still didn’t work.

Chairman of the Board of Election Inspectors (BEI) Emelia Jordan said that she could not identify the cause of the problem, “(D)espite the fact that correct procedures were followed.”

Jordan called the Commission on Elections (Comelec)-Sto. Tomas and asked for the PCOS technician to check the machine.  However, Jordan was instructed by the Comelec to unseal and remove the back-up memory card.  The said instruction earned disapproval from the poll watchers and voters around the precinct.

In Balagunan Central Elementary School, PCOS machines of Clustered precincts 3 and 4 encountered similar problems when a voter fed the ballot in the machines and it read “Need to verify.”

Voter Maria Guzman said that it took them almost two hours to wait as she lamented that their votes will be “put to waste” if the machines remain unfixed.

BEIs of Clustered precincts 3 and 4 are still waiting for the PCOS technicians to check the machines, as of this writing.

Esther Sison, Election Officer III of Comelec-Sto. Tomas, in an interview, said that “all security measures including contingency plans are in place in case there will be security concerns.”

On Sunday, the Municipal Treasurer’s Office released the election paraphernalia to the members of the BEIs who will facilitate the conduct of the election.  They received the plastic seals, indelible ink, ballot secrecy folders, envelopes, election forms (recording of minutes and protest), precinct numbers and the like.

However, she noted, that the CCVL (computerized certified voters’ list) was not yet posted outside the poll precincts due to security reasons citing that last 2010 elections CCVLs were destroyed by small bandits of “rugby boys” who managed to get inside the school premise despite the presence of security personnel on-duty.

Meanwhile, Tagum City Election Officer IV John Paul Cubero said “all schools in Tagum City have done their duty to prepare their precincts with the coordinated efforts of the Election Supervisors assigned in the field.”

In this city, Nej Lupian, a public school teacher and an appointed poll clerk from Magugpo Central Pilot School said that she is confident that the election will be smooth.

“With all our painstaking preparation, so far, we have “green light” (for the polls) and we have re-oriented ourselves with the procedures for the smooth conduct of the said election,” Lupian said.

Earlier, Davao Light Company and Davao del Norte Electric Cooperative (Daneco) have assured the public that there will be no power interruptions on Monday as part of the agreement between the Comelec Provincial office and the two electric service providers in Davao del Norte Province.

Over-sized posters, campaign materials placed in public vehicles and vote-buying were some of the reported violations by the voters that marred the conduct of the midterm elections here.

He observed that over-sized tarpaulin which was obviously beyond the legal limit set by the Comelec was mounted in some “sham” Voter’s Assistance desk.

“This is a clear violation and considered as an election offense.  I hope that this will be removed following the Comelec’s ruling,” Irasga said.

Voter Erlito Panya reported to davaotoday.com that some posters of local bets were posted in some pedicabs and these pedicabs were allegedly used to transport voters-supporters to various poll precincts.

“The act itself is clearly a violation of the Comelec’s ruling on campaigns material place in public vehicles,” Panya said.

Davao Today tried to call Comelec’s Sison to comment on the reported violations but her line can’t be reached.  (Mart D. Sambalud/davaotoday.com)