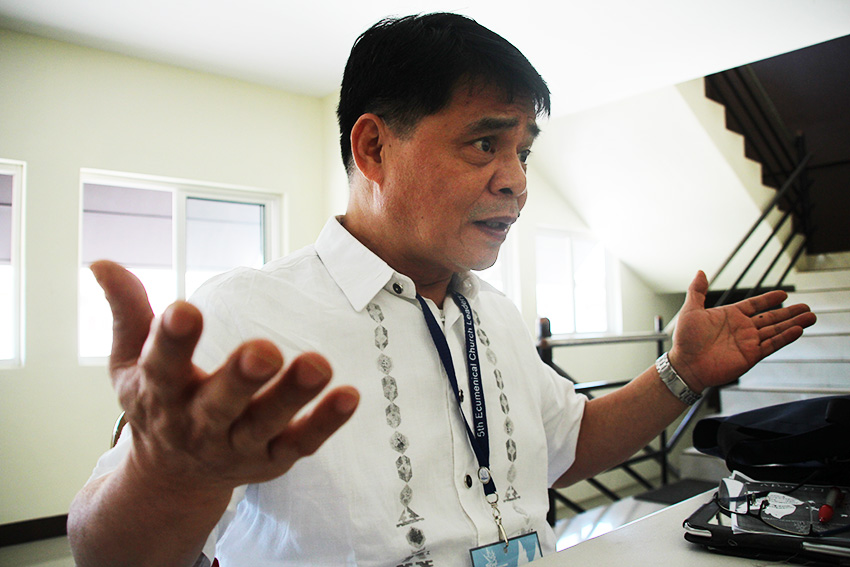 CHURCH LEADER National Council of Churches in the Philippines general secretary Father Rex Reyes says that peace is not just the absence of war, but also a “situation of justice”. (Paulo C. Rizal/davaotoday.com)

DAVAO CITY, Philippines — A church leader said that an agreement on social and economic reforms will address the root cause of the armed conflict.

Fr. Rex B. Reyes, co-chairperson of the Philippine Ecumenical Peace Platform and secretary general of the NAtional Council of Churches in the Philippines said that if both negotiating panels of  the National Democratic Front and the government of the Philippines reach an agreement on the agenda for socioeconomic reforms, “the roots of the armed struggle will be addressed.”

Reyes said they hope both panels will succeed in reaching an agreement as they meet for the second round of talks in Oslo, Norway on October 6 to October 10.

The preliminary peace talks held on August 22 – 28 in Oslo were regarded by both sides as successful with the affirmation of previously signed agreements.

Reyes also stressed that peace is not just a “state of mind.” He said that for as long as social inequality exists, peace cannot be achieved.

“How can you have peace when there are people who go hungry while others have too much too eat, when some people live here, while others live beside the gutter. There is no peace there,”  Reyes told Davao Today at the 5th Ecumenical Church Leaders Summit for Peace held here Thursday, September 22.

He said the real cause of insurgency is the economic inequalities.

“The economic problem is the biggest reason why we have this war, why a rebellion is in place. The gap between the rich and the poor is very wide,” Reyes added.

With the resumption of the peace talks with the communists, as well as the Islamic armed groups being one of President Rodrigo Duterte’s main campaign platforms, church leaders like Reyes are positive that a “substantial” agreement for peace is underway.

Reyes lauded the initiative of Duterte which he said is in contrast with the former administration’s “lack of interest” in the peace talks with the communists.

“The environment for the conversation is so good. First, our president has the political will, he really wants to talk peace. He did everything that he could do with his powers as president to ensure that the peace talks begin,”  Reyes said.

The PEPP, the largest formation of ecumenical church leaders in the country, held its 5th Ecumenical Church Leaders Summit on Peace in Homitori Inn here on September 21 to 22. The event was also attended by government peace panel member Angela Librado and NDFP chief negotiator Luis Jalandoni.

Topics such as the peace talks and the government’s plans to shift to a federal state were discussed by church leaders coming from different congregations and sects.

The Communist Party of the Philippines is waging what is described as the longest running communist insurgency in Asia for more than 40 years.  The peace talks, which have been going on and off since 1986 during the time of the President Corazon Aquino, was last stalled during the term of his son, former president Benigno Aquino III.(davaotoday.com)