People to gain from Duterte’s ties to China, but… 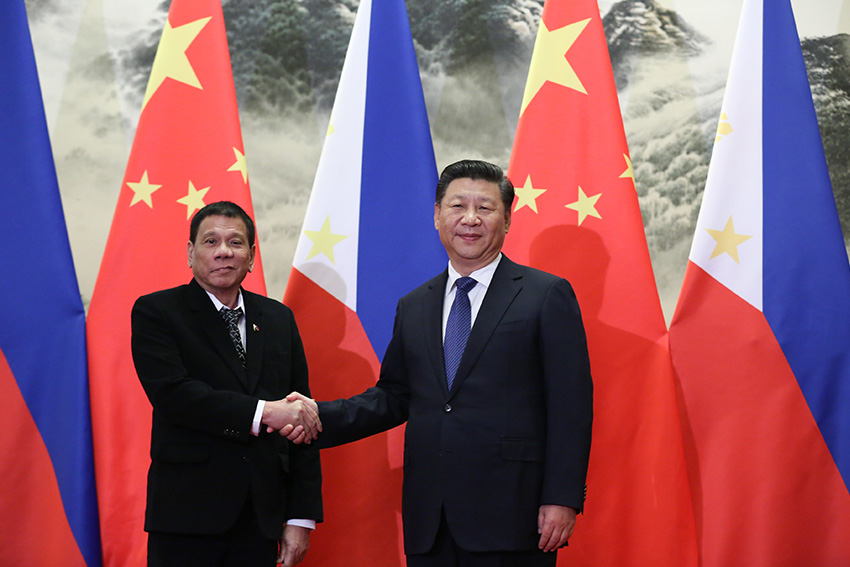 Philippine President Rodrigo Duterte and People’s Republic of China President Xi Jinping meet and shake hands prior to their bilateral meetings at the Great Hall of the People in Beijing on Thursday, October 20. (King Rodriguez/PPD)

DAVAO CITY, Philippines — The Communist Party of the Philippines said it is critical of President Rodrigo Duterte‘s friendship with China, while at the same time saying it can also be beneficial in terms of the country’s breaking free from the clutches of US domination.

“The revolutionary movement is aware that China has its imperialist self-interest in forging friendships with the Philippines. On the other hand, they also see the opportunities for positive changes in the economy and people’s livelihood which were long closed because of US domination and reliance,” the CPP said in a statement on Friday.

The CPP described China as “one of the biggest capitalist countries and a burgeoning imperialist power.”

“It was once a modern socialist country (1949-1976) before the new bourgeoisie which emerged from the bureaucracy wrested state power and destroyed the Communist Party of China and the socialist system,” it said.

Duterte visited China from October 18 to 21 where he reaffirmed the centuries-old ties with the Chinese in a bilateral meeting with President Xi Jinping.

In the joint statement between the two countries, both sides “agree that since the establishment of diplomatic relations, Philippines-China relations have enjoyed smooth development and remarkable progress in many areas of cooperation which have benefited both countries and peoples.”

During his speech in front of Chinese businessmen and government officials at the Philippines-China Trade and Investment Forum Thursday, Duterte announced the Philippines “separation” from US.

“I announce my separation from the United States, both in military, but economics also,” he said.

The CPP sees President’s friendship with China can also be beneficial to the Filipino people.

“Duterte’s friendship with China can help the Filipino people in  their struggle to break free from US control and domination and end reliance on US imperialism. But this will happen only if the Filipino people’s national democratic struggle will continue to advance and if the Duterte regime will forge with them a patriotic alliance,” it said.

As billions of dollars worth of investments and loans from China are bound to enter the country, “China must be called upon to allot a substantial amount of investments to support national industrialization and genuine land reform to get the local economy to stand on its own feet.”

“The protection of the welfare of millions of people must be ensured in every infrastructure project,” it said.

“Duterte must train principal attention to distributing land to peasant tillers as a means of correcting a historic injustice, and to pave the way for modernization of local agriculture geared towards the production of food and other needs for local processing,” the CPP added.

The CPP said the Duterte government should ensure that policies will have “corresponding policy of protecting national interest” to ensure the Filipino people will not be disadvantaged with its relations to China.

“It must be insisted that a portion of investments be alloted to basic industries and that there should be technology transfer. There must also be clear-cut policy for protecting the environment and the national patrimony,” it added.

“Duterte must also seek to weaken US imperialist influence and control of the AFP which has been dependent on US military aid and oppose the policy of suppression against the anti-imperialist, progressive and revolutionary forces,” it said.

‘China in a crisis’

The CPP also said China is facing a capitalist crisis in finance and over production.

“Its inventory of surplus goods (steel, cellphones and other electronic products and parts) is growing as well as uninvestible surplus capital. It seeks areas to dump its surplus goods and bigger sources of cheap labor-power and raw materials to run its so-called Factory Asia-the network of tightly linked factories in different countries that engage in semi-processing,” it said.

The CPP also warned that China has “imperialist ambitions”. It said the Chinese government’s geopolitical interests are increasing and its challenge to US growing.(davaotoday.com)