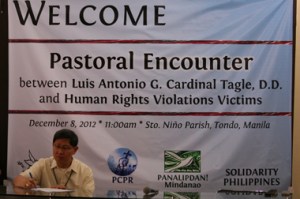 MEET THE CARDINAL. Cardinal Luis Antonio Tagle spares time to meet the delegates of Manilakbayan (A Journey to Manila) and listen to their testimonies, December 8 at the Santo Niño de Tondo Church in Manila. (davaotoday.com photo by Alex D. Lopez)

Tagle said he would try to communicate with the bishops of the countries of origin of these foreign mining firms.  “I believe church leaders in these countries would be interested to know the implications of mining activities of these firms,” he said.

MANILA, Philippines — The country’s highest official of the Catholic church, Cardinal Luis Antonio Cardinal Tagle, expressed that he will help human rights victims of Mindanao and will bring the matter to President Aquino.

In a dialogue with Manilakbayan  (Journey to Manila) delegates on Saturday, Tagle said,  “He (the President) asked me once to just tell him what I can say to improve his administration,” he said.

Fifteen delegates, mostly leaders from different indigenous tribes in Mindanao, presented the worsening human rights situation in Mindanao to Tagle, in the hope to bring the situation to the corridors of Malacañang and eventually find resolutions.

Tagle said he would try to communicate with the bishops of the countries of origin of these foreign mining firms.  “I believe church leaders in these countries would be interested to know the implications of mining activities of these firms,” he said.

He cited that bishops from the USA had asked him on the status of huge companies engaged in business in the Philippines.  “They asked me once how these companies operate in our country especially on the wages they give to their employees including the benefits,” he said.

He also brought the possibility of setting-up human rights desk in every diocese in the country.  “These desks can help in the documentation of cases and even facilitate the provision of legal counsels to the poor victims so that cases could be filed in courts,” he said.

“We urged Cardinal Tagle to help us end the killings in Mindanao because of massive militarization and the entry of large-scale mining and agribusiness corporations,” said Dulphing Ogan, secretary general of Kalumaran, an indigenous peoples (IP) organization in Mindanao.

The tribal leader presented the recent killings of IP leaders in the island who only defended their lands against the intrusion of mining companies.  The perpetrators, according to Ogan, were identified as elements of the Armed Forces of the Philippines (AFP) and its paramilitary groups.  He also presented the trumped up charges against IP leaders saying, “These were intended to harass, intimidate and eventually silence the IP leaders.”

“Mindanao is sitting in gold and other precious mineral deposits,” Benedictine nun Sister Stella Matutina told Tagle.  She added the interest of foreign mining firms, like the Xstrata-Sagittarius Mines Inc. is the root cause of massive militarization and rampant rights abuses in Mindanao.

Matutina presented the case of the Blaan family in Tampakan, South Cotabato massacred by elements of the Philippine Army’s 27th Infantry Battalion.  The massacred killed pregnant Juvy Capion and her two children.

‘Don’t feed us to the wolves’

While happy with Cardinal Tagle’s response, Manilakbayan delegates got angered and were irked when Manila Auxillary Bishop Broderick Pabillo offered “an unacceptable proposal” to the human rights victims present during the dialogue.

Pabillo said he could arrange a dialogue between the generals of the AFP and the victims of human rights violations who joined the Manilakbayan.

“It’s like feeding the lambs to the wolves,” a delegate who asked for anonymity told davaotoday.com.

Peasant leader Aida Seisa who was among the delegates said, “Ipakaon man niya mi sa mga buaya (It’s like he’s going to feed us to crocodiles).”

Despite the refusal of the Manilakbayan delegates, Pabillo insisted on his proposal saying he knew the generals of the AFP and the PNP, adding that they would listen to the complaints of the victims.

Nardy Sabino, the general secretary of the Promotion of Church People’s Response (PCPR), said the problem of human rights violations in Mindanao could not be resolved by a mere meeting with the top brass of the military and the police.

“Rampant violations of human rights in Mindanao is rooted on the government’s policy of Oplan Bayanihan coupled with the interests of foreign business firms who wanted to engage in large-scale mining in the area,” Sabino told Pabillo.

“We are alarmed and disappointed that human rights violations have continued and in fact have increased and that a climate of impunity prevails since no alleged perpetrator has been successfully prosecuted,” PCPR said in the letter.

Even religious groups are not spared from human rights violations, the letter added, citing cases of the assassination of church workers, illegal arrests and detention.  It noted that from 2001 to 2007, there are 26 cases of extrajudicial killings of church leaders with seven cases of illegal detention and torture.  It added that from 2008 until now, there have been 13 cases of human rights violations against clergy and active lay leaders of different religious denominations.

“We come to you with great hope and encouragement as we believe that the Filipino people has a ‘kakampi’ in you in pursuing justice in our land,” the PCPR letter read, urging Tagle “to call on President Aquino that the killings be stopped and the climate of impunity be ended by going after the perpetrators of human rights violations.”  (Alex D. Lopez/davaotoday.com)