PNA: We do not publish ‘fake news’ 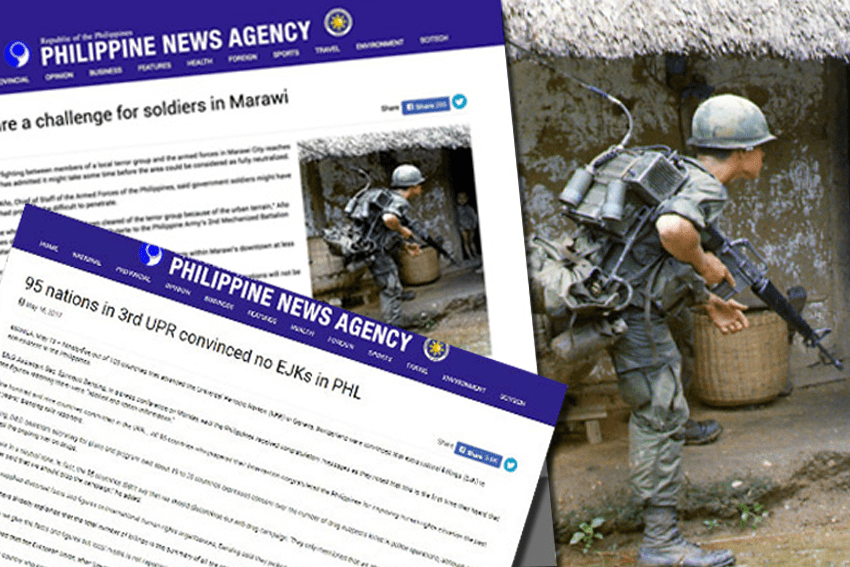 DAVAO CITY, Philippines — State-owned news organization Philippine News Agency said it was a “lapse in judgement,” not the intentional misinformation that resulted into two instances of erroneous publication last week.

“While there have been lapses in our judgment, it has never been the policy of PNA to tolerate erroneous report, and it has certainly never been our intention to sow misinformation, much less share what is termed nowadays as ‘fake news’,” the PNA said in a statement.

“We regret that these mistakes have cast doubt on our integrity as a news agency. Rest assured we have dealt with our erring personnel and that we are reviewing our procedures on reportage as we continue to uphold our commitment to deliver accurate and balanced news reports to the Filipino people and the world,” it added.

On May 27, social media users quickly called out PNA for using a cropped version of a Vietnam War-era photo of soldiers patrolling rural communities. The photo was used as a thumbnail for a story titled “Urban warfare a challenge for soldiers in Marawi.”

The photo in question was taken on October 6, 1966 and depicted “Troops of ‘A’ Company, 1st Air Cavalry Division, checking house during patrol,” according to its Wikimedia commons page. The image was sourced from NARA National Archives and Records Administration.

PNA later removed the image but not before the page was shared and commented on by discerning Facebook users.

The PNA also came under fire after it published a story titled “95 states convinced there are no EJKs in PHL,” a story revolving around the statements reportedly made by Department of the Interior and Local Government Assistant Secretary Epimaco Densing III.

Densing denied that he ever issued such a statement. Five days later, the PNA took down the story, and published a corrected version titled “PHL’s human rights situation commended at UPR.”

Adding to the fire, National Union of Journalists in the Philippines also castigated the PNA, averring that it has been used to “legitimize blatant manipulation of the truth.”

“We do understand the need for PNA and other state-affiliated outfits to project as strongly as possible the government’s side on current issues and controversies. But does that include peddling falsehood?” the NUJP said.(davaotoday.com)