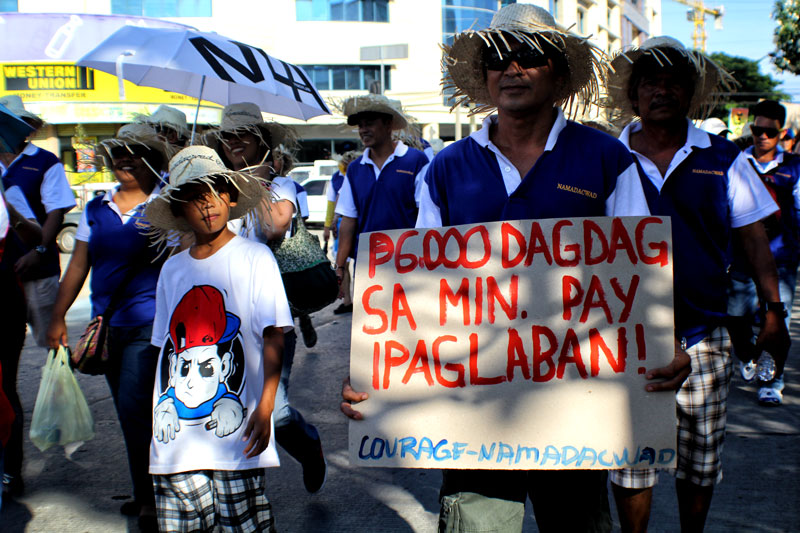 Government employees like those from Davao City Water District are fighting for PHP 6,000 increase in their salary. (davaotoday.com photo by Ace R. Morandante)

DAVAO CITY, Philippines — Amidst the demands of various labor groups for an increase in wages, at least for a modest economic relief, President Noynoy Aquino has not even given non-wage benefits to workers.

“This only shows Aquino’s ‘clear line’ on workers and other issues,” labor leader and second nominee for Anakpawis party-list Joel Maglungsod told davaotoday.com Wednesday, during the 127th celebration of International Labor Day participated by more than a thousand workers, employees and support groups in the city.

Maglungsod said that all workers, no matter what federation, organization or labor center they belong, “need an increase in their wages and benefits.”

This as a family of six in the National Capital Region (NCR), for example, needs PHP 1,034 per day for decent food, clothing, shelter, transportation and communication, according to estimates by the independent think-tank Ibon Foundation.  The amount does not even include education and hospital emergencies.

In the NCR, the daily minimum wage for workers at the agriculture and non-agriculture sectors, respectively, are PHP 419 and PHP 456.  In the Davao Region, it’s pegged at PHP 301 and PHP 291.

Maglungsod lamented that under Aquino, workers haven’t gained anything, worse, they have nothing to expect.  He said that instead of making substantial changes to the economy or creating policies for the good of the people, Aquino has “instead demolished homes, privatized hospitals and government schools by means of Private-Public Partnership.”

Aquino, during his Labor Day speech, said there are 2.9 million Filipinos who are jobless while 7.9 million don’t have enough work.  He added more than 600,000 Filipinos have just joined the labor force this year.

But he boasted that there are “large-scale changes” the country has achieved, citing the “rush of investors” and the “investment grade rating” the country has “garnered for the first time in our history.”

He added that stock exchange index has breached the 7,000 mark, and the near-daily all-time highs.  He claimed “these have direct effects on workers and investors.”

“You will notice, back then, when oil prices increased, prices of rice, canned goods, and other products would also automatically increase.  But now, our country’s inflation rate is at 3.2 percent, the lowest in the past four years, which explains why the prices of basic commodities and other goods have remained stable here in the Philippines,” Aquino said. 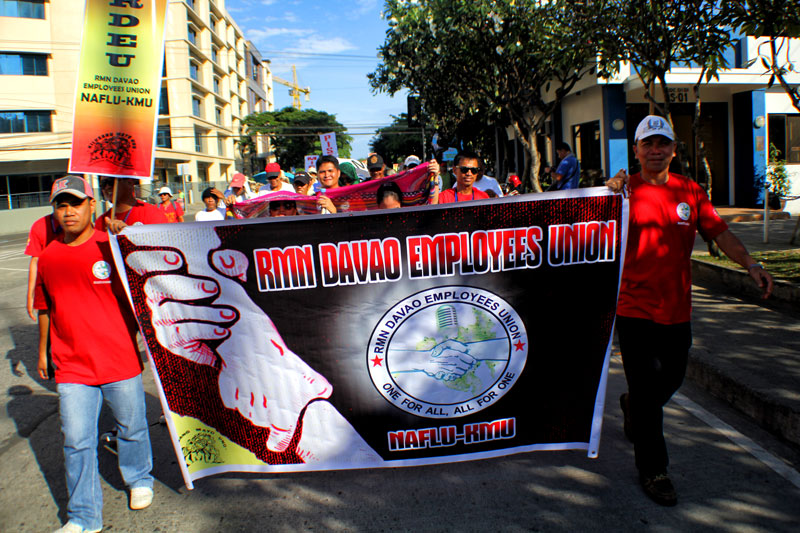 Beyond the President’s rhetoric, Maglungsod said, the government only created more policies which are “anti-workers,” not to mention, he added, the usual role of the Department of Labor and Employment (DOLE) of being “in connivance” with capitalists.

In his speech, Aquino said his government is after those who are using the “555” scheme or “the abusive practice of renewing contracts every five months.”  He added the government “allocated 180 million pesos to DOLE” which allowed the department to hire an additional 372 Labor Law Compliance Officers “to help identify and apprehend those abusing our labor laws.”

But Maglungsod scored the move, saying, the Aquino government can’t even implement laws.  “Many are abusing our workers and not implementing laws on labor standards,” he said.