DAVAO CITY, Philippines — Memoranda citing intelligence reports of possible terror attacks in some areas in the country are making its rounds in social media.

But authorities are urging the public to identify fake news from real ones as police officials continue to verify the release of the said memorandum here on Monday, June 19.

Police Chief Superintendent Manuel R. Gaerlan, regional director of the Police Regional Office 11 on Monday, said: “We cannot confirm or deny as of this time. The public is advised to discern what is true and fake news.”

A similar type of memorandum was posted by the Presidential Security Group Facebook Page labeled as a “fake” document Tuesday, June 20.

“From our PNP, this is fake. Don’t be affected by these kinds of disinformation,” it said. 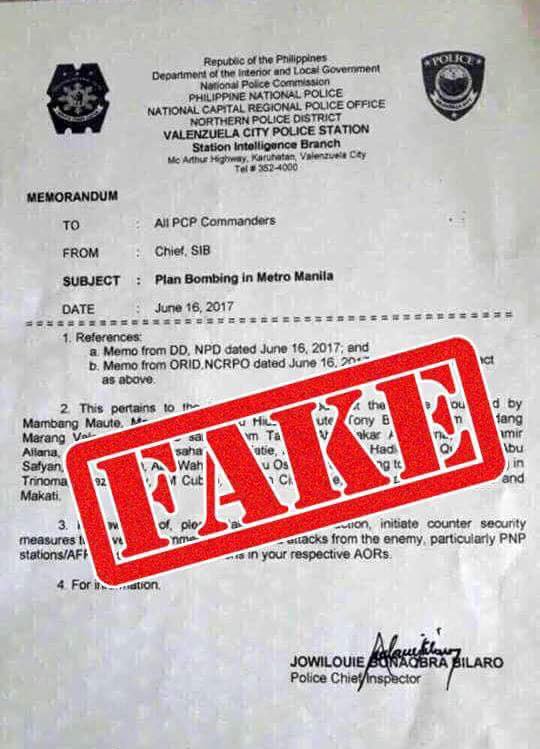 Authorities also warned the public of sharing the contents of the memoranda as this would cause panic among residents.

“Ang mga ingon ana dili dapat ikalat kay makacause og panic. Wala pa man nato na-verify kung asa na gikan ug nganong nigawas ang kana nga information (Those information should not be shared in public as it might cause panic. We have not yet verified where it came from and why that information got out),” Dela Rey said.

Dela Rey said the best help that the public could do is report suspicious activities and individuals to authorities to thwart possible threats.

“Let us be vigilant so we can avoid the same incident which happened in Marawi City, it was a lesson learned. Be our eyes and ears,” she said.

Neri added that whether threats are “true or not” the Army is not letting its guard down.

“Itong Davao City kasi parang seat of government na to. Tagarito ang Presidente, maraming mga events and activities ang national level na dito ginagawa kaya talagang hindi pwedeng magbaba ng alert level (Davao City is like the seat of government because the President is from here and there are many national events and activities happening here so we maintain a high alert level),” he told Davao Today in an interview.

“Iba po yung impact pag may nangyari dito, pang-international level (If something happens here, it has a different impact),” he said.