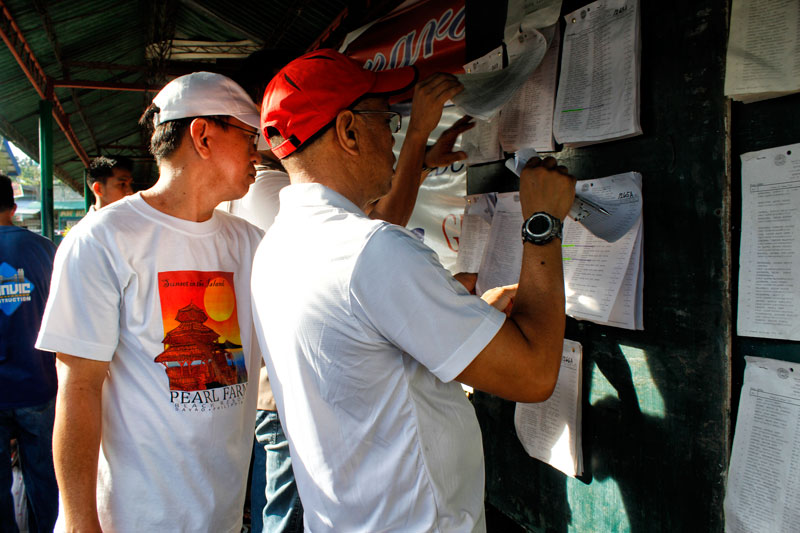 The machine started rejecting ballots at past nine in the morning forcing the BEIs to shut down the machine.  To the dismay of first-time voters who were excited to experience casting their votes the automated way, the ballots were dropped manually at the PCOS machine bin, before BEIs took it out and placed it in a separate folder for counting.

Davao Today went back to one polling place in Davao City’s first district it covered in 2010 to compare how the automated elections fared this time.  This time around, the board of election inspectors (BEIs) had to contend with the problem of PCOS (precinct count optical scan) machine breakdown.

In clustered precinct 212 of Cesareo Villa Abrille Elementary School in Bucana of 76-A village where 947 voters are registered, the PCOS machine crumpled the ballot of the 71st voter.  The machine started rejecting ballots at past nine in the morning forcing the BEIs to shut down the machine.

To the dismay of first time voters who were excited to experience casting their votes the automated way, the ballots were dropped manually at the PCOS machine bin, before BEIs took it out and placed it in a separate folder for counting.

The Commission on Elections (Comelec) monitoring team was around at that time to check on the problem in clustered precinct 212.  The team asked the BEI chair to reinitialize the PCOS and asked a voter to feed the ballot.  But it still did not work.

“Natiaw man tingali ta (We  might have been jinxed),” Harold Lovintos, the BEI chair of clustered precinct 212 jested, visibly worried as it was already about 10 in the morning and hundreds more are waiting to cast their votes.

Jojo Amora of the Comelec monitoring team proposed that Lovintos open the back-up compact flash card compartment and take out the card, and tried feeding another ballot but the same problem happened.  Amora said the problem was the lens of the PCOS machine scanner.

Lovintos tried to feed another ballot in the machine and this time it was accepted. But the succeeding ballots were still rejected.  The BEIs decided to shut down the PCOS machine by around 10:30 AM and instructed to voters to drop the ballots in the PCOS bin.

At another clustered precinct 214, the PCOS machine got jammed as the first voter of the precinct fed his ballot.

Asked of their alternatives, Lovintos said they might try re-initializing the machine later to see if it will still work.  Otherwise, they would just have to go ahead with asking voters to drop their ballots to the PCOS bin manually.

John Abellana, a PCOS machine technician assigned to five clustered precincts explained that chances are, they would have to wait for the user of another PCOS machine to finish, before they can use it to count the ballots and electronically transmit the votes.

Lovintos said another plan would be to bring the ballots to the canvassing area at the Sangguniang Panlungsod after the voting closes by 7 PM.

Changes noted in the voting process

Davao Today observed that clustering of precincts changed compared to last 2010.  But the major change is the voting process, particularly in the validation of ballots.   In 2010, ballots were validated by the BEI Chair using the handheld ultraviolet scanner, but this time, this process was omitted.

Also, the process where voters were asked to affix their signature and thumb mark on the Election Day computerized voters list before exiting the polling place was removed.

Long queues outside the polling place were still, however, visible.  The room is so small and only about nine voters are seen shading their ballots at a given time.

Problems of missing names in the voters’ list still persist.

Marjohn Abejuela, a resident of Bucana, came to the polling precinct as early as before 7 AM but at 10 AM he still could not find his name on the voters’ list in the room.  He found his sister’s name though.

He tried to check his name in the hard copy of the masterl ist of Davao City’s First district voters being held by the National Movement for Free Election (Namfrel) volunteers and the Parish Pastoral Council for Responsible Voting volunteers but he still could not find it.

Emerita Mapula, the school principal who serve as Department of Education Precinct Supervisor said Abejuela should try checking it with the Comelec District One Office at Magsaysay Park.  She explained that there are three schools serving as polling places for residents of the vote-rich Bucana village, one is in SIR Elementary School and the other is Kabacan Elementary School.

But Abejuela gave up looking, “Kapoy na unya dili pa gihapon ka sigurado kung makit-an nimo imong pangalan didto (It’s tiring, and I am not sure whether I would find my name there),” he explained.

Erland Alindajao, a volunteer of Namfrel said they can count at least more than 100 people coming to them for assistance as of 9:30 AM, and 30 percent of them failed to find their names.

The lines to the precincts swelled at around 10 AM.  But whether the voters’ turnout will be good remains to be seen.

Snail-paced voting, the heat and discomfort in polling places mostly discouraged voters in the 2010 elections.  In clustered precinct 212 last 2010 elections, where 892 voters were registered, only 492 were able to vote at the end of the day.