The ice cream vendor pleaded to no avail, and even as he asked the team to carry the cart carefully, the demolition team turned the cart sideways causing ice to pour out on the road.

Davao Today tried to interview the vendor but he was off with his co-vendors chasing the truck.

The man caught up with the unit along the corner of City Hall Drive taking away ukay-ukay stalls in the road. He asked them if he can retrieve his day’s earnings which were stashed inside the cart, but he was told to claim it at the Almendras Gym where the confiscated items will be kept.

Ukay-ukay vendors told Davao Today they were taken by surprise with the confiscation as they were abiding by the Mayor Rodrigo Duterte’s policy to occupy one-third of the sidewalk.

“We put our wares on the side. I didn’t expect them to do this.  They even took items we kept away,” said Nurhata Mama, who said she has been selling the ukay-ukay for years.

Nurhata pointed to an ice-water vendor in the sidewalk and asked “Why are her items not taken away? Why single us out?”

“We’ve been doing this for years, even before I had my granddaughter,” cried another vendor named Norhaida.”Now what do they want us to do? We still have to pay for five-six (a loan system).”

The vendors who were demolished last Sunday went to Almendras Gym to look for their items.

“We want to talk with them (Jimlani), just give us one day like Sunday for this,” said Norhaida.

But they had to wait for another hour as Jimlani led his team towards Magsaysay Avenue (formerly Uyanguren Street) where they confiscated more ukay-ukay wares and a trisikad.

An elderly vendor engaged demolition personnel in a tug-of-war with his items, which prompted Jimlani to shout “Arestuhon na! (Arrest him!)”; this prompted the old man to back off.

Jimlani later told Davao Today that they are willing to return the confiscated items; as long as vendors will issue an affidavit that they will not repeat their offense.

“The law is still lenient, some can still recover these, what they can do is write us, and if the government will consent to return these, but they should issue an affidavit of undertaking that they will not repeat this. But if they do it again, we will be filing charges,” Jimlani said.
In the past, Mayor Rodrigo Duterte enforced a policy of vendors allowed to only occupy one-third of the width of a sidewalk and leave the two-thirds to pedestrians.

But Jimlani said the mayor has been incensed by “disrespect” of the policy on sidewalk vendors especially those who occupied areas outside City Hall.

“You get irritated. We have repeatedly appealed to them. But they are insulting the seat of the city government (by selling) right there, right in the heart of the city,” he said, adding that the mayor even ordered violators to be arrested.

He added vendors have been “hard-headed” as they go back to their spot once the demolition team finished their round.

Jimlani also got incensed on a melee created by Muslim vendors two weeks ago, whom he claimed “used” 20 women and 10 children and shouted “Jihad” and “Allahu Akbar”.

Jimlani, a Tausug, said “under the Koran there is no such Jihad like this. When you declare Jihad  that is the last resort of a Muslim. Sila na nga tinulungan ng gobyerno, sila pa nag-declare ng ganun. (The government is helping them, yet they declare this). This is nothing religious, we just want them to respect the law. In fact we are giving them a chance”

Jimlani warned that more demolitions will happen as Christmas season is approaching. “We might be doing this every day,” he said.

Meanwhile, an urban poor leader, Leo Bolcan of Kadamay, criticized the city’s demolition coming at Christmas as it means promoting tourism and income for the city at the expense of the livelihood of the poor.

Bolcan said while it is lamentable how street vendors are being treated as eyesores by the local government, it is Jimlani who is violating the rights of the vendors by leading the demolition.

“Mangtas (siya). Dapat i-uli sa tag-iya ang mga gikuha, kay gikapitalan man na, ug human rights violation kana. Dapat maghugpong ug kasohan siya (He’s ruthless. He should return what he has taken, because these items were invested by the vendors and what Jimlani did constitutes a human rights violation. The vendors should unite and sue him),” said Bolcan. (Tyrone A. Velez, davaotoday.com) 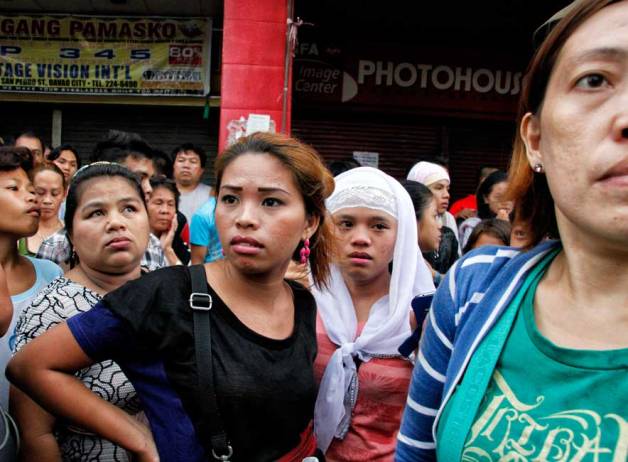 Muslim vendors are shocked by the operation of the demolition team that confiscated their ukay-ukay items along City Hall Drive. (davaotoday.com photo by Medel V. Hernani) 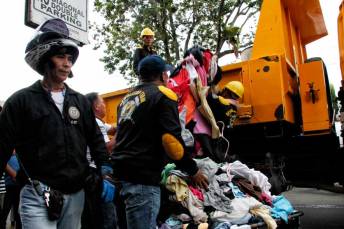 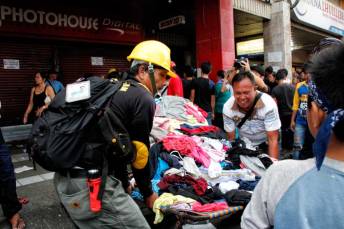 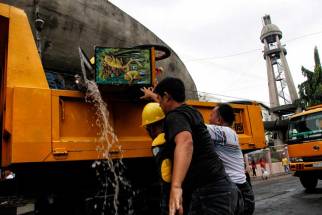 Ice and water pour out from the ice cream cart as it got tilted sideways during the demolition of sidewalk vendors. (davaotoday.com photo by Medel V. Hernani) 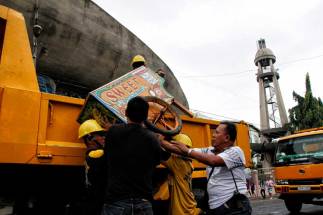 An ice cream cart gets carted by the demolition team in front of the San Pedro Cathedral in San Pedro Street. (davaotoday.com photo by Medel V. Hernani) 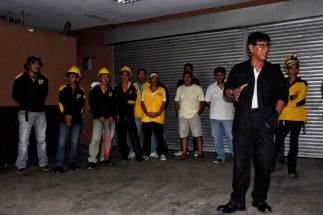