MANILA, Philippines — It has been three years since Xandra Bisenio’s father, Rey Casambre, was arrested and detained on trumped-up charges. Her family’s agony seems unending.

Casambre is a consultant in the peace negotiations between the Philippine government and the National Democratic Front of the Philippines (NDFP). For decades, he has advocated for peace based on justice, serving as the executive director of the Philippine Peace Center. His arrest came on the heels of a series of threats and attacks against peace consultants, following President Rodrigo Duterte’s unilateral termination of the peace talks.

This unilateral termination of the peace talks has since halted negotiations on the social and economic reforms, the second agenda in the talks between the Philippine government and the NDFP. This would have included free land distribution to farmers, just pay and better working conditions for the ordinary folk, to name a few.

But instead of addressing these, the likes of Casambre were put behind bars. Others were forcibly disappeared and killed under the present administration.

With the election season, Bisenio said she is very much critical of the statements of presidential candidates on how they plan to address the roots of the armed conflict in the country and resuming peace talks.

READ: Timeline | Attacks on peace consultants under the Duterte administration

“I have told Tatay’s story so many times, yet I still find myself asking the same questions: How can the system prove that Tatay was a terrorist when all he did was teach and build unities for peace based on justice. Why is the government so scared of people like him for them to do this?” Bisenio told Bulatlat in an interview.

The presidentiables’ stand on the peace process

For Bisenio, an activist herself, presidential candidates should both have genuine plans to address the people’s social and economic difficulties, and a commitment to honor previously-signed agreements for the betterment of the people.

Ferdinand Marcos Jr., son of the late dictator, and running mate Sara Duterte, the daughter of President Duterte, are unwilling to resume peace negotiations, saying that “there’s nothing else we can say but to treat them as enemies because they are fighting us, and as such, we need to defend ourselves.” This only shows the tandem’s militarist approach and ignoring the roots of the armed conflict.

In 2019, Mayor Sara Duterte asked that Davao City be excluded from the national government’s Christmas ceasefire and should it eventually decide to resume the formal talks. While most candidates have so far expressed their willingness to resume the peace talks, they are eyeing to pursue “localized peace talks.”

This refers to the Philippine government directly talking to members of the New People’s Army, the armed wing of the Communist Party of the Philippines. However, the NDFP has long said that the issues at hand are of national scope, and that the 1986 peace talks showed that localized talks are only used for psywar and intelligence operations against the people.

Peace talks are also traditionally held abroad or in places mutually acceptable to both parties as seen in the experience of other countries all throughout history (i.e. Russia-Ukraine talks in Turkey, the Columbian peace process in Havana, Cuba). In the Philippine experience, the country’s peace negotiations with the Moro Islamic Liberation Front were facilitated by the Malaysian government.

Sen. Panfilo Lacson, the author of the controversial Anti-Terror Law, said he is pushing for localized talks because there are particularities in the conditions at the community level. He also said that Jose Maria Sison, founding chairman of the Communist Party of the Philippines, should not be allowed to negotiate. 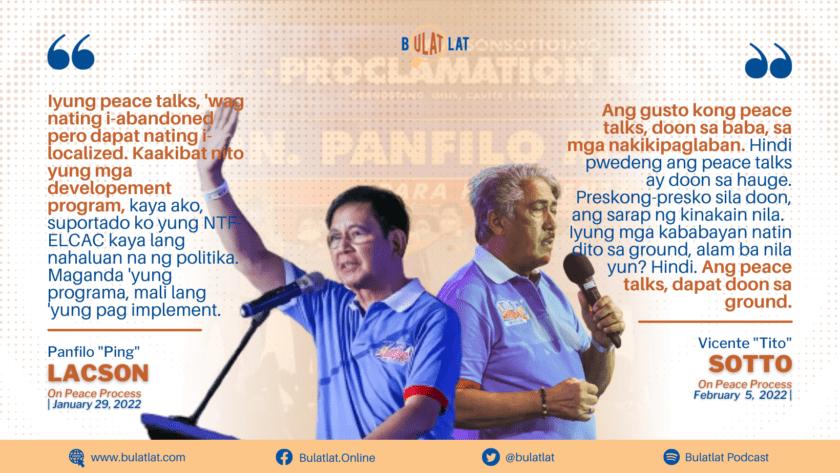 Lacson said these localized talks will be coupled with development programs, and later expressed support for the National Task Force to End Local Armed Communist Conflict (NTF-ELCAC), which has been notoriously red-tagging of activists and those critical of the Duterte administration. The NTF-ELCAC’s development programs, too, have been flagged by the Commission on Audit in 2021.

Meanwhile, Presidential candidate Vice President Leni Robredo said she wants to have different approaches in resuming peace talks, which will also include localized discussions and incentivizing villages with the Barangay Development Fund. Manila Mayor Isko Moreno, who served as an observer in the 2016 peace talks, said he is also open to resuming the peace negotiations. Labor leader Leody De Guzman has so far been the most logical in dealing with the armed conflict, recognizing the social injustices as the root cause.

De Guzman said he wants to focus more on the demands of the NPA, saying, “our citizens wished to have land reform, and that was agreed on, but it was not implemented. We should implement that.” Sen. Manny Pacquiao believes the same. In an interview, he said, “for me, those who took up arms because of poverty, their needs were not met, and they were left with no option but to take up arms to achieve justice.” His running mate Lito Atienza has not issued any statement yet regarding peace talks.

Before the Duterte administration unilaterally terminated the peace talks, Bisenio noted the unprecedented track that the parties were taking, particularly in the aspects of free land distribution and the eventual signing of the Comprehensive Agreement on Social and Economic Reforms (CASER). She said this is where the next presidential candidate should frame their peace program.

But with the Anti-Terrorism Act in place, Bisenio said it would be difficult to have a conducive atmosphere for peace talks to resume. Last year, the Anti-Terrorism Council, with its unbridled and vast powers, designated Casambre and other detained peace consultants as terrorists.

It has, also, designated the CPP and the NPA as terror groups.

READ: The members of the Anti-Terrorism Council and their track record

“When Duterte signed the Anti-Terror Law at the beginning of the pandemic, he just proved that this administration is nothing but pure evil and they can, and they will attack anyone,” Bisenio said.

READ: Why presidentiables’ stand on terror law is an election issue

Bisenio said, “The attacks on peace advocates manifest that the current Duterte administration has no interest in meeting people’s needs and solving the socio-economic issues we’re facing. It does not care for its people, and it is clear that it is big businesses to whom it is obligated at all costs to make profit-taking easier – and at the expense of the people. People will resist as long as their fundamental rights are suppressed and demands are not met.” (reposted by davaotoday.com)