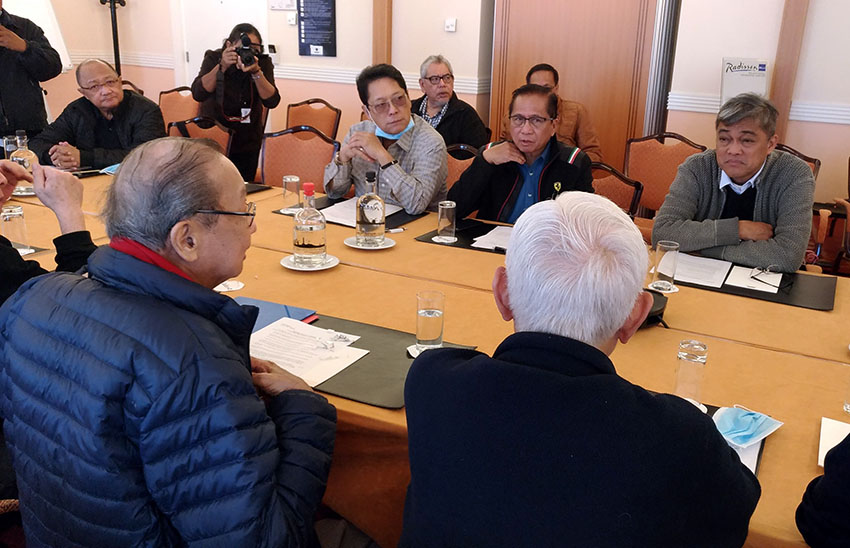 Negotiators of the government and the National Democratic Front of the Philippines meet in a panel to panel meeting on April 2 in Radisson Blu Palace Hotel in Noordwijk, the Netherlands to discuss the agenda for the 4th round of the peace talks. (davaotoday.com file photo)

DAVAO CITY, Philippines — Gabriela Women’s party Representative Arlene Brosas stressed that addressing the roots of the armed conflict must take precedence over the crafting of a bilateral ceasefire agreement.

“How can we talk about the ceasefire when the events on the ground do not reflect what we are trying to achieve in the peace talks? The first agenda should be how to implement social economic reforms,” she said.

Speaking at a press conference on Monday here, Brosas said only the rich businessmen and landowners are benefiting from the country’s current policies.

“Tuition is still not free. We are still not able to send all of our children to school for free in all levels. Hospitalization is still expensive. Privatization, liberalization, and deregulation are still rampant. That is the kind of policies that we have, and that does not benefit the common people,” she said.

Brosas said she is hopeful that the product of the ongoing peace negotiations between the government and the National Democratic Front would “benefit the common people.”

“Sana ang una nilang isipin ay kung paano maiibsan yung kalagayan at kahirapan ng mga maliliit nating mamayan” (I hope the first thing in their minds is figuring out how to alleviate the poor conditions of our common people), she said.

President Rodrigo Duterte in several interviews signaled his intention to broker a bilateral ceasefire with the communists as soon as possible.  Duterte even made it as a precondition before releasing more political prisoners.

During the 4th round of talks held in Rome on April 3 to 6 in the Netherlands, both the government and NDFP panels signed an “Interim Joint Ceasefire” which is technically not a truce, but only an agreement to “finalize the rules governing the ceasefire.”

The peace negotiations between the government and the NDFP has four major agendas: Respect of Human Rights, Social and Economic Reforms, Political and Constitutional Reforms, and the Cessation of Hostilities and Disposition of Forces.

The Comprehensive Agreement on the Respect of Human Rights and the International Humanitarian Law was signed during the term of President Joseph Estrada. Talks for the Comprehensive Agreement on Socioeconomic Reforms have been ongoing between the government and the NDFP through the succeeding presidents, but have only hit breakthroughs during Duterte’s administration.

The six month unilateral ceasefires declared by both the New People’s Army and Duterte broke down after several clashed erupted on February. Duterte also cancelled the peace negotiations and the immunity guarantees of the NDFP consultants.

The talks however, were revived through back channeling negotiations. The fifth round of peace talks are scheduled from May 27 to June 2 in The Netherlands. (davaotoday.com)