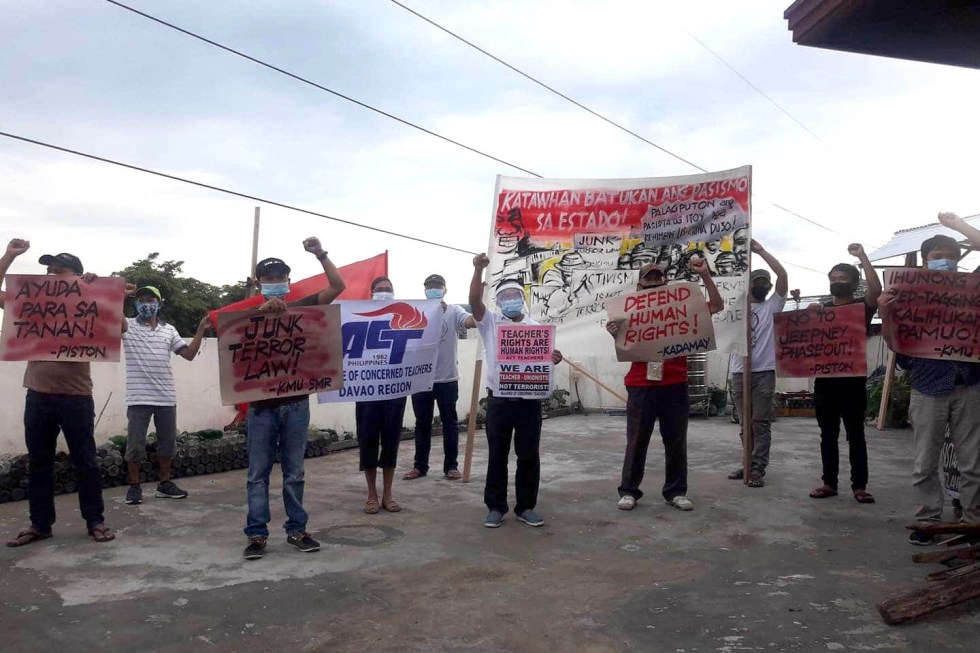 Progressive groups conduct a protest program Monday afternoon at the Kilusang Mayo Uno Davao office, after being frustrated by police imposition of quarantine rules that forced them off from their supposed rally at Freedom Park.(Kath M. Cortez/davaotoday.com)

DAVAO CITY, Philippines – The supposed first street protest of progressive groups in Davao City since the lockdown during the President’s fifth state of the nation address on Monday, July 27, was marred when Davao City Police suddenly put up barriers and requirements for rallyists at Freedom Park along Roxas Avenue.

The Kilusang Mayo Uno, which announced the rally would be held at 3 pm, canceled the event after a near one hour of negotiations with officials of Davao City Police Office (DCPO) failed to reach a compromise, and proceeded with an online protest in their office.

Authorities arrived at Freedom Park around 1 pm to cordon the park, put up barriers, and set up 50 chairs which they said rally participants should sit to ensure physical distancing.

DCPO informed organizers that they will be allowed to hold their rally with three requirements: that each participant would wear a face mask, bring an alcohol and present their food and medicine pass.

Dizon said the requirements came all of a sudden, and most of the protesters either did not bring their pass or their pass was set for another day.

“We asked them to let us proceed with a short program outside the cordoned area if they will not allow us to enter Freedom Park but authorities said they will arrest us if we push through,” said Dizon. 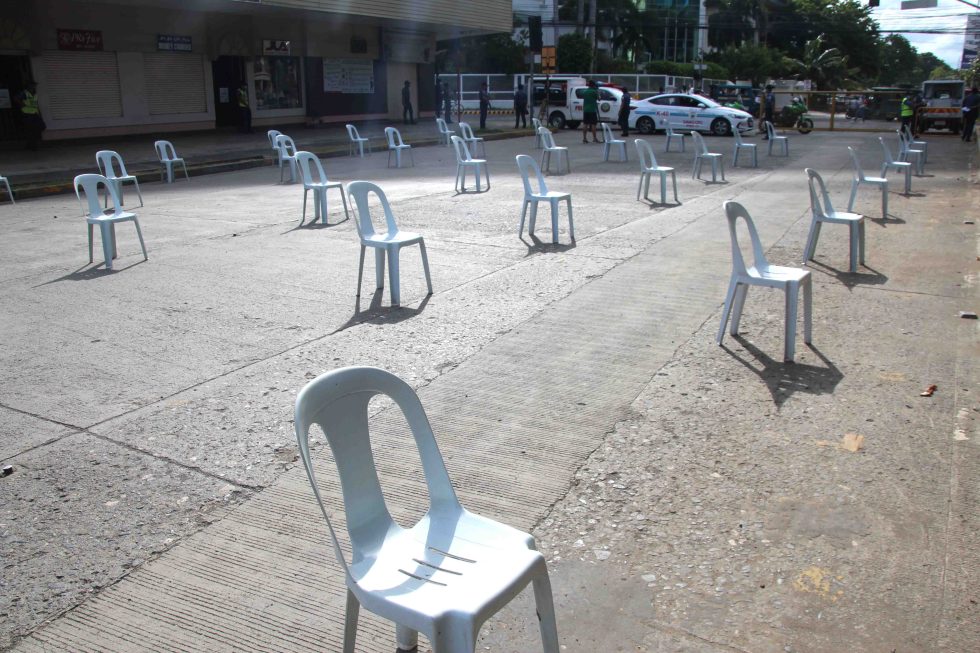 Chairs remain empty inside the cordoned area of the Freedom Park where protesters cancelled their event here, as authorities insisted they should sit to observe social distancing while having their protest action. (Kath M. Cortez/davaotoday.com)

In a public advisory on Sunday evening, the City Government of Davao only required individuals who are planning to join the protest to “strictly observe physical distancing and keep 2-meter spaces from each other, to wear face masks properly all the time, and to bring your personal alcohol for handwashing.”

Police Major Jack Tilcag in an interview said the City Health Office set the requirements to avoid the spread of the virus and will not allow protesters to proceed with any activity without following the standard protocol of the city government.

“Actually they negotiated not to do the protest in the area with chairs and wanted to have their program standing in the side [of Freedom Park] for a while just to air their grievances but I said I cannot allow them because we have to enforce [rules] due to pandemic,” Major Tilcag said. 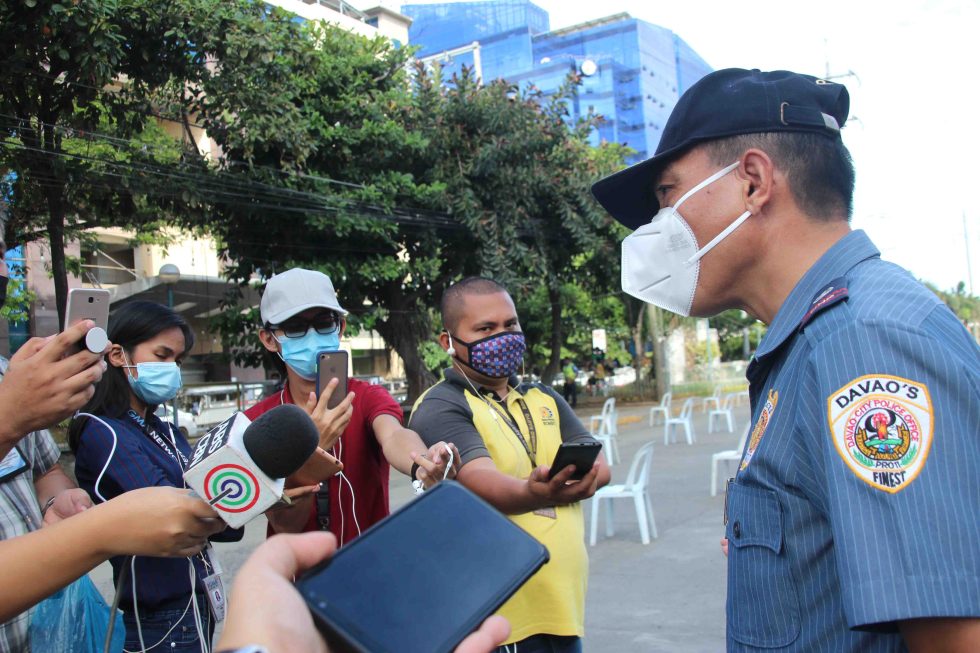 Police Major Jack Tilcag in an interview with local media said they will not allow protesters to enter the Freedom Park unless they follow the set requirements of the City Government . (Kath M. Cortez/davaotoday.com)

Apiag said the protesters were knowledgeable of the safety protocols.

“Despite the fact that we have already been assuring the authorities that these protesters are following health protocols, they still show the public that they impose power and treat us like children by providing us chairs as if it will project them as good Samaritans,” said Apiag.

DCPO earlier announced the whole city is under Red Alert Status during the 5Th SONA of the president.

The progressive groups conducted a protest action at the KMU office instead late afternoon.

Displaced Manobo Lumad also conducted a program inside the UCCP Haran compound to air their opposition against the Anti-Terror Act and the government’s plan to allow plantations and mining companies to enter their ancestral territories. 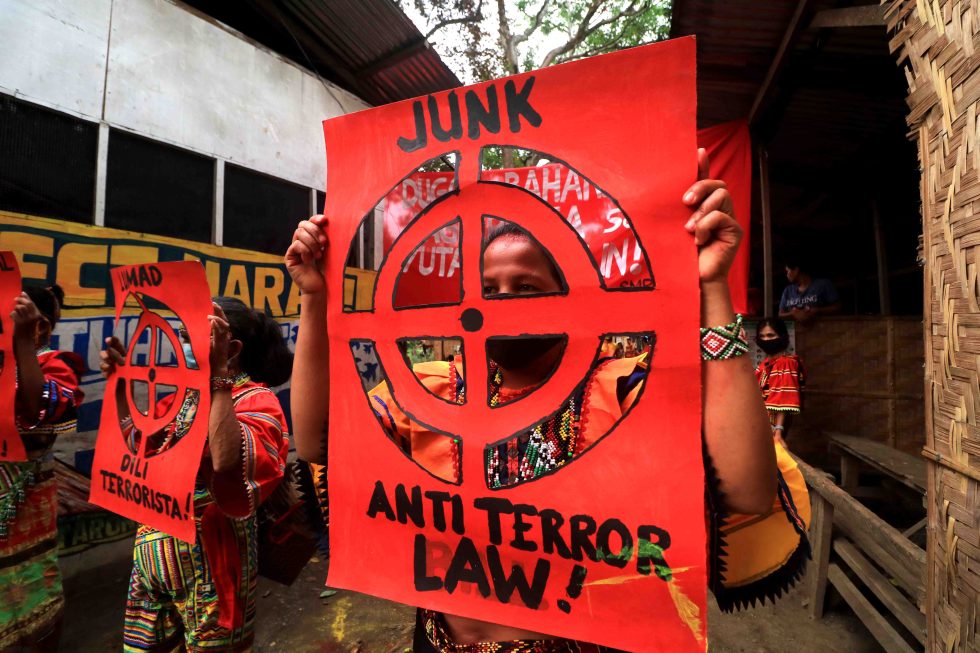