Red-tagging of NUPL and other groups legally punishable 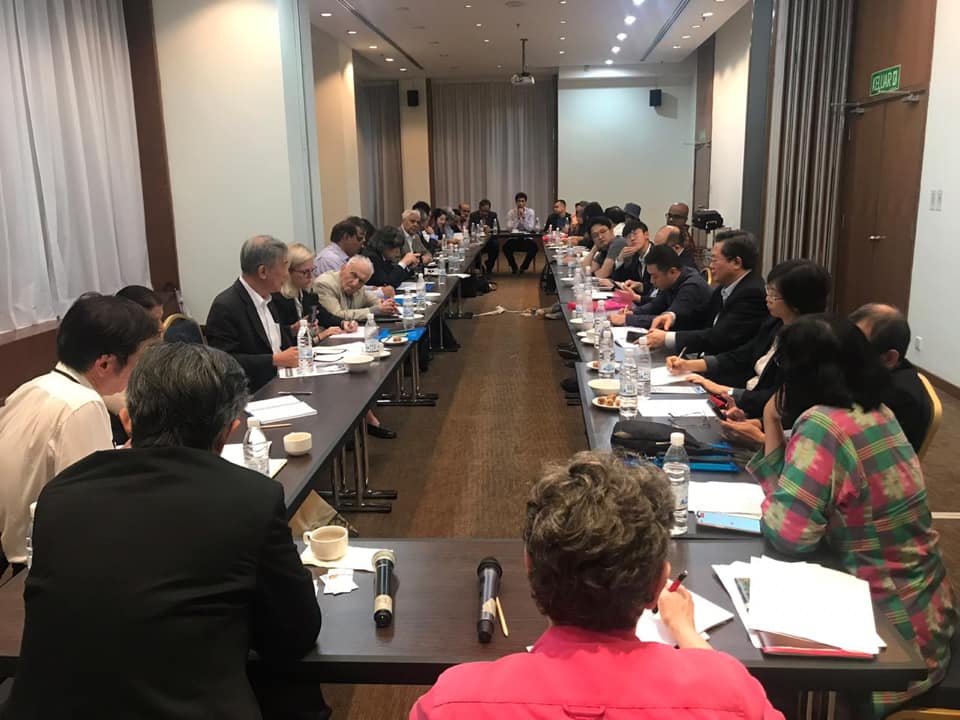 Members of the International Association of Democratic Lawyers (IADL) denounce the red tagging of NUPL during its Bureau meeting held recently in Kuala Lumpur. (Photo courtesy of Edre Olalia)

DAVAO CITY, Philippines – The International Association of Democratic Lawyers (IADL) called on the Philippine military to immediately cease and desist its red-tagging against the lawyers’ organization National Union of People’s Lawyers (NUPL)

IADL made the call after Armed Forces of the Philippines (AFP) Deputy Chief of Staff Major General Antonio Parlade recently made remarks against human rights group Karapatan, NUPL, party-list groups, and some non-governmental organizations, linking them to the Communist Party of the Philippines (CPP) and its armed wing, the New People’s Army (NPA).

“Don’t blame the government for your being tagged as Red. You have always been Red by the way you respond to situations. Your name is all over the Red websites,” Parlade said in a statement on Friday.

In a resolution, the IADL strongly denounced the public statement of Parlade, saying that the tagging was “irresponsible, slanderous, and legally punishable.”

The IADL said the red-tagging made by the Philippine military against NUPL violates Article 18 of the UN Basic Principles on the Role of Lawyers (1990).

It cited that: “Lawyers shall not be identified with their clients or their client’s causes as a result of discharging their functions.” Doing so would deprive the people of their access to justice and basic right to counsel guaranteed by Article 14 of the International Covenant on Civil and Political Rights.”

The international association of lawyers warned that such “hate speech” may also constitute a violation of Article 20 prohibiting advocacy of hatred that constitutes incitement to discrimination, hostility, or violence.

It also noted that it is contrary to Article 16 of the Basic Principles that mandates governments to ensure that lawyers are able to perform all of their professional functions “without intimidation, hindrance, harassment, or improper interference.”

The IADL also commended the long track record of the NUPL in defending pro bono the economic, social, cultural, political, and civil rights of various persons and organizations, adding that as an active member of IADL, NUPL has defended the rights and welfare, not only of the people in the Philippines but other oppressed peoples in other countries.

“All of these put to doubt the veracity of the accusations made by Gen. Parlade,” the IADL added.

The group vowed to gather the broadest support of various legal organizations worldwide to put a stop to these “vicious attacks” against their colleagues.

NUPL president Atty. Edre Olalia, in reaction to Gen. Parlade’s “wild, malicious, actionable” allegation said: “You have crossed the line way too far. It is not only absolutely baseless, in fact, it does not legally hold water at all.

Olalia said that such allegation of the military official, on top of the public labeling and vilification of their members, has put the judges, prosecutors, public defenders, law professors, government lawyers, law students and paralegals who belong in their voluntary pro bono organization in even more danger.

“Absent any credible, competent and admissible evidence to even remotely give a semblance of veracity to this unabashedly fascist claim, we shall have you to court,” Olalia warned.

Records of NUPL showed that 36 lawyers, judges, and prosecutors have been killed since the start of the Duterte administration in 2016. (davaotoday.com)