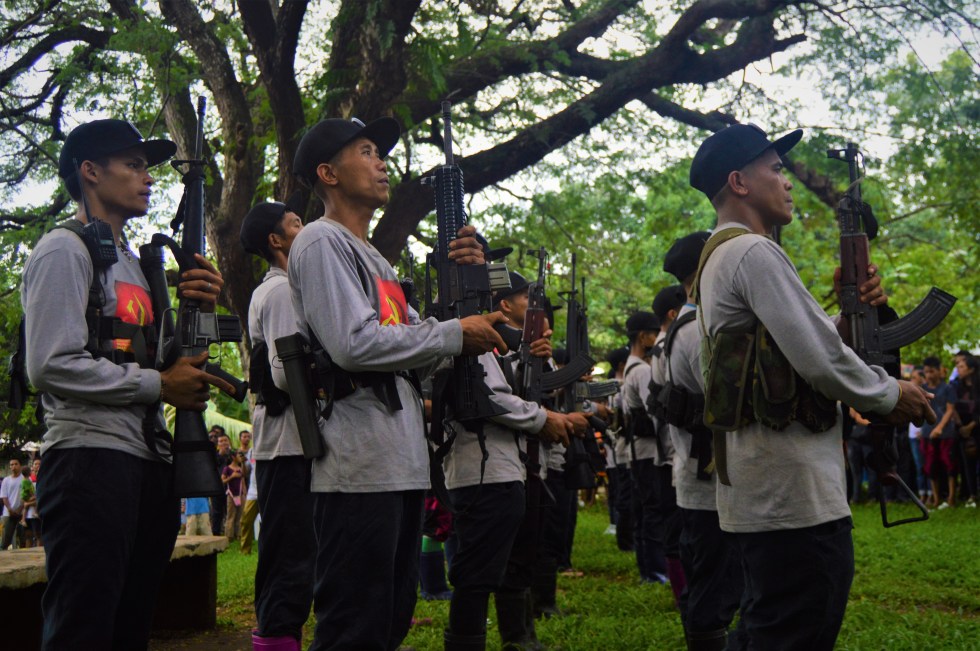 Young New People’s Army (NPA) rebels stand in formation during the recent anniversary of the Communist Party of the Philippines (CPP) in a town in Misamis Oriental province on December 26, 2016. (Jigger J. Jerusalem/davaotoday.com)

DAVAO CITY, Philippines — Anakpawis Partylist Rep. Ariel Casilao told the Duterte government that it’s better to resume the peace talks with the National Democratic Front of the Philippines (NDFP) than to aim for “another unreachable and fantastical goal” of ending insurgency on the country in the next three years.

Reacting to Defense Secretary Delfin Lorenzana’s announcement of a new three-year deadline to finish off the communist insurgency, Casilao considered the government’s new target as “unachievable”, saying Pres. Rodrigo Duterte should face the NDFP on the negotiating table.

“Instead of planning another unachievable target to finish the insurgency; the Duterte government should rather resolve the decades-old rebellion through resuming the stalled peace talks with the National Democratic Front of the Philippines,” Casilao said.

Duterte previously said the military might finish off the New People’s Army (NPA) before 2019 ends, claiming that many rebels already returned to the fold of the law.

Last December, the Communist Party of the Philippines (CPP) celebrated its 50th founding anniversary, leading the longest-running armed rebellion in the world.

NDFP Chief Political Consultant Joma Sison predicted that the military’s reset of deadline to finish off the NPA is bound to fail.

“The scheme will surely fail from day to day, week to week, month to month and from year to year as the NPA will intensify tactical offensives and mass work.,” Sison said in a statement on Wednesday.

Sison scoffed that the same military and police of the same exploiting classes cannot accomplish in 3 years what they failed to accomplish in 50 years.

“The problem with the Duterte regime is that it thinks peace negotiations are merely for the surrender and pacification of the revolutionary forces and that the sincerity of the NDFP is merely the willingness to surrender to the unjust ruling system of big compradors, landlords and corrupt bureaucrats like Duterte,” Sison added.

President Duterte, also on Wednesday, said the government could easily finish the NPA by dropping bombs on the rebel camps, had there been no civilians in the area.

(I control the waging of war, especially the use of bombs. If you land one here, we are all goners. But how about the civilians? Had there been no civilians, I would have just bombed them.)

The GRP and NDFP peace negotiators were supposed to meet on June last year to resume the stalled peace talks but President Duterte cancelled it.

Under CASER, agrarian reform and rural development and establishing a self-reliant national industry is to be realized, according to Casilao, saying that these are key factors for genuine and progressive economic development.

(Even when Sec. Lorenzana and Pres. Duterte would no longer be in position, there would still be the rebellion because the call for the upliftment of the socio-economic status of the Filipinos would still not be realized. There are alternative ways in ending the armed struggle.)

Casilao stressed that in order to move on in the resumption of the peace talks, there should be no preconditions and the agreed signed documents should be honored. (davaotoday.com)