THE SENATE is holding a hearing on yet another corruption case this week, but there may be a reversal of fortune of sorts for previous Senate “visitor” and so-called “pork-barrel queen” Janet Lim Napoles — courtesy of no less than the Office of the Solicitor General (OSG).

Last Jan. 11, or just six months into the Duterte administration, the new crew at the OSG filed with the Court of Appeals a “manifestation in lieu of rejoinder” recommending the acquittal of Napoles for the crime of serious illegal detention of her second cousin, whistleblower Benhur Luy. Court documents obtained by PCIJ show that the appeals court received the manifestation on Jan. 20.

Luy is a state witness in the plunder cases against Napoles. On April 14, 2015, a Makati trial court convicted and sentenced Napoles to reclusion perpetua or 40 years in jail for forcibly detaining Luy first in a retreat house and then in her own home from December 2012 to March 2013.

Then President Benigno S. Aquino III meanwhile put up a P5-million bounty for the capture of Napoles’s brother and co-respondent in the case, Reynaldo ‘Jojo’ Lim.

Napoles is now serving her life sentence at the Correctional Institution for Women in Mandaluyong City, while her brother Jojo Lim remains at large.

Luy, who was employed in Napoles’s JLN Group of Companies, had testified that Napoles and Lim had detained him in two places to prevent him from revealing to authorities how she used bogus nongovernment organizations (NGOs) to get billions of pesos of pork-barrel funds from dozens of lawmakers, for fake projects. Napoles, however, has always maintained that she had not had him kidnapped.

Three former senators are now facing plunder charges for the alleged misuse of their pork-barrel funds using the fake NGOs of Napoles as beneficiaries, supposedly in exchange for fat kickbacks. A special audit report on the pork barrel disbursed from 2007 to 2009 that the Commission on Audit (COA) released in August 2013 also indicates that at least a hundred former and current members of the House of Representatives may have abused the system and received kickbacks from Napoles.

The discovery of the supposed collusion between Napoles and her bogus NGOs and many lawmakers to defraud the government of taxpayers’ money even led the Supreme Court in November 2013 to declare as unconstitutional the allocation of pork-barrel monies to legislators. 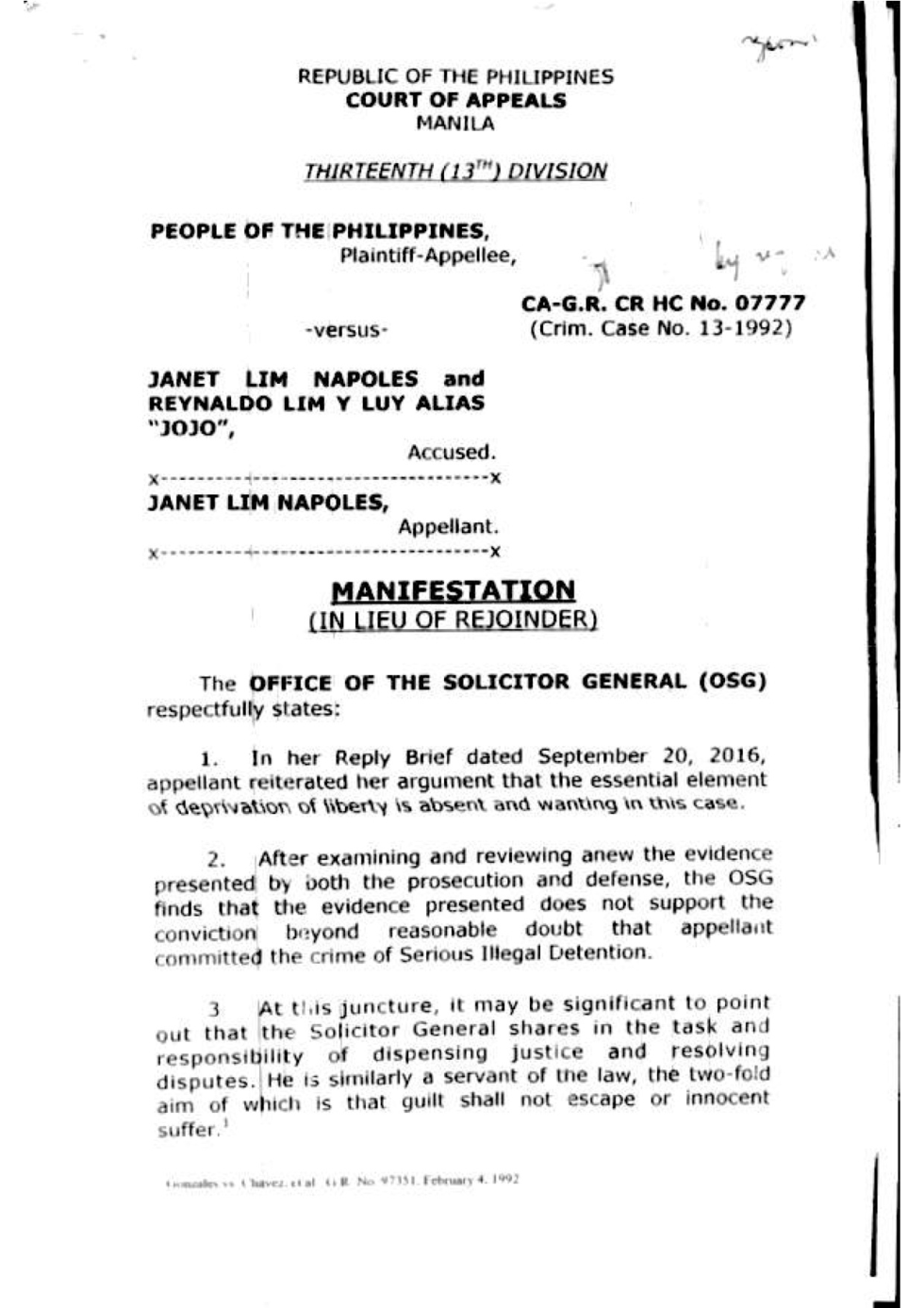 Five legal experts inside and outside government were queried separately by PCIJ on the OSG’s manifestation regarding Napoles’s illegal-detention case. They agreed that while it may not for now have a direct impact on the pork-barrel cases pending before the Sandiganbayan, questions might be raised about the integrity of Benhur Luy’s testimonies in the illegal detention case, and against Napoles.

The question of common concern to the five lawyers interviewed by PCIJ is this: Has the Duterte administration forged a modus vivendi with Janet Lim Napoles, and for what reasons and purposes?

The five lawyers are also unanimous about one thing: They say the OSG’s manifestation heralds a policy shift in how the Duterte administration wants to deal with Napoles, Luy, other state witnesses, and the lawmakers who had been indicted in the plunder cases involving the misuse of pork-barrel funds now pending trial before the Sandiganbayan.

Commented one of the lawyers: “The SolGen has taken positions before against the state, but often in minor cases, criminal and civil. This one is unusual because the SolGen has taken the side of the appellant, and against state witnesses in the pork barrel cases. This makes the SolGen manifestation significant. Most judges tend to favor the SolGen in cases like this one.”

Curiously, though, relevant senior officials in the Office of the Ombudsman, the Supreme Court, and the Office of the Executive Secretary expressed surprise when asked by PCIJ if they had previous knowledge about the OSG’s manifestation regarding Napoles’s illegal-detention case. All said they knew nothing about it and separately described the move of the OSG under Duterte as “dangerous,” “alarming,” and “shocking.”

Solicitor General Jose C. Calida, Assistant Solicitor General Henry S. Angeles, and Associate Solicitor Armand V. Morales had submitted the manifestation to the Court of Appeals. Calida’s signature does not appear in the document, but government lawyers say it is impossible for Calida not to know about the manifestation. Angeles is also currently serving as Calida’s chief of staff.

The OSG’s 10-page manifestation dated Jan. 11, 2017 was apparently triggered by a “reply brief” from Napoles dated Sept. 20, 2016 — or barely four months earlier — where “the appellant reiterated her argument that the essential element of deprivation of liberty is absent and wanting in this case.”
“After examining anew the evidence presented by both the prosecution and defense,” the manifestation said, “the OSG finds that the evidence presented does not support beyond reasonable doubt that the appellant committed the crime of serious illegal detention.”

It also explained why the Solicitor General was now disfavoring state witness Luy in the illegal detention case.

“At this juncture,” the OSG said in the manifestation, “it may be significant to point out that the Solicitor General shares in the task and responsibility of dispensing justice and resolving disputes. He is similarly a servant of the law, the two-fold aim of which is that guilt shall not escape or the innocent suffer (sic).”

It continued, “And while the OSG is, by law, constituted the law office of the Government whose specific powers and functions include that of representing the Republic and/or the people, it is not prevented from taking a position adverse to that of its clients, the People of the Philippines included, whenever it finds the contention of the adverse party or an accused tenable.”

The OSG also cited the Supreme Court’s ruling in one case, Orbos vs. CSC, noting that “this is not the first time that the Solicitor General has taken a position against his clients, like the CSC, the National Labor Relations Commission, and even the People of the Philippines… the Solicitor General has recommended the acquittal of the accused in the appealed criminal cases.”

Presiding Judge Elmo M. Alameda of the Makati Regional Trial Court Branch 150 had sentenced Napoles on April 14, 2015 to life in jail after a two-year trial. Napoles later raised her case to the 13th Division of the Court of Appeals soon and submitted her reply brief on September 20, 2016. In less than four months, the OSG – which receives on average of about 30,000 appeals on criminal cases a year — filed its “manifestation in lieu of rejoinder” recommending her acquittal.

Among other things, the OSG noted in its manifestation that on June 10, 2013 a special panel of prosecutors from the Department of Justice (DOJ) had recommended the dismissal of the Luy’s complaint. The panel, after two months of investigation, reportedly found that Luy had “voluntarily stayed” at the priests’ retreat house.

Judge Alameda, in his ruling on the case, had said the prosecution was able to establish that Napoles ordered Luy’s detention when she discovered that he had started to transact business with certain lawmakers using her business model.

According to Luy, Napoles and her brother Reynaldo had kept him at Bahay ni San Jose, a Catholic retreat house in Magallanes Village, Makati City, occupied by priests, and then at the Pacific Plaza Towers in Taguig City, where the Napoles family resides.

Luy’s rescue by agents of the National Bureau of Investigation Special Task Force (NBI-STF) from Napoles’s posh residence in Taguig in March 2013 paved the way for an investigation of the use of fake NGOs as beneficiaries of the pork-barrel funds of certain legislators.

The NBI and Luy filed a serious illegal detention case against Napoles and Lim in March 2013, but as the OSG pointed out in its recent manifestation, a DOJ panel dismissed it three months later. The NBI then filed a motion for reconsideration, which had the DOJ refiling on Aug. 13, 2013 the case of serious illegal detention against Napoles and Lim. This in turn prompted the issuance of warrants of arrest against the two.

But in its manifestation for Napoles’s acquittal in the serious illegal detention case filed by Benhur Luy, the OSG said, “The conduct and behavior of Benhur Luy during the period of his alleged detention belie the fact that he was detained or deprived of his liberty, contrary to the findings of the trial court in its April 14, 2015 decision.”

The OSG manifestation gave weight to the testimony of a priest identified as Fr. Peter Edward Lavin, who on Oct. 30, 2013 had said in court that Luy had never hinted or mentioned that he was being restrained or deprived of his liberty.

The OSG also cited the sworn statements of two security personnel of the condominium building of Napoles where Luy was rescued by NBI-STF agents that Luy had supposedly shouted at his brother that he had not been kidnapped.

As additional ground for Napoles’s acquittal, the OSG noted the statement of the NBI-STF team leader that Luy was not physically restrained when they came looking for him, and that Lim was not armed or accompanied by bodyguards during the rescue operation.

The OSG argued as well that the building’s CCTV footages lent incontrovertible support to the testimonies of these witnesses.

Interestingly, just weeks before Napoles’s lawyers filed her “reply brief” in September 2016, President Rodrigo Duterte himself had brought up the notorious businesswoman’s case at a press conference in Davao City.

In his hometown on Aug. 21, 2016, Duterte told the media there that while some lawmakers had been indicted in the Napoles-led pork-barrel scam in 2013, it was “not enough vindication for the Filipino people.”

“I would now raise again the Napoles issue,” media reports quoted the President as saying. “There are a lot of billions and billions of pesos lost. We have been able just only to put several lawmakers inside but only because the charge, the accusation is non-bailable.”

“Let us revisit the Napoles case,” Duterte said. “I have some revealing things to tell you about it. You just wait, but I will…if that is the only thing that I have to do until the end of my term, I will do it, for I shall have done a singular task, giving you the truth about the government.”

“The Napoles case should deserve a second look,” Duterte said, “for it also involves corruption and (Senator Leila) de Lima.”

For sure, the OSG is now giving the case more than a glance. Referring to the OSG’s manifestation, one of the legal experts queried by PCIJ remarked, “This is dangerous because of the indirect impact on (pending) pork cases, especially since Benhur talked because he was supposedly being detained illegally. This is not enough, of course, to set Napoles free, but doubt has been cast on the credibility of Benhur. Still, the illegal detention happened after Benhur acquired info on the pork transactions, so he can insist on his credibility about these matters. The problem is, public perception could turn against him because of this manifestation.”

A lawyer who had been part of the COA special audit team on the PDAF cases agreed with this view, noting, “Benhur gave a lot of documents kasi. Certainly, the indirect impact of this is to question his credibility, and that of the other witnesses. That might be the point of this manifestation.”
Still, the lawyer said, “A manifestation, from a lawyer’s point of view, does not always overturn or affect the court’s decision. This can be appealed to the (Supreme Court).”

Yet another lawyer – a government prosecutor – predicted that even with the manifestation, “(Napoles) stays in jail for the pork cases.”

The prosecutor added, “There was a time she wanted to tell all na. Maybe that is the modus vivendi, for her to tell all on politicians they (administration) don’t like.” — PCIJ, February 2017