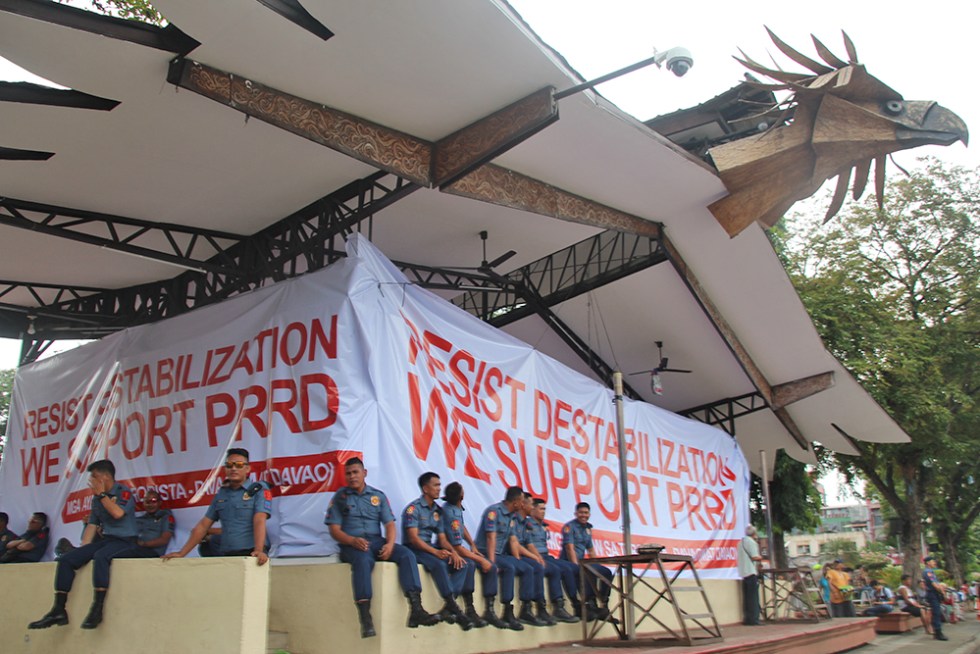 In this file photo taken on September 21, 2017, huge tarpaulins expressing support for President Rodrigo Duterte were hung at the Rizal Park stage in Davao City where protesters were supposed to gather for the commemoration of Martial Law. (Mara S. Genotiva/davaotoday.com)

“Power grabbers have made their point, made their presence felt, caught our attention, and we know who they are,” said Duterte-Carpio in a statement.

She, however, did not identify the individuals involved in the alleged destabilization plot but pointed out that such “threat of destabilization is as real as terrorism.”

The local chief executive was reacting to the groups’ criticisms hurdled against the President’s statement of establishing a revolutionary government amid threats of destabilizing the Duterte administration.

“All his destabilization claims are from intel reports and reliable sources from inside the offices of the people identified with the opposition,” she said.

The President ealier said he would set up a revolutionary government if destabilization plot would cause chaos.

“Pag ang destablization ninyo patagilid na at medyo magulo na (If your destabilization is about to fail and getting chaotic), I will not hesitate to declare a revolutionary government until the end of my term,” Duterte said on Friday, October 13.

A civil society group, Tindig Pilipinas, branded the President “paranoid and insecure” in reaction to his statement about setting up a revolutionary government. The group has launched a signature campaign against Duterte, urging him to sign a bank secrecy waiver.

Duterte-Carpio defended her father in the statement, saying he is not paranoid.

“How can he (be) insecure when he is the President? When you are the President, there is nothing that will make you feel insecure — not a survey results or a person like Trillanes or a power-hungry group called Tindig Pilipinas,” said Duterte-Carpio.

In two separate posts, Duterte-Carpio took to her Facebook account to express her tirades against opposition senators who continuously criticized her father. (davaotoday.com)