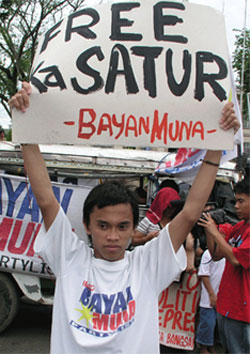 Release Him. A Davao City activist calls for the release of Bayan Muna congressman Satur Ocampo during a rally on Wednesday. Today, Ocampo filed a complaint before the UN special rapporteur on human rights, arguing against his arrest and detention. Among others, he complained that the skeletons dug up by the military and used against him have not been subjected to thorough forensic or DNA investigation. Also today, his lawyers prepared their oral arguments before the Supreme Court. Meanwhile, an Australian senator took the cudgels for Ocampo this week, denouncing in parliament the killings and Ocampo’s arrest. (davaotoday.com photo by Barry Ohaylan)