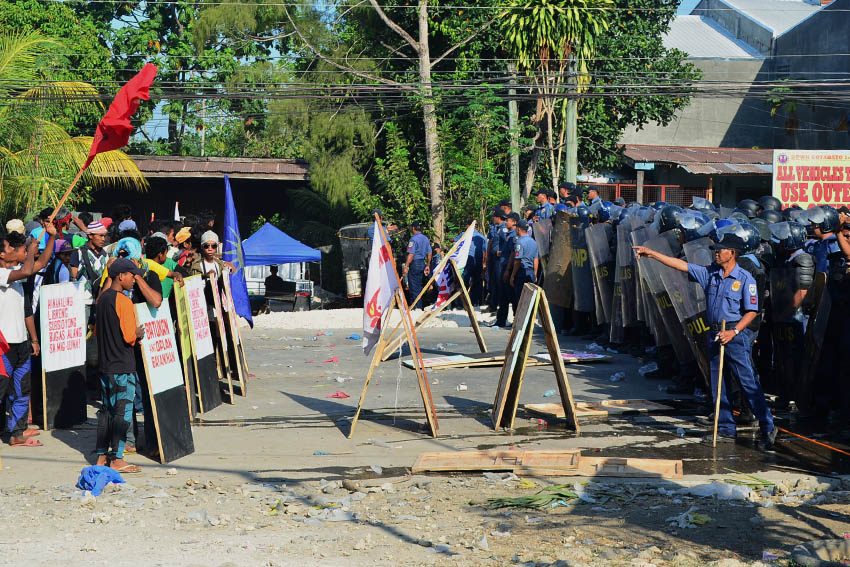 ON HOLD. After having their breakfast on Thursday morning (March 31) angry farmers hold their lines as police attempt to enter their barricade convincing individuals to go with them and be brought home to their respective
communities. (Earl O. Condeza/davaotoday.com)

DAVAO CITY — The Senate Committee on Justice and Human Rights headed by Senator Aquilino “Koko” Pimentel III will conduct a public hearing in Davao City on Thursday, April 7 to probe on the violent dispersal of the rally of farmers in Kidapawan City last Friday (April 1).

“We are holding the hearing in Davao City because it is one of the nearest places to the Kidapawan incident. Some of the invited resource speakers belong to the protesting farmers, who are too injured to travel all the way to Manila,” said Pimentel, the Chairman of the Committee on Justice and Human Rights.

An estimate of 5,000 farmers affected by the drought assembled along the Quezon Avenue in Kidapawan City to demand for 15,000 sacks of rice, farm subsidies, increase in crop prices and the pull out of military forces in their communities on Wednesday, March 30. On the third day, the protest was dispersed with at least three farmers dead and several others wounded on both sides of the protesters and police.

The hearing will be held at the University of Southeastern Philippines (USEP) in Davao City.

“In the Senate hearing, we will listen to all parties present,” said Cayetano. “But most importantly, we hope to get to the bottom of this issue and render justice to all the victims of this unnecessary use of violence.” (davaotoday.com)