Soldiers fighting in Marawi get gifts from Oro students 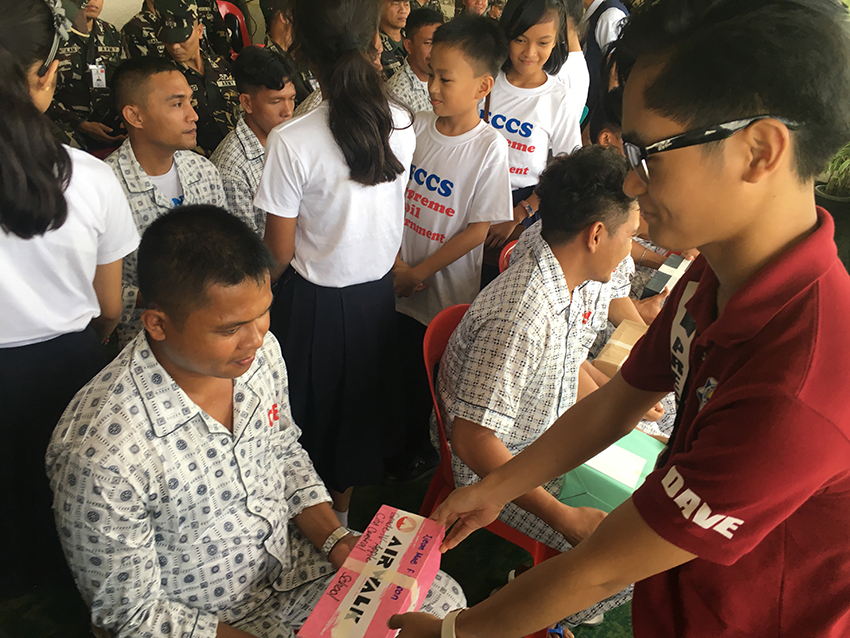 Students from elementary and secondary schools in Cagayan de Oro City take time out to give care packages​,​ or “victory boxes”​,​ to soldiers fighting in Marawi​ City​. The gifts, including love letters, ​a​re turned over by students to the Army’s 4th Infantry Division on July 21 and ​a​​​re transported to the conflict zone in Marawi. (Photo ​courtesy ​of Capt. Joe Patrick Martinez, Department of Public Affairs Office, 4ID)

CAGAYAN DE ORO CITY – Despite their youth, students from elementary and secondary schools here have understood the meaning of giving one’s life to his country as they took the initiative of giving care packages or “victory boxes” to soldiers fighting armed extremists in Marawi City.

A total of 3,000 boxed gifts were turned over by students to the Army’s 4th Infantry Division (4ID) for distribution to the soldiers in Marawi.

Capt. Joe Patrick Martinez, the 4ID spokesperson, said Tuesday the gift-giving was the idea of the students.

The gifts were turned over to the 4ID headquarters in Camp Evangelista, Barangay Patag, this city, on July 21.

He said the “victory boxes” were transported either by helicopter or military trucks to the conflict zone.

Wounded in action soldiers who
​we​re recuperating at the 4ID station hospital were also given the care packages.

In his message, John Gabriel Suralta, president of the federation of high school student governments in the city, said he always wanted to help the country in his own way since his elementary years.

“That is ​why ​I actively participated in many endeavors that will help our community such as this one, the giving of a very symbolic victory boxes especially made for our hero soldiers. This activity is our little way of letting our soldiers know that we care and support their quest and fight for a peaceful Philippines for which the youth will inherit in their future,” Suralta said.

He added: “As we give you these simple gifts that are specially sealed in boxes, on behalf of the elementary and high school students in Cagayan de Oro, we would like to say Thank You from the bottom of our hearts for standing in front of the enemies so as to ensure that we are all safe and protected. May God bless you always!”

Errol Fynn Chester Castrodes, Suralta’s counterpart in the elementary school level, said at his young age, he was taught by his parents and teachers that “there are people that we don’t know personally but ​to whom ​
we greatly owe.”

​”​During the time of adversities, extremism, terrorism, and rebellion, there is no one turn to but the country’s armed forces,​”​ Castrodes said, adding that what happened in Marawi has struck fear among the people living nearby as they hope that the violence will not spill over to other areas.

“However, I can say that with most determination and confidence that it will never happen for we have the most skilled and trained armies in [Southeast Asia],” he said.

“The freedom and liberty that I am enjoying today is the fruit of our soldiers’ sacrifices. Therefore, it is right and just for us to give each and everyone who served the AFP,” Castrodes added.

In his acceptance message to students, Major General Benjamin Madrigal, 4ID commander, said the giving of “victory boxes” ​to soldiers fighting in Marawi​ City​
“signifies our unity and your trust and support to your soldiers as we continue to fight for the preservation of our territorial integrity and the safety and freedom of our people and communities.”

Madrigal said it was heartwarming that despite their young age, the students have appreciated and understood the armed forces’ efforts in winning the peace in Mindanao.

“It is even more touching that you were able to think of giving us these victory boxes out of your meager allowances and that together with these boxes are your letters of support and encouragement for our soldiers,” he said.

Madrigal said this gesture will serve as the soldiers’ “inspiration and motivation to do our job even better. We are truly overwhelmed and grateful. Your act of kindness is more than enough and surely means the world to us.”(davaotoday.com)