State of the Youth Address: Educational system getting worse 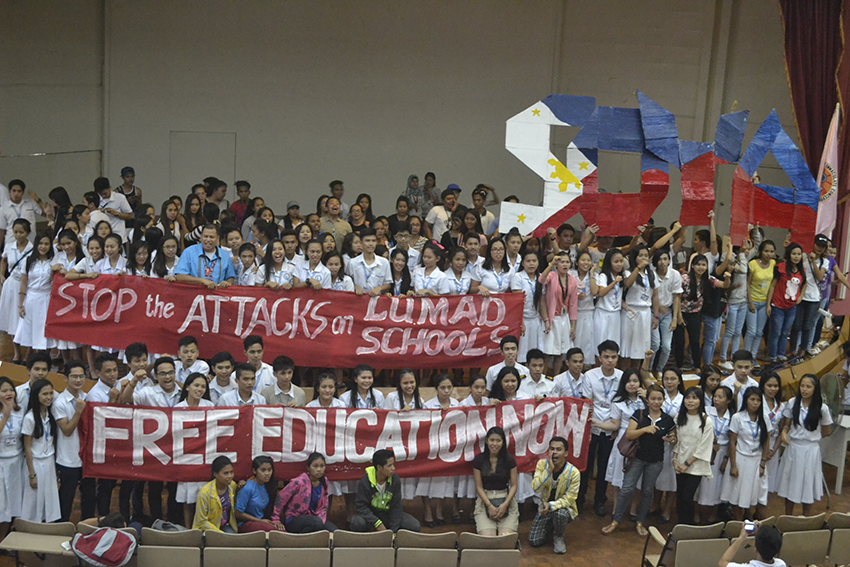 Two days before President Rodrigo Duterte’s second State of the Nation Address, hundreds of youth and students from different parts of Mindanao gather for the “State of the Youth Address” held Friday, July 21 at the University of Immaculate Concepcion Auditorium in Davao City. The participants called for free education and the stop of attacks against Lumad schools. (Mara S. Genotiva/davaotoday.com)

DAVAO CITY, Philippines – ​Progressive youth activists insisted that the youth are entitled to an array of rights, including the right to free and quality education.

This was raised by Angelynne Alapag, vice president of Anakbayan for Mindanao and who is also the University of the Philippines-Mindanao Chairperson of the Alyansa ng mga Aktibong Kabataan ng UP Mindanao.

​”​I want to stress our right to education as stated in our Constitution that says the State has the responsibility to protect and pursue the rights of all citizens in this country to a free and quality education at all levels, and will do every possible steps to make this accessible​,” she said.

Attended by more than a hundred students from different private schools and colleges in the city, including state colleges and universities, the State of the Youth Address (SOYA) was the local student activists’ ​version to President Duterte’s 2nd State of the Nation Address (SONA) today, July 24.

In her youth situation input, Alapag said “the heart of the crisis in education among the youth resulted from the neoliberal policies being pushed by the capitalist system in the 20thcentury.”

Citing Oxfam International findings, Alapag said ​”this same economic policy that has pursued economic inequality has made only eight of the wealthiest persons all over the world to amass wealth equal to the earnings of 3.6 billion poorest on earth.”

She added that the same policies being pursued by governments under the Millennium Development Goals (MDG) that supposedly aims for education for all in primary schools in 2015 was “over-shadowed by the staggering number of out of school with 58 million at the primary and 63 million in high school world-wide who were forced to stop schooling.”

​”​Even UNICEF was quoted as having stated that such millennium goals is not feasible and would need probably 200 more years under the current economic situation of the world before such goal is attained​,” she said​.

Alapag said ​that while the number of out of school youth continues to shoot up, “so has the number of unemployed among them increased.”​

Citing statistics by Trends Economic models between 1995 to 2015 where ​she said there were 73.3 million among the youth with age ranging between 15 to 24 years of age who were unemployed, she said that in the overall number of unemployed around the world, 36.7 percent comes from the youth sector.

Among the youth who were able to work, their compensation hardly enable them to survive on a daily basis, with a pittance of a compensation at $2 per day working as irregular laborers, or nine out of ten of them working in informal sector.

Alapag traced this situation to “the onset of neoliberalism during the time of Marcos’ labor export policy, which tied to the trade-off for loan packages from the International Monetary Fund, and continues to be enforced up to this time.”

“The Education Act of 1982 that pursued deregulation had set the precedent and took away the State’s control over education and gave tacit approval for private institutions to scale up tuition fee increases,” she said.

Moreover, schools begun using textbooks that had been approved by the IMF-World Bank as part of the deal, “and even the Philippine History taught in school had been dictated by foreign interests,” she added​.

The Higher Education Modernization Act of 1997 under President Ramos pursued budget cuts on education and ​student leaders described it
as worse.

​She said this was the time that the “socialized tuition schemes was enforced where a student need to prove before being granted the scholarship, that he/she is below the poverty line and impoverished and therefore deserving support from the State​”​.

Further reinforcing this policy was the Philippine Agenda for Educational Reform under President Joseph Estrada, which Alapag said ​placed the burden of finding every possible way to be “self-reliant” on the SUCs and limiting subsidies for poor students.

Moreover, she said President Gloria Macapagal-Arroyo ​”put premium on ​vocational courses to purportedly respond to the growing number of out-of-school youth and to cater to the demands of foreign investments needing semi-skilled laborers.”

This was also the time that SUCs began the shift into semi-privatization, burdening the poor Filipinos as privately-own educational institutions have tuition fees that are considered beyond the poor man’s capacity, she said.

She said ​that “what ails the country’s education system has been rooted in historical developments from one administration to another, thus, there had been no significant changes but that through the change of administration, the system even got worse.”​

​”​All of the above policies were further strengthened by the system of education under President Benigno Simeon Aquino that forced the K-12 into the system that is “foreign-oriented” and added too much burden on an already saddled poor Filipinos​,” she added​.

Meanwhile, the representative of the National Union of Students in the Philippines – Southern Mindanao has called on President ​​Duterte to stop State troops and their paramilitary Alamara from harassing Lumad schools.

The Lumad school had since ceased to operate after threats against the safety were getting serious. (davaotoday.com)