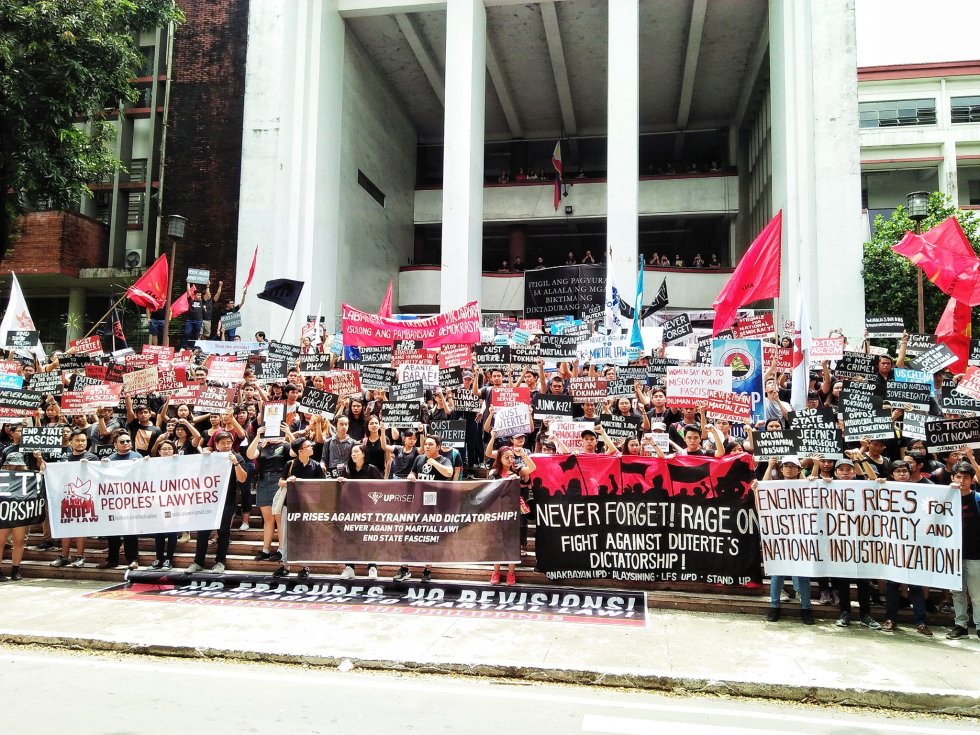 Student groups said the malicious tagging of schools is part of the fabricated plot used by the Duterte administration to vilify legal student and youth organizations and endagers the lives of students. (Photo from League of Filipino Students Facebook page)

DAVAO CITY, Philippines – The National Union of Students of the Philippines (NUSP) condemned the military’s tagging of 18 Metro Manila universities as ‘communist recruitment grounds’ for a supposed ouster plot against President Rodrigo Duterte. He said the military is trying to “create a climate of fear and insecurity.”

The NUSP said the government could not stand that Duterte is “unpopular among the youth for his deadly wars against the people.”

“The malicious tagging of schools is hence part of the fabricated plot used by the state to vilify students who fight against Duterte’s tyrannical rule and anti-people policies,” NUSP said.

“He fears university and college students who criticize the rottenness of his regime and are forging solidarity with the rest of the Filipino people to attain education, employment, agrarian reform, and human rights,” it added.

This week, the Armed Forces of the Philippines (AFP) bared the 18 schools where the Communist Party of the Philippines (CPP) is purportedly recruiting students. According to the military, film showing activities on dark days of martial law are being used to incite students to rebel against the government by projecting President Duterte as a new dictator.

“They do not want students to discuss inflation and skyrocketing prices, contractualization, Martial Law in Mindanao, the deadly war on drugs, and other pressing issues precisely because they aim to prolong the suffering of the people brought about by their policies and programs,” the group said.

NUSP added, this fabricated list will be used to justify the crackdown of the state on schools.

In separate statements, universities tagged by military denied participating in the alleged “Red October” plot to destabilize the government.

Mark Anthony Abenir, director of the UST Simbahayan Community Development Office said in a statement tweeted by the school’s publication The Varsitarian, that UST has been in support of different issues of marginalized sectors like the Lumad. He also sees nothing wrong with the university advocating against Martial Law.

“I do not understand why they are red-tagging the University for standing up for human rights, standing up against the return of any form of dictatorial rule,” Abenir said.

UST Secretary General Fr. Jesus Miranda, O.P also questioned the allegations of military, saying that they have to prove it first.

While, University of Makati, in a statement, said it “has no knowledge of any student activity linked to what the AFP claims as recruitment efforts of the Communist Party of the Philippines.”

“While we protect the rights of our students to free speech and assembly, we also strongly adhere to the principles of democracy as enshrined in our Constitution,” it said.