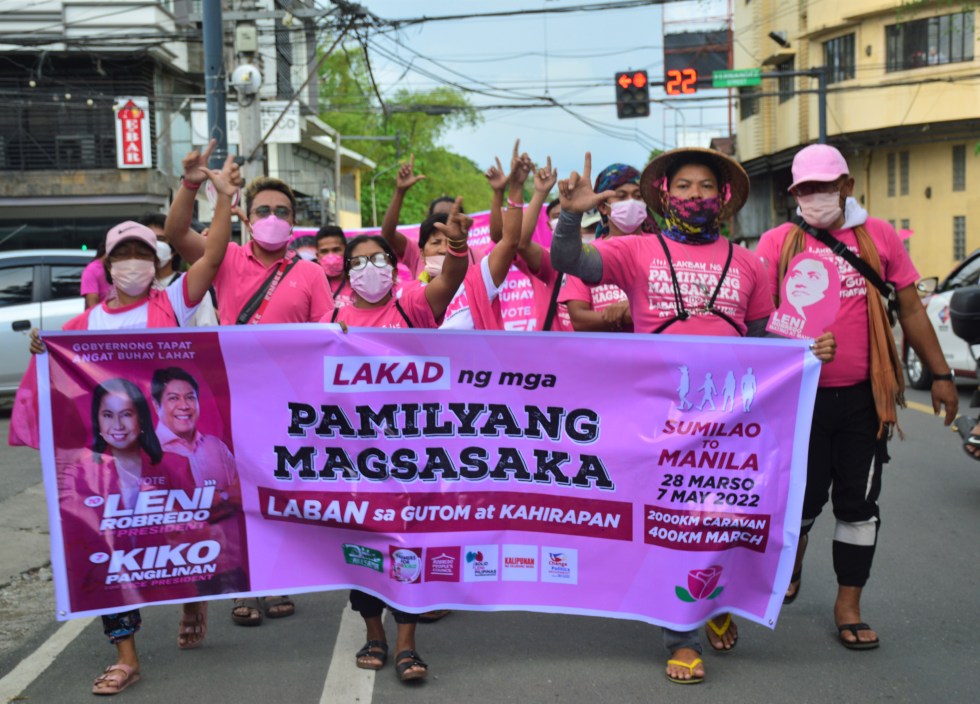 Farmers from Sumilao, Bukidnon have began a combination of caravan and march from Bukidnon to Manila to campaign for the candidacies of Vice Pres. Maria Leonor Robredo and Sen. Francis Pangilinan who are running for president and vice president, respectively, as their way of expressing gratitude to Robredo who had helped them in their fight to reclaim their ancestral domain. Photo shows the farmers marching upon their arrival in Cagayan de Oro Sunday, April 3. (Jigger Jerusalem/davaotoday.com)

CAGAYAN DE ORO CITY, Philippines — They walked all the way from their farms in Bukidnon to Metro Manila in 2007 to fight for their claim for their ancestral land.

Fifteen years later, the Sumilao farmers, who made headlines for their march, are marching once again. This time to support the lawyer who helped them and is now running for the presidency.

The peasants won the legal battle and eventually got their 144-hectare land back with the help from legal professionals who volunteered their time and resources for the farmers.

One of those who had extended legal assistance to the Sumilao farmers during those years of struggle was Vice President Maria Leonor “Leni” Robredo, who was then a practicing lawyer at the time.

Robredo is gunning for the presidency with Sen. Francis “Kiko” Pangilinan as her running mate in the May 9 local and national elections.

As a way to repay Robredo’s help to them, the Sumilao farmers have taken the initiative of going back to Manila, through caravan and march, with Maramag town in Bukidnon as the starting line on March 28 and to end in Luzon May 7.

From Cagayan de Oro, the contingent will traverse the cities of Iligan and Pagadian before boarding a ferry to Dumaguete and making the rounds in the Negros islands and other areas in the Visayas. They are expected to reach Luzon April 18.

Noland Peñas, one of the Sumilao farmers whose father Rene was among the 2007 marchers, said that once they arrive at Gumaca, Quezon province on April 20, they will walk all the way to the Luneta Park’s kilometer zero marker.

The group’s plan is to do a 400-kilometer march and a 2,000-kilometer caravan during their journey.

During a short program held at the Gaston Park in Cagayan de Oro to welcome them Sunday afternoon, April 3, Peñas said their group is composed of 10 farmers from Sumilao and seven representatives from other peasant organizations.

He said the numbers 10 and seven signify Robredo’s and Pangilinan’s respective numbers on the ballot.

Its sum, 17, also symbolizes the 17th president of the country, which they believe should be Robredo.

“We want to show the ‘resibo’ (receipt or proof) of what Leni and Kiko have already done for us farmers in Sumilao,” Peñas said, adding that there also other peasants who benefited from the government interventions implemented by the Office of the Vice President.

The Sumilao farmers’ success story, he said, will show the people the impact of good governance.

Peñas said they will not just march but will also campaign for the Robredo-Pangilinan tandem as well.

“This caravan will prove that campaigning is not limited to politicians, and we are the living witness that democracy in the Philippines is alive and thriving, and that this is not just the time for politicians,” he added.

For Miraflor Rojo, a member of the Sumilao group, campaigning for Robredo is their way of expressing their gratitude to the vice president.

“We campaigned for her in 2016. We also conducted a caravan when she ran for vice president. And once again we are helping her now that she is running for president,” Rojo added.

Archbishop Jose Cabantan, the head of the archdiocese of Cagayan de Oro, said of the Sumilao farmers: “Our dream for a good governance is not just for our leaders but also the people through empowerment and involvement.”