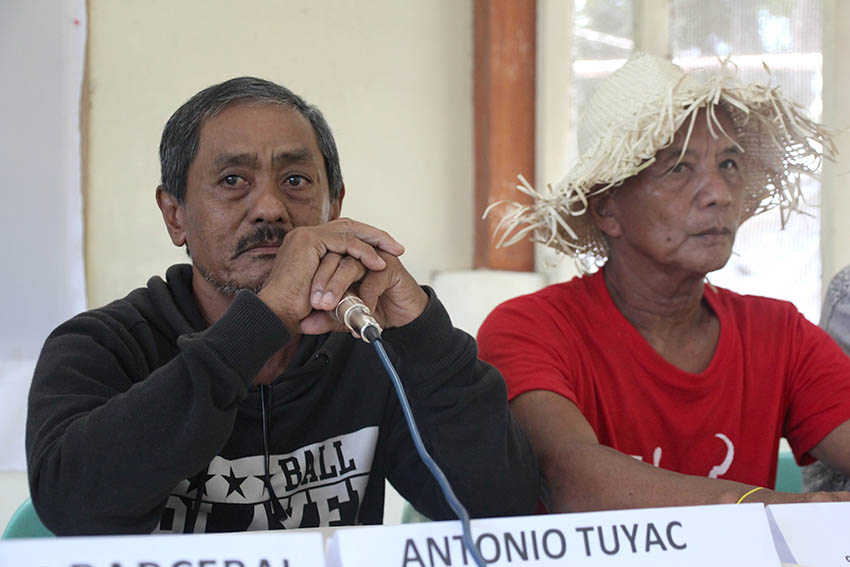 DAVAO CITY, Philippines —- Agrarian reform beneficiaries in Tagum City, Davao del Norte province ​expressed ​fear that it will now be easy for a banana company to evict them from the disputed land after the powerful Commission on Appointments rejected the appointment of Rafael Mariano as the secretary of the Department of Agrarian Reform.

Members of the Madaum Agrarian Reform Beneficiaries Association Inc. were installed in the 145-hectare disputed land in May, six years after they were ousted from the land.

“Nagpabilin among kabalaka pananglit sudlon mi sa Lapanday, unya kami mapagawas. Kinsa may mo-install namo balik kung wala na si Ka Paeng? (We worry now that without Ka Paeng, who will install us back in our land if Lapanday forces us to get out of the land?),” Antonio Tuyac, spokesperson of the Marbai told reporters here on Thursday.

Tuyac said there have been threats from suspected guards of the LFC to enter their ​area.

Farmer beneficiaries are taking turns every night and day in securing the perimeter ​of the ​San Isidro farm area, he said.

Tuyac warned that ARBs will not give up the land which they acquired after Mariano issued a Writ of Installation in favor of them.

“Kung mosulod gyud ang Lapanday, pakamatyan namo nang lugara (If they will force to enter our area, we will die for the land),” he said.

Mariano’s appointment was denied on Wednesday by the CA.

During the deliberation, a joint resolution by the Regional Peace and Order Council of Southern Mindanao in May cited Mariano as being involved in the New People’s Army raid, which Mariano denied.

Officials of the LFC present during the CA hearing said Mariano is “unfit” to hold the position as DAR chief.

After the installation of the Marbai farmers in May, the LFC also sued Mariano and DAR Undersecretary before the Ombudsman with violation of Section 3, Paragraph E of Republic Act 3019 or the Anti-Graft and Corrupt Practices Act, grave misconduct and grave abuse of authority.

LFC counsel, Atty. Noel Oliver Punzalan accused the two officials of “giving unwarranted benefit, advantage or preference” to the ARBs under Marbai after DAR issued a cease and desist order (CDO) prohibiting the company from evicting the ARBs who had entered the San Isidro (Sanid) farm in San Isidro village last Dec. 9, 2016.

There are 159 ARBs under the Marbai, which broke away from Hijo Employees Agrarian Reform Beneficiaries Cooperative – 1 (Hearbco-1) in 2010.

Lapanday Foods Corporation, which opposes the “Writ of Installation” issued by DAR in favor of the ARBs under Marbai, argues that the Hearbco-1 still has “an existing and valid contract with LFC to manage the portions of the plantation.”

DAR filed an Urgent Motions to Quash the Alias Writ of Execution and for the Immediate Referral to the DAR stating that the lower court has no business to determine whether there is an agrarian dispute.

DAR said “the Performance of the Banana Sales and Marketing Agreement (BSMA) results to the eviction of the Agrarian Reform Beneficiaries from the San Isidro farm area. The writ conflicts with the cease and desist order and the Office of the Provincial Adjudicator (PARAD) action. There lies the agrarian dispute.”

It said the court has the duty to refer the matter to DAR.

Meanwhile, the RTC Branch 14 denied DAR’s Urgent Motions to Quash Alias Writ and Immediate Referral to the DAR saying it has “no business to interfere in the instant case.” The court also described DAR’s appearance is “obviously late and beyond the period prescribed by the rules.” (davaotoday.com)