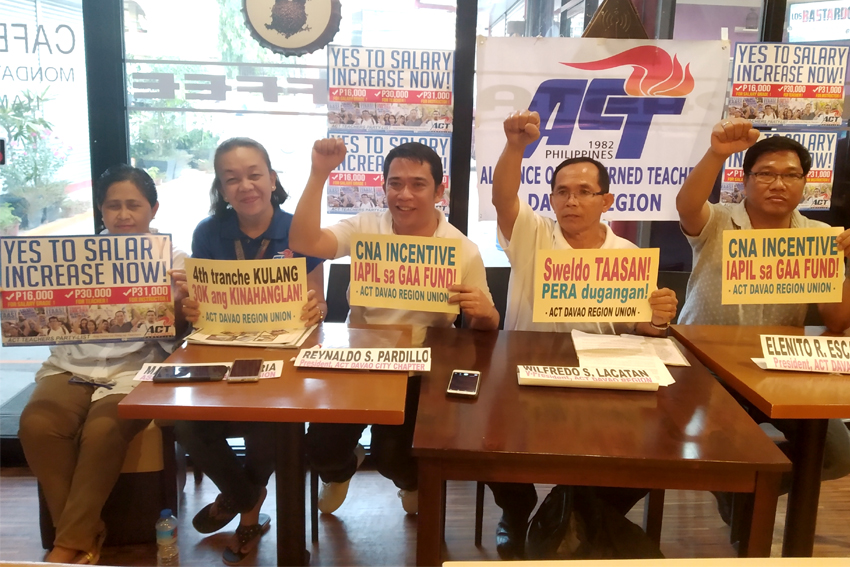 Alliance of Concerned Teachers Union in Davao Region President Elenito Escalante said that the fourth tranche of the salary adjustment coming next month is “not enough” as they are deeply affected by the price increase of basic commodities brought about by the Tax Reform for Acceleration and Inclusion (TRAIN) Law.

“Educators who belong to Teacher I, II, and III ranks will receive 2.8% to 4.2% salary increases under the 4th tranche of pay hike, which are way below the 5.2% inflation rate in 2018,” said Escalante in a statement read during a press conference on Friday, January 25.

The group lamented that while teachers will receive a meager salary increase, top officials of the government who has six-figure salaries will receive as much as additional P100,000.

“The 4th tranche only amounts to an increase of P575 for Teacher I, P789 for Teacher II, and P1,008 for Teacher III, and it is us who compose around 90% of the workforce in public basic education. Meanwhile, the President will receive an additional P101,656 and DBM Sec. ‘Joke-no’ may receive as much as P71,601 more. It is impossible to miss the injustice here,” Escalante added.

The group noted that President Duterte will receive 34% increase on his monthly salary.

Earlier this month, the head of the Department of Budget and Management (DBM) Secretary Benjamin Diokno said the agency is expected to release the fourth tranche of salary increase for state workers under the Salary Standardization Law (SSL) once the General Appropriations Act (GAA) of 2019 is signed by Congress.

The teacher group said they are firm in their call for a P30,000 salary for Teacher I, P31,000 for Instructor I in Sate Universities and Colleges, and P16,000 for salary grade 1 employees.

Only a P10,000 increase from the current P20,000 monthly salary for Teacher I, said Escalante. An increase, for him, is well deserved by overworked public school teachers.

They also urged President Duterte to immediately approve additional P3,000 increase in their Personnel Economic Relief Allowance (PERA). As it has not been adjusted since 2009 to cope with the current inflation.

“President Duterte himself said he will increase salaries of teachers next. We now urge our fellow legislators, as they deliberate at the bicameral conference for the national budget, to ensure the inclusion of the substantial salary increase for teachers and other government employees, and rechannel the P75 billion pork barrel to fund the substantial salary increase and benefits of our government workers,” Rep. Tinio said in a statement on Monday.

Although “partial victories” were won, according to Rep. Castro there is still no substantial increase in the sector’s salaries in 2019 national budget.

The lawmaker mentioned that the lower house included a provision for the P500 annual medical examination fund for each public school teacher as mandated by the Magna Carta for Public School Teachers while the Senate included the P2.93 billion budget for the partial implementation of Cycle 7A of the National Budget Circular (NBC) 461 for 107 out of 144 State Universities and Colleges.

“In the current draft of the National budget, teachers can only expect an increase in their salaries because of the 4th tranche of the Salary Standardization Law (SSL), which only amounts to an increase of P575 for Teacher I. The minimal increase has already been eroded by the rising prices of basic goods as the second tranche of the fuel excise tax due to the TRAIN Law is implemented,” Tinio added. (davaotoday.com)