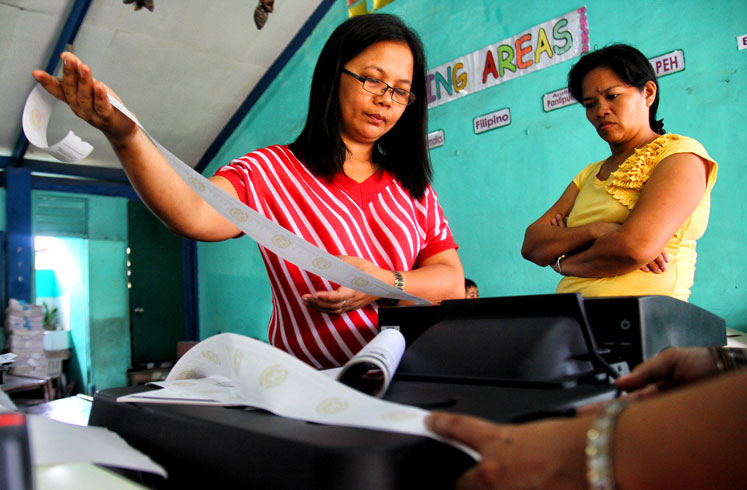 A Board of Election Inspector in one of the clustered precincts in Davao City’s Cesario Villa Abrille Elementary School tests the PCOS machine during the Final Testing and Sealing Monday. (davaotoday.com photo by Ace R. Morandante)

DAVAO CITY, Philippines — Gone are the days when teachers — serving as Board of Election Inspectors (BEIs) — wield power in polling places as technicians and supervisors now play greater roles in this “era” of automated elections.

In the polling places and clustered precincts visited by davaotoday.com around the three Congressional districts here during the final testing and sealing (FTS) last Monday, BEIs were observed to have followed the procedure, step-by-step, in handling the precinct count optical scan (PCOS) machines.  But they had to call the attention, if not ask for the assistance, of the PCOS technicians assigned in the precincts.

In one of the clustered precincts in Piedad Central Elementary School (PCES) in Crossing Bayabas, Toril, for example, the back-up battery of the machine went dead.

“We hooked the battery because it was instructed that it should be done for 15 minutes.  But the PCOS turned on only for a while and went dead,” said Alona Bagaslao, the BEI chairperson of clustered precinct 910.

They had to repeat the procedure for three times, to no avail.  That’s why, they called the technician.

Grace Perez, a poll clerk, was grateful for the technicians’ presence.  She said their number was also increased, unlike in 2010 when there was only one technician assigned for the 19 PCOS machines.

But the ratio of the technician to the PCOS machine varies.

In Buhangin Central Elementary School (BCES) in the Second Congressional District, four technicians were assigned to attend the 20 PCOS machines.

Deomil Abrigana, a technician, told davaotoday.com, other polling places were assigned with one technician for one or two PCOS machines.  “It really depends on the size (of the polling place),” he said.

Abrigana, a graduate of BSIT, served as a supervisor in 2010, in Matanao town, Davao del Sur.

He also shared that when problems occur, the technician would refer it to the supervisor and then the latter refers it to the National Support Center (NSC).

“But I’m wondering why the NSC hasn’t replied yet to our queries.  Last elections, they immediately answer to troubleshoot problems,” he said.

Abrigana said they’ve been waiting for the NSC’s reply since early morning, yet by noon, they still got none.

Lawyer Aimee Ferolino-Ampoloquio, the Commission on Elections (Comelec) officer for the First Congressional District, said the PCOS technicians are only expected to perform basic troubleshooting.

“If the problem is software malfunction, (they can) refer it (to the PCOS in-charge),” she said.  She added they have no plans to increase the ratio of technicians to PCOS machine.

BEIs and technicians, she said, were trained to be self-reliant as Comelec personnel are just “on call” and could not be expected to be in the polling places all the time, as they are only few in numbers compared to the number of precinct clusters and polling centers.

But as the Comelec depends on the technicians, some of the latter expressed they have not received any allowances yet.

In 2010, Abrigana shared, they had food, transportation and communications allowances during the FTS.  But now that only a load allowance was promised by the Comelec, they haven’t even received any yet.  The technicians’ rate also dropped from about PHP 7,000 to about PHP 4,000.

BEIs also reported that the honorarium promised to them by the Comelec was a month late.

Poll watchdog Kontra Daya said they were alarmed with the number of problems they monitored during the FTS.

“We regret that the poor outcome of the FTS would reflect the outcome of the actual polls, which could lead to election failure,” said Aya Ragrario, University of the Philippines professor and convener of Kontra Daya.

She cited cases of PCOS machines that unexpectedly shut down or accepted wrongly-shaded ballots, memory cards that are undetected and dysfunctional PCOS keys, among others.

In BCES’s clustered precinct 493, davaotoday.com learned that ballots that were marked with x or checked were still accepted by the machines.  Even ballots that were shaded with 15 senatorial bets instead of 12 were also accepted, causing the BEIs to worry.

Should this is the case, a manual counting is necessary to verify if the ballots deemed as “invalid” were still counted.

Kontra Daya reported a case in Kabacan Elementary School where the manual count and that of PCOS did not match.  The latter’s count lacked one vote each for the Senators and Councilors.  It added that in BCES, a machine failed to function which forced the BEI to manual count.  There’s also a case when the serial number of PCOS machine and its battery did not match, like in Datu Piang Elementary School.

Youth group Anakbayan also expressed alarm with the “widespread errors and defects” during Monday’s FTS, saying it only showed that the Automated Election System (AES) “is “highly vulnerable to tampering and manipulation.”

“The level of negligence and incompetence by the Comelec is beyond belief.  This can no longer be dismissed as human error,” said Vencer Crisostomo, national chairperson of Anakbayan.

He cited the lack of proper equipment from the Comelec which forced many BEIs to use packing tapes instead of a special tape in sealing the PCOS machines to supposedly protect them from tampering.  He also said the FTS did not include the process of testing the transmission of votes from the PCOS machines to the canvassing machines in the municipal and national levels.

Krista Melgarejo, convener of Kontra Daya, said they have long doubted the AES.

“We still have outstanding issues with the availability of the source code to be used and the security of the transmission.  Now, we have other things to worry about,” she said as she called the Comelec as “much unprepared” yet “very eager” to pursue the AES that could “threaten the sanctity of the people’s votes.”

Gabriela Women’s Party said the irregularities monitored on Monday and the lack of a source code review before the actual conduct of elections puts the credibility of the May 13 elections “under a cloud of doubt.”

Meanwhile, Kontra Daya urged the Comelec to work on its contingency plans if ever the AES fails as it feared that worse could happen in the rural and remote areas, especially in places struck by typhoon Pablo.

GWP also asked the voters to be vigilant as “discredited and unreliable election results” could disenfranchise women and voters, especially from the poor and marginalized sectors.  “More than fast elections, we need credible elections,” Ilagan said.

The Kontra Daya is also preparing to ask for United Nation’s help in order insure that the AES “would not compromise the voters’ rights.”  (With reports from John Rizle L. Saligumba & Marilou Aguirre-Tuburan/davaotoday.com)