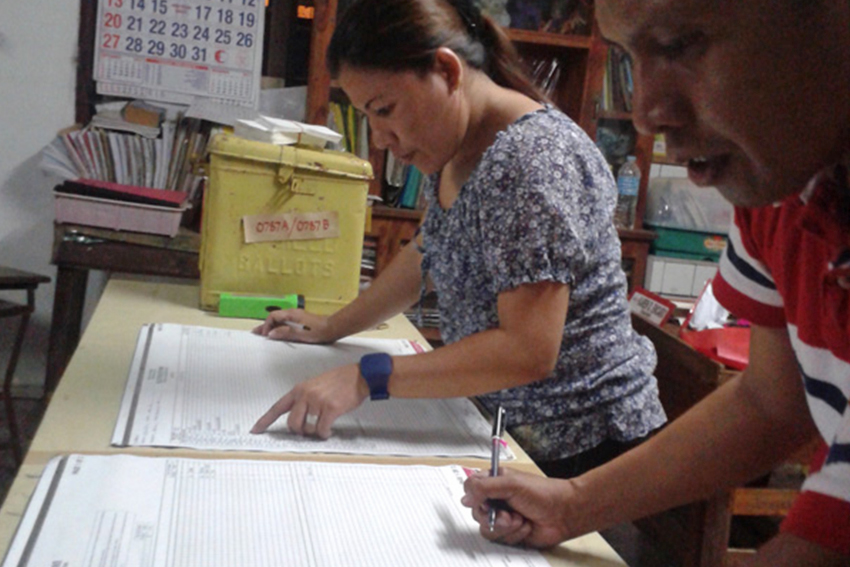 CANVASSING. Teachers acting as board of election tellers do manual canvassing in totaling the votes. (davaotoday.com file photo)

DAVAO CITY, Philippines – The Alliance of Concerned Teachers slammed the Department of Education and the Commission on Elections (COMELEC) for imposing 5 percent withholding tax on the electoral honorarium and travel allowance.

Teachers serving as electoral board received yesterday an advisory from the COMELEC telling them to bring P25 when they claim half of the travel allowance on May 12 and 13 as withholding tax for the P500 initial travel allowance that will be released to them before the polls.

“Our demand is for the election honorarium and travel allowance to be received in full by those who will render election service. They should spare our teachers already exhausted from election service from additional expenses and extra effort just to claim some P300 to P350 worth of tax refund,” said Raymond Basilio, ACT Philippines Secretary-General.

Basilio questioned the unreasonable ruling of the Bureau of Internal Revenue (BIR) and the late response of the DepEd and COMELEC.

“I believe that you are aware that the BIR has already issued a ruling… The TRAIN Law specifies that those with annual income below P250,000 will be tax exempt. Computations were made; it will range from P300 to P350. In two weeks’ time, that [amount] will be returned once our teacher-volunteers submit and have their certification of salary grade verified,” DepEd Secretary Leonor Magtolis Briones said in a statement.
Earlier, ACT representatives called for the BIR to overturn its decision on the 5% withholding tax of honoraria and travel allowance.

“Teachers deserve to receive the full amount of the honorarium after undertaking their high risk job as poll workers, We don’t see any reason for BIR to deprive the members of the BET of their full compensation as majority of them are public school teachers earning below P250,000 threshhold that should already be exempt from income tax,” ACT Representative Antonio Tinio said.

He added that majority of teachers and other election workers receive bonuses less than P90,000, the ceiling of tax-free bonuses.

The travel allowance is not an income therefore, it should not be taxed. It is a form of reimbursement for the expenses incurred by the poll workers in the performance of their official duties such as bringing the election paraphernalia to precincts and taking them back to the local COMELEC offices, Representative France Castro said.

Deped Secretary Briones on April 23 appealed to the COMELEC for higher honoraria and tax exemption for teachers serving in the upcoming Barangay and SK elections. (davaotoday.com)