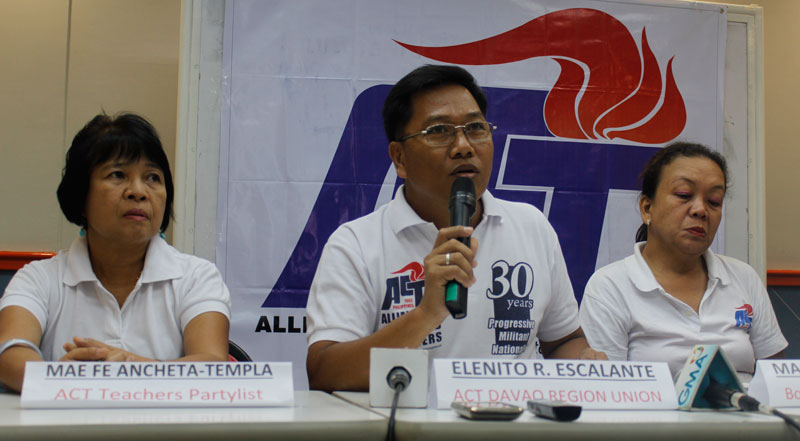 ANGRY TEACHERS. In a press conference Wednesday, teachers in Davao City demand for a public apology from Comelec officer Aimee Ferolino-Ampoloquio after issuing a statement that BEIs are “either forgetful or just plain stupid.” (davaotoday.com photo by Marilou Aguirre-Tuburan)

This was how the teachers described the comment, if not tongue-lashing, they received from the Commission on Elections (Comelec) official, lawyer Aimee Ferolino-Ampoloquio.
“Either limtanon kaayo or bugok jud sila (Either they are forgetful or just plain stupid),” was how Ferolino-Ampoloquio, Comelec officer for the First Congressional District, described the Board of Election Inspectors (BEIs) to the reporters last Monday, a little after the final testing and sealing (FTS) concluded.

“I’ve been in government service for 25 years now, and I have served in the elections even before I became a teacher.  And now she’s telling that I am stupid?” said Marydel Enanoria, a teacher from the Nograles National High School and serving as a BEI for the May 2013 elections.

Enanoria, like the rest of the teachers, can’t simply ignore Ampoloquio’s statement.  She said she was hurt and noted that for over two decades of her experience, any failure of election was never attributed to the teachers.

She also said that had it been the case, the Comelec could have disqualified her a long time.  “But that didn’t happen.  Because I have done my best and I know my responsibilities during election time,” she said.

She said the FTS could have been finished earlier but she had to wait for three hours because there was no paper and plastic seals available.  “I can’t just leave the PCOS (precinct count optical scan) machine unsealed, otherwise, I will be dismissed or be filed with a case,” she said.

The Comelec advised her to use a scotch tape to seal the ballot box instead, a move that greatly counters the briefing that that they can’t do it without the paper seal with the corresponding serial number.  “I was really afraid to do that,” she said.

Meanwhile, Elenito Escalante, president of the Alliance of Concerned Teachers of the Philippines Davao Region Union, said this is the first time they heard such a demeaning statement from a fellow government employee who’s just been transferred from Davao del Sur.

He also debunked Ampoloquio’s claim that BEIs were given enough training.

“Kanus-a ba nahimong igo ang usa o duha ka adlaw nga training nga ginahatag kausa ra sulod sa tulo ka tuig?,” he said, adding that they deemed it necessary for at least four days to a week of training in order for the BEIs to have enough time and to internalize the process of the Automated Election System (AES).

“We deserve an apology from Atty. Ampoloquio.  She has to explain to the public why she made that statement,” said Escalante.

Atillo said that many teachers don’t want to serve in the elections anymore, if not with the Omnibus Election Code that “forces” them to man the precincts.

He said the statement made by Ampoloquio could discourage voters as the credibility of the teachers had been questioned by the Comelec official herself.

She said since 2010, problems have surrounded the AES, thus, it’s unfair to single out BEIs, mostly teachers, for the failure of the FTS last Monday.

In this story, poll watchdog Kontra Daya and davaotoday.com have gathered observations regarding the glitches and other inaccuracies in the different polling centers around the three congressional districts.

Ancheta-Templa said the Comelec should address the problems on defective PCOS machines, the apparent lack of technicians to assist the BEIs and that there must be enough experts to assist the technicians, among others, instead of attacking the capacity and personality of the teachers.

The teachers are planning to conduct a protest outside the Comelec Thursday.  They have not reached a decision yet to boycott the election.

“The pronouncement has angered me as it degrades our professions.  Our public school teachers are dedicated even if they receive little compensation and risk their lives as BEIs.  The Comelec should recognize that this is the highest form of service, and should not belittle us, just like that,” said Jose de Lara, president of Davao City Public School Teachers Association.  (With reports from Jayboy A. Urbina & John Rizle L. Saligumba/davaotoday.com)