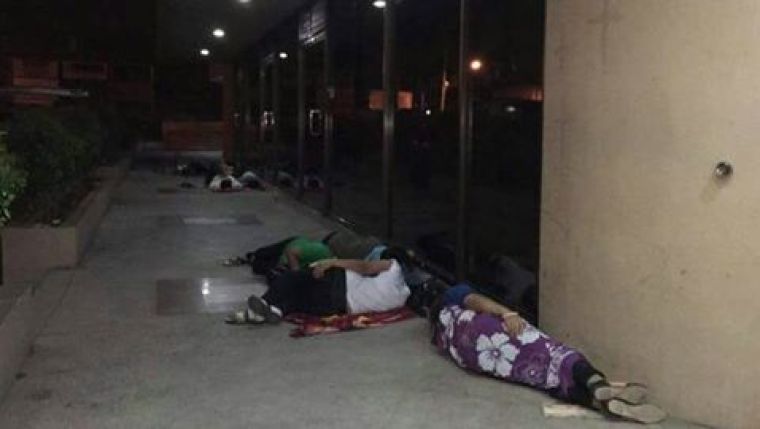 SLEEP OVER. Seen in this photo are professional teachers sleeping outside the building of Professional Regulation Commission in R. Castillo St., Davao City. (Photo by Ener Judit)

DAVAO CITY—Private and public school teachers in Davao region have one appeal to incoming President Rodrigo Duterte: fix the “extremely poor” delivery of services of the Professional Regulation Commission (PRC) in Davao City.

PRC’s regional office located in R. Castillo St. in Davao drew heavy criticisms from among teachers after a Facebook post was doing a round online on Sunday, May 29. The regulatory agency is attached to the office of the President of the Philippines.

The social media post was created by Davao del Norte public school Principal Ener M. Judit who described the ordeal of the teachers transacting at the PRC.   In his Facebook post which was shared 728 time as of Sunday evening, Judit called the attention of the agency because of its extremely poor services.

“Ang mga taong nakahiga sa labas ng building na ito ay HINDI mga PALABOY, lalong hindi mga “taong grasa”, mga professionals yan lahat na natutulog sa labas ng PRC DAVAO. Pag araw naman, kung hindi ka matatag sa ilang oras na tayuan at tinding sikat ng araw, mahe head stroke ka talaga (The people sleeping outside of this building are not an outcast, and definitely they are not a homeless rugged beggar but professionals who are sleeping outside the PRC in Davao. In daytime, if you couldn’t withstand the scorching heat of the sun while queuing, you will really suffer a head stroke),” Judit said in his post, referring to a photo where teachers seen sleeping outside the PRC building.

“We appeal to Duterte that he will fix the delivery of government services especially in PRC Davao. The situation remains the same and no President tries to lift a finger to fix this kind of problem that besets the teachers,” Judit told Davao Today in an interview.

“The situation is so miserable that really insults the dignity of our professions,” Judit added. He said that aside from teachers, there are also other professionals who raised the issue with the regulatory agency.

“Actually aside from teachers there are other professionals who suffered the same agony. It just that majority are teachers who transacted with PRC,” he stressed.   He also described the agency’s guard on duty as overly authoritative especially when they were approached to answer some questions from the teachers or other professionals.

“This is how difficult and degrading to get a priority number just to renew your license in PRC Davao,” he said, adding that most the professionals who slept outside the PRC’s building came from other cities and provinces.

He urged the agency’s officials to fix the present system by making a new scheme in giving a priority number.

“On getting a priority number, please make a new system. With these scenarios happening everyday, how non-sense it is not to create a scheme to orderly give priority number without degrading the clients.”

“If it’s true that change is coming, I Duterte na yan,” he added.

“I suggested to them to have an online application to fast track the scheduling of the documents especially for those teachers who came from far-flung areas. It is so disappointing to know you will queue for a long hours and at the end of the day, you will be sent home empty handed because there’s no longer priority number,” she said.

Grace Sorrosa, another public school teacher in Tagum City, believes that an online system will remedy the problem. “To lessen the inconvenience, PRC should have an online system that features an online appointment that is accessible to the public. By having this, teachers will only appear to the agency to claim their documents. PRC should consider such proposal for the convenience of everyone.” (davaotoday.com)