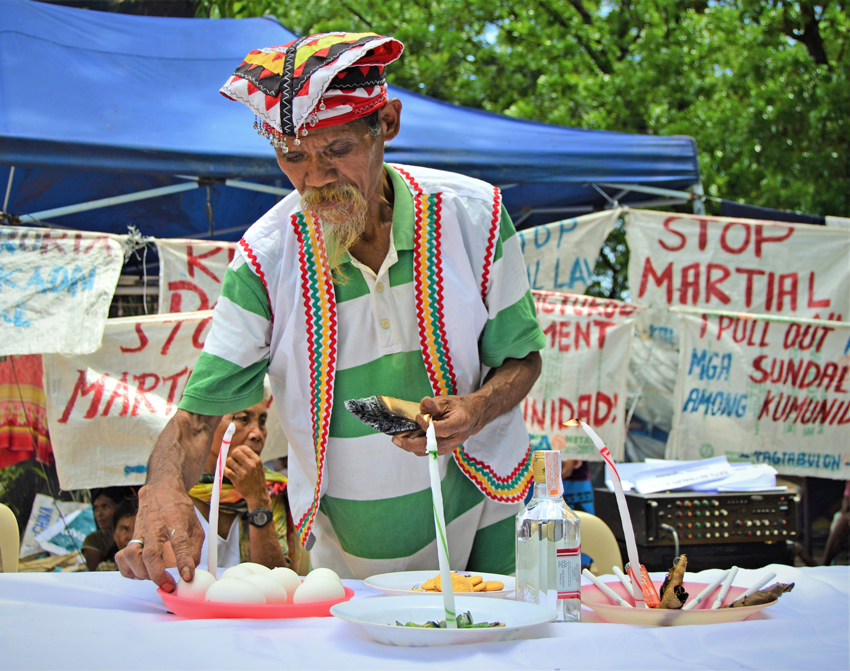 RITUAL FOR PEACE. A Higaonon tribal leader performs “singampo,” a ritual purposely asking the “Magbabaya” (Creator) to protect them and their children and to hasten their return to their community, on Monday, June 19, in Cagayan de Oro City. Around 137 individuals had to flee their homes in Sitio Kimansi, Barangay Banglay, in Lagonglong town, Misamis Oriental due to the fighting between government forces and communist fighters. (Jigger J. Jerusalem/davaotoday.com)

CAGAYAN DE ORO CITY, Philippines – A tribal leader has expressed his dismay over the resetting of the peace talks between the Duterte administration and the ​c​ommunist rebels saying the indigenous peoples (IPs) of Mindanao are the first victims of the ongoing armed conflict being waged by the guerrillas against the government.

“We are saddened by the delay in the resumption of the peace talks,” Datu Jomorito Goaynon, regional chairman of the IP group Kalumbay in Northern Mindanao.

“We the ’lumad’ (tribal people) are the first to be affected by the fighting between soldiers and rebels. The postponement of the peace talks will put us further in a dangerous position,” Goaynon said.

He said more than a hundred tribal members of the Higaonon tribe were forced​ to flee their homes in Sitio Kamansi, Barangay Banglay in Lagonglong town, Misamis Oriental more than two weeks ago due to the combat operations of the Army’s 58th Infantry Battalion and the fighters of the New People’s Army (NPA).

Due to fear that they would be​ caught in the crossfire, Goaynon said the evacuees had to leave their community, adding that if the peace talks have been ongoing and there was a ceasefire, then the people would have stayed put.

Sariza Acosta, spokesperson for the evacuees, said this wa​s the sixth time that they have left their mountain village.

From the start, Acosta said they have appealed to the local government and military leaders to keep soldiers away from their community.

In a previous interview First Lieutenant Tere Ingente, spokesperson for the Army’s 4th Infantry Division, said government troops were in Banglay to build a military detachment in the area although a distance from the civilian population, which has the support of the local government and tribal officials.

On Monday, the evacuees’ tribal leaders performed “singampo,” a ritual purposely asking the “Magbabaya” (Creator) to protect them and their children and to hasten their return to their community.

Misamis Oriental provincial information officer Nicole Managbanag said the provincial government w​ould​ extend assistance to the evacuees for the duration of their stay at the Capitol compound. (davaotoday.com)