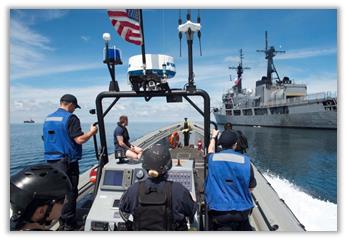 DAVAO CITY, Philippines—Both the government of the Philippines and the United States held a coordinated and completed patrol in the Sulu Sea to enhance regional peace and stability.

“Our at-sea operations with the Philippine Navy demonstrate our commitment to the alliance and deter piracy and illegal activities,” Gabrielson said.

The coordinated navy patrol was at the invitation of the Duterte administration which officially concluded on Saturday, July 1.

During the operation, crews from the Littoral Combat Ship USS Coronado (LCS 4) and the Del Pilar Class Frigate BRP Ramon Alcaraz (PF 16) worked closely together to detect and deter threats to maritime security.

According to Gabrielson, the patrol strengthened maritime security cooperation between the U.S. and Philippine navies and enhanced both navies’ ability to respond to piracy and transnational criminal activity at sea.

“It further demonstrates the U.S. commitment to the security of the Philippines and enduring U.S. interest in promoting stability and prosperity in the Indo-Asia-Pacific region,” the commander of Task Force 73 said.

As part of the operation, a group of Philippine Navy sailors embarked on USS Coronado to coordinate communications and movements between the two ships, he said.

“The Philippine sailors also exchanged best practices with their U.S. counterparts’ in visit, board, search, and seizure (VBSS) techniques and information sharing,” he said.

Prior to Saturday’s activity, the USS Coronado had completed the Maritime Training Activity “Sama Sama” with the Philippine Navy in the vicinity of Cebu. The exercise provided opportunities to sharpen tactical skills in maritime security operations that were employed during the coordinated patrol.

Both the U.S and the Philippines continue to work together on a number of initiatives and conduct regular military exchanges through routine participation in bilateral and multilateral exercises.