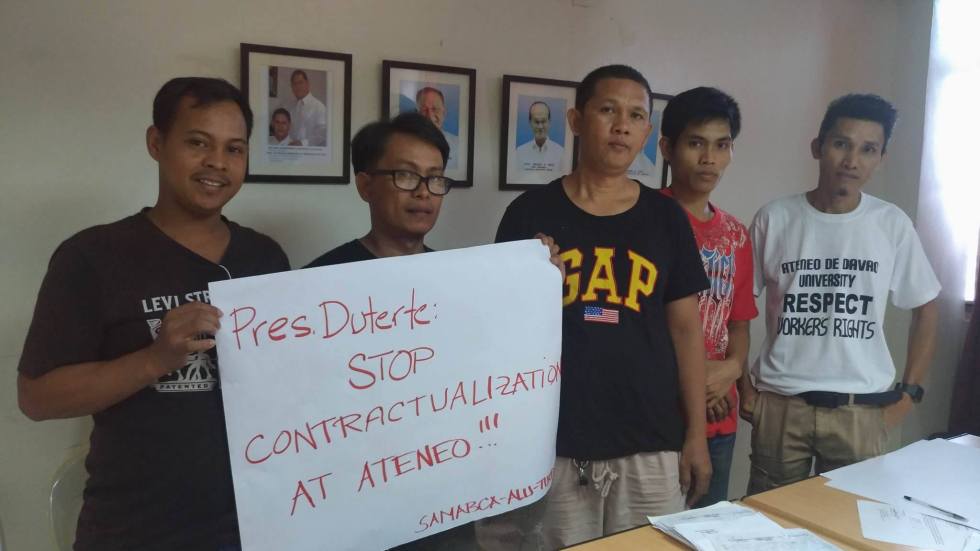 DAVAO CITY, Philippines — Roseno Mabale, 42 has been a school janitor for half of his life.

He started working as a school janitor the Ateneo de Davao University (ADDU) in 1996 under a service provider and he remembered it was on March 16, 1997 when an area was assigned for him to clean inside the campus of ADDU along Jacinto Street.

In an interview with Davao Today on Thursday, October 19, Mabale said he would wake up at 4am to work from 5am to 11am and another shift from 12 noon to 2pm. He earns a net income of P6,900 monthly to support his family.

But last Monday, October 16 Mabale and dozens of workers in ADDU were prohibited from entering the school. He found himself jobless after more than 20 years of work.

Mabale is the Vice President of the Samahan ng mga Manggagawang Blue Collar sa Ateneo (SAMABCA) who are protesting what they call is the university’s union busting and unfair labor practice. The SAMABCA is an organization which the workers put up last June 28 to assert the rights of rank and file workers who are under the Blue Collar Manpower Services Inc (BCMSI).

“The school management wanted us to file voluntary resignation and to apply under the new service provider of the school,” Mabale said.

However, Mabale said they do not want to file a resignation because this would mean cutting the length of service they have rendered. Some of his colleagues have served over a year. They were also unsure wether the new service provider will automatically hire them.

Mabale said the contract between ADDU and BCMSI started in 2003.

Mabale said it was only last October 13, when they found out that the contract between the ADDU and the BCMSI has expired on May 31 last year.

In a copy of the letter of the legal counsel of the Blue Collar to Department of Labor and Employment obtained by Davao Today, lawyer, Glenn Polinar wrote to Reynaldo Dennis V. Badilles, chief of the Davao City Field Office of DOLE 11 regarding the Certification of Election scheduled on October 13 and October 16.

“We shall stop our services on October 15, 2017 as directed by Ateneo de Davao University,” Polinar wrote.

He said the supposed bargaining unit “has ceased to exist” because of the development.

“For purposes of transition, you will continue providing services until 15 October 2017, unless sooner advised,” Tabora said.

Anecito Detomal, 46, president of SAMABCA said theirs was “a clear case of contractualization”.

Detomal, who worked as a janitor for 18 years, said they hoped to form a union to provide them with job security. However, he said the ADDU is barring them to form a union.

“Some of our colleagues who were left inside the campus said they were told that if they go near us, they will lose their jobs instantly,” Detomal said.

The SAMABCA, who affiliated with the Alliance of Labor Union-Trade Congress of the Philippines (ALU-TUCP) on Wednesday, October 18, held its Certificate of Election for the DOLE to determine the sole exclusive
bargaining agent or SEBA.

Along Roxas Avenue, just outside the ADDU, workers hang streamers calling the Jesuit priests “hyprocrite” and asking them to recognize the workers’ rights.

Detomal said out of the 250 votes cast from the Jacinto and Matina campuses, 239 workers voted for SAMABCA, while zero votes for “no union”, 10 challenged ballots, and one spoiled ballot.

Detomal said there were an estimate of 300 workers who were not allowed to report for duty. He said more than 50 workers were forced to resign from different divisions.

On Thursday, there was supposedly a meeting at the National Conciliation and Mediation Board (NCMB-11) between SAMABCA and the BCMSI, but, only the SAMABCA appeared. The hearing was rescheduled on October 23 and the workers hope the representative of the ADDU will attend saying, it was the university who“barred” them from forming the union in the first place.

The workers alleged that the ADDU and the BCMSI are guilty of violating the workers right to self organization, illegal lock-out, harassment and coercion, and interference and intervention.

However, in a statement on Wednesday, the university said it is “inappropriate to claim that the Ateneo is involved in this controversy.”

“Ateneo’s contract, which has long expired, lies with the agency and not with the Blue Collar personnel who are under Blue Collar management,” the school said.

It said: (p)arties are free to enter and rescind contracts when conditions are no longer favorable to them.”

“The University empathizes with them, but it reiterates its stand that these personnel are employees of Blue Collar Manpower Services,” it added.

Meanwhile, Ernesth Khalan III, labor organizer of ALU-TUCP argued that the workers are already under the university.

“When you remove the contract with the agency, the employees are already under the school and not the service provider,” Khalan said.

He said some workers who were supposed to join the Certificate of Election were also prohibited from participating in the activity. He said this shows that the ADDU is clearly not in favor for the workers to form a union.

He also called it “ironic” that a case like this happened in the hometown of President Rodrigo Duterte who campaigned to end contractualization. (davaotoday.com)