DAVAO CITY – A village chieftain here lambasted the military for forcing residents to sign a document that would portray them as “NPA (New People’s Army) surrenderees.”

Celso Bughao, the village chief of Barangay Lumiad, Paquibato District, Davao city told members of the City Council during its regular session Tuesday that the 69th Infantry Battalion of the Philippine Army was responsible for the distribution of certificates.

A copy of the “certification” obtained by Davao Today reads as follows: 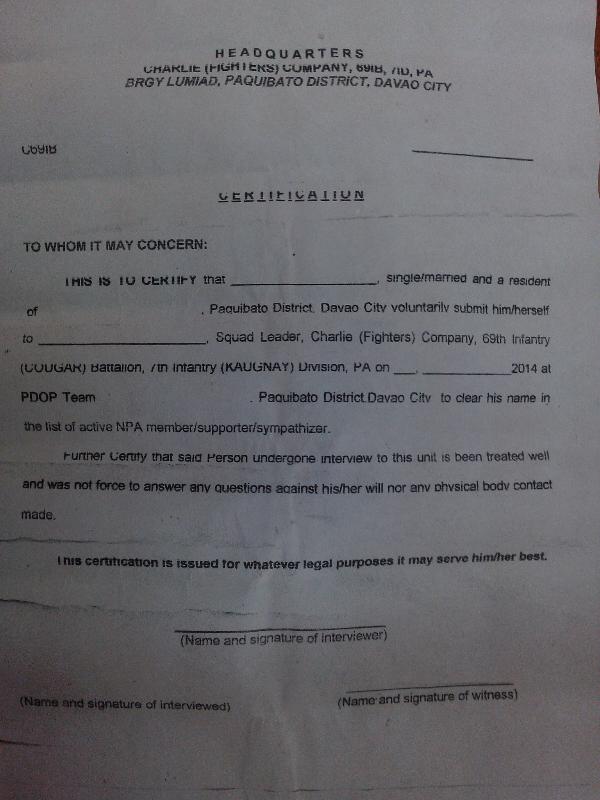 Council Victorio U. Advincula of Davao City’s Third District said that “we never experienced this situation” even if some barangays in his district are known to have a strong NPA presence.

Advincula said that the barangay could record “actual complaints of the people” on their logbook and even call for dialog with the military. He also said that they should execute an affidavit before the Council’s committee on human rights.

Bello, chairperson of the Council’s committee on human rights, noted that that the fact that Bughao, a village chieftain, made the report “goes to show that there is something going on in the area and this is not a mere personal endeavour but an exercise of his function.”

For Councilor Danilo Dayanghirang of the Second District where Paquibato belongs, “the problem is already there.”

“We can tell the military that they stop it,” said Dayanghirang who proposed that they may take action immediately by means of a resolution pending an investigation.

Dayanghirang said that “(t)his will serve as a lesson for the military that they cannot do this, this is very wrong.”

First District Councilor Leah Librado-Yap, for her part said “this is not new to us, for the past few years, there have been several complaints against actions of the military especially in the areas in Paquibato District.”

“In fact in 2011, we passed a resolution urging the military to remove their encampment (as) there was a (military) camp near a day care center and school. A year after, there’s (the) use of the military of the barangay hall (and public) buildings as their camps,” said Librado-Yap who is also a member of the council’s human rights committee.

For Bello, “they (military) are asking for information which is protected by the privacy of persons.”

Bello also said to be an NPA sympathizer is not a violation of the law.

“I am sure the military has a legal division that can guide those people requiring those filling-up of this application form, I would invite the military personnel to explain,” he said adding that “maybe this part already of their existing program, Oplan Bayanihan or something, if this is true, there’s a possibility that they will make such claim that it is voluntary.”

In news reports, 10th Infantry Divison of the Philippine Army Spokesperson Capt. Ernest Carolina denied the form was for all residents but for “an actual NPA surrenderee.”

However, Bughao said that his tanod-complainant said that it is the same form.

“He was accompanied by a barangay councilor to go to the unit’s Sergeant who gave the form. He said it is the same form he signed. He even tried to get the form which he signed previously to tear it but they (soldiers) did not return it,” said Bughao. He said that the soldiers searched the tanod’s body for marks.

Bughao said that the current Army unit is not the first to do such acts.

“Kami mibati gyud og kabalaka kay sa amo man gong nasinati kaniadto, murag gigamit mi ba nga sibilyan para ba kaha sa ilang promotion o unsa, (We are really concerned because as what we have experienced before, they seem to only use us civilians maybe for their promotion),” said Bughao.