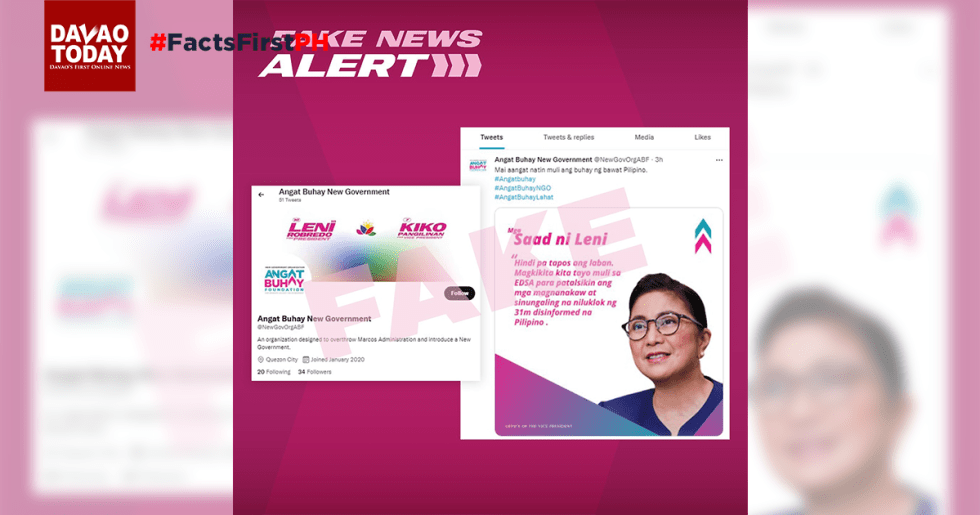 In its profile, @NewGovOrgABF described itself as an organization designed to overthrow Marcos administration and introduce a New Government. It joined the social networking site in January 2020 with a location in Quezon City.

As of today, May 22, the account no longer exists but comments on its post can still be accessed.

She denied that Angat Buhay New Government is connected with her office, the Office of the Vice President (OVP), and said that any post published by the said account only aims to deceive the people and spread disinformation.

VP Robredo advised the public to be critical and to verify or fact-check any speculations, stories, or information that people see online.

Angat Buhay was launched in October 2016 as the contribution of VP Leni’s office in the fight against poverty. The program aims to bring together the public and the private sectors—organizations and individuals alike—to address the needs of families in the farthest and the poorest communities in the country.

The OVP reaches out to these areas by working with partners in providing interventions and mobilizing support through six key advocacy areas: food security and nutrition, universal healthcare, public education, rural development, housing and resettlement, and women empowerment.

VP Robredo said that official details and announcements regarding her Angat Buhay NGO will be posted in her official FB page.