‘We welcome any form of support’ –EastMinCom 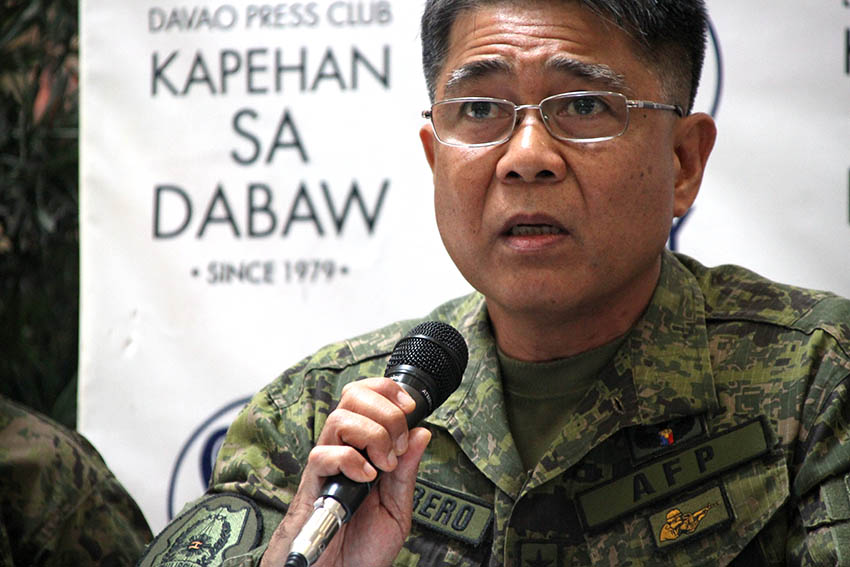 OPEN MIND. Lieutenant General Rey Leonardo Guerrero, Commander of the Armed Forces’ Eastern Mindanao Command says they welcome all forms of support in the war against the Maute Group, may be it be from groups such as the Moro Islamic Liberation Front, Moro National Liberation Front, and even the New People’s Army. Guerrero made the comment on Monday, May 29 in a press conference in Davao City. (Paulo C. Rizal/davaotoday.com)

DAVAO CITY, Philippines –With the expressed support of the Moro National Liberation Front (MNLF) to fight against terrorism in Marawi, the Eastern Mindanao Command of the Armed Forces of the Philippines announced that they welcome any form of assistance.

“We welcome any form of support or assistance especially in fighting against terrorism,” Eastern Mindanao Command Chief, Lt. Gen. Rey Leonardo Guerrero said in a press conference at the SM City Davao, May 29.

The MNLF has expressed full support on Duterte’s declaration of Martial Law in Mindanao last Tuesday.

During his speech in Jolo, Sulu on Saturday, May 27, Pres. Duterte read the letter sent to him by MNLF Chairman Nur Misuari saying that the armed forces are allowed to “invite” MNLF volunteers.

Duterte accepted Misuari’s offer and called on MNLF members to help the government fight against the Maute group and other terrorists in the Marawi siege. He offered privileges such as pay and housing benefits in return, to those who will be joining.

“As to how they will be employed in the area of Marawi City, I would not venture into making any guidelines or try to formulate some sort of concept on how this will be implemented since it is under Western Mindanao Command,” he said.