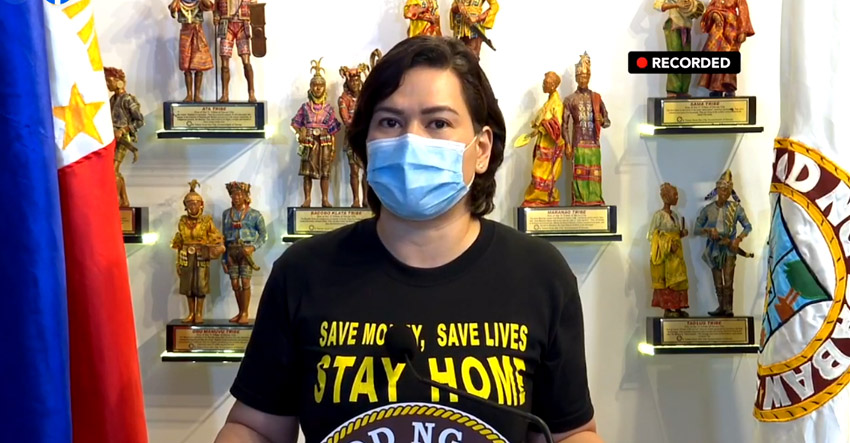 DAVAO CITY, Philippines – Mayor Sara Duterte-Carpio’s State of the City Address Monday, November 16, called on Dabawenyos to brace through “a difficult stretch” of the COVID-19 pandemic that may last until next year, while guaranteeing continued medical and economic relief from the city.

The mayor’s 23-minute long video address aired on the City Government’s Facebook page, listed the health responses of the city, as well as its socio-economic aid to its constituents in the now ten-month long pandemic.

Duterte-Carpio admitted that despite being aware of the challenges to respond to the crisis, she did not expect the impact of the current situation affecting around 1.8 million Dabawenyos.

“What completely floored me was that I did not see an end to this one. Ten months since the declaration of the coronavirus pandemic, Davao City remains trapped in a very peculiar reality just like the rest of the world. And we should all manage our expectations because this pandemic will define how we will live our lives for another two years,” the mayor said.

The cases in Davao surged in the past two months after the city eased restrictions in June, often topping the nation in the most reported new cases per day. They city government has re-imposed curfew, liquor ban and now the food and medicine pass to regulate movement within the city.

“This is not only a public health emergency, but also an economic and social crisis. And we are endlessly, trying out the best strategic, seamless connection between the stages under our Plan of Action against Covid19,” Duterte-Carpio assured.

Among the city government’s COVID-19 response was expanding testing facilities to two private laboratories that could do 1,200 tests per day. Contact tracing efforts has been beefed up with 1,500 personnel deployed by the Department of Interior and Local Government.

The city has set up 15 treatment and monitoring facilities with a capacity of 1,171 beds and four “Test and Wait” facilities for passengers arriving at Davao International Airport for quarantine and testing with a 601-bed capacity.

Three private hospitals have now opened COVID-19 wards as the state-owned Southern Philippines Medical Center has been filled to its capacity.

The mayor mentioned the Safe Davao QR Code is maximizing this for “faster contact tracing” despite controversies on data security and complaints of difficulty accessing the website because of heavy online traffic and glitches.

Duterte-Carpio reported that the city government distributed 1,305,454 grocery packs to 448,312 households in all 182 barangays of the city during the Enhanced Community Quarantine (ECQ) period between April to May.

Another 70, 994 food packs were also given to workers of establishments and sectors who remain to be affected during the Modified General Community Quarantine while cash assistance was distributed to at least 20,180 persons who lost their jobs during the pandemic.

In her closing statement, the mayor thanked Dabawenyos for the “support and constructive feedback”, and noted that in this stretch, she will “forever be between a rock and a hard place amidst this pandemic.”

Her closing words read: “And we, Dabawenyos, WE WILL NOT BREAK. The deaths, the pain, the debts, and the frustration are sent our way to change us into Dabawenyos, who look at dark clouds and see it as the silver lining.”

Her state of the city address comes amidst Davawenyos having mixed reactions on her handling of the pandemic, with recent re-impositions of curfew, liquor, food and medicine pass, and other restrictions in movement. (davaotoday.com)