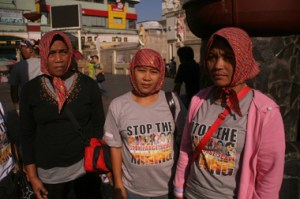 CRYING FOR JUSTICE. Widows Mercy Dejos (left), Rosalie Cabal (center) and Gina Batoy (right) participate in the ‘Manilakbayan’ (A Journey to Manila) to call for an end to political killings and human rights abuses in Mindanao. They cried for justice for their slain husbands. (davaotoday.com photo by Alex D. Lopez)

Gina is among the widows who joined the Manilakbayan (Journey to Manila) initiated by human rights, peace and environment groups in Mindanao. She was joined by several widows: Daisy Paborada, a Higaonon from Opol, Misamis Oriental; Rosalie Cabal from Kibawe, Bukidnon; Sharon Liguyon from San Fernando, Bukidnon; and Mercy Dejos from Sta. Cruz, Davao del Sur.

MANILA, Philippines — Widows of slain environmental activists spoke of their “perpetual” grief and search for justice in a picket-rally held in Quezon City, Thursday.

“My husband was among those killed under the Aquino regime,” says Gina Batoy, widow of Ramon Batoy, who was killed by elements of 10th Special Forces of the AFP in a military operation in Arakan, Cotabato province October last year.

Gina is among the widows who joined the Manilakbayan (Journey to Manila) initiated by human rights, peace and environment groups in Mindanao.  She was joined by several widows: Daisy Paborada, a Higaonon from Opol, Misamis Oriental; Rosalie Cabal from Kibawe, Bukidnon; Sharon Liguyon from San Fernando, Bukidnon; and Mercy Dejos from Sta. Cruz, Davao del Sur.

Daisy’s husband Gilbert Paborada was chair of the Pangalasag, a local Higaonon organization based in Opol, Misamis Oriental.  He was gunned down by unidentified assailants on October 4 in Puntod, Cagayan de Oro City.  Witnesses narrated that one gunman shot Gilbert in the head while he was already on the ground.  The Lumad leader sustained five gunshot wounds and died on the spot.

Pangalasag and Gilbert’s family believe his death is linked to their resistance against the palm oil expansion plan Nakeen Corporation.

“Sakit balik-balikon ang nahitabo, apan kinahanglan nakong mosulti aron madungog ang kamatuoran kabahin sa pagkamatay sa akong bana (It’s painful to revisit the past but I need to speak; the truth behind the death of my husband must be heard),” Rosalie said in an interview by davaotoday.com.

Rosalie’s husband Margarito Cabal, 47, was gunned down last May 9. He was an environmental advocate and organizer of a group opposing the construction of the 300-megawatt (MW) mega dam project in Bukidnon province.

Standing beside Rosita during the rally was Mercy, the widow of murdered Blaan peasant leader Rudy Dejos of Sta. Cruz, Davao del Sur.

Mercy also told davaotoday.com that she was still hurting from what happened to her family.  “Gipatay nila si Rudy apil ang among anak (They killed Rudy and my son),” she said.

Rudy, 50, and son Rody Rick, 26, were found dead with gunshot and stab wounds inside their house on February 27, 2011.  Rope-burn marks were also found in their arms, an indication that both father and son were tied and tortured before suffering their instant death, according to the human rights group Karapatan which conducted a fact-finding mission in the area.

Rudy was the tribal chieftain of his community and vice-chairperson of Zone-1 Farmers Association and a member of the Kilusang Magbubukid ng Pilipinas (KMP) in Southern Mindanao.

According to Karapatan, the Dejos family members were consistent targets of harassment and intimidation by soldiers from the 39th IB Philippine Army and members of the Citizens Armed Forces Geographical Unit since a year before their deaths.  During meetings initiated by the military, the community members were admonished not to attend rallies, not to go to Karapatan and to isolate the Dejoses.  Rudy was tagged as a communist rebel and the Kilusang Magbubukid ng Pilipinas as a communist front.

While in the picket-line in Quezon City with other Manilakbayan delegates, Mercy became teary-eyed upon hearing that General Jorge Segovia was among the military top-brass recently promoted by President Aquino. 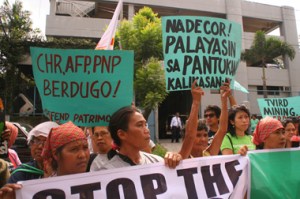 AGAINST THE OPB. Widows Sharon Liguyon (left), Mercy Dejos (center) and Rosalie Cabal (far right) participate in a picket rally Thursday in front of a posh Quezon City hotel where the Commission on Human Rights, Armed Forces of the Philippines and the Philippine National Police were having a closed-door meeting. (davaotoday.com photo by Alex D. Lopez)

General Segovia was the commander of the 10th Infantry Division in the Davao region at the time that Rudy and Rody Rick were brutally killed.  The 39th IB is under the 10th ID.

The uncertainties of Mercy were also shared by Sharon, the widow of Higaonon leader Jimmy Liguyon, a village chieftain of San Fernando, Bukidnon.

Jimmy, was village chief and also the vice chair of Kasilo (Kaugalingong Sistema sa Igpasasindog to Lumadnong Ogpaan), a local IP organization in Bukidnon.  The group actively opposed against the entry of large-scale mining in their ancestral lands.

Jimmy was shot and killed on March 5, 2012 by Alde Salusad alias ‘Butsoy’ after Jimmy refused to sign a local resolution allowing the entry of mining companies in their area.  Salusad was the leader of the dreaded New Indigenous People’s Army Reform, an active paramilitary group armed and backed by the Army’s 8th Infantry Battalion  in Bukidnon.

“Until now Salusad has not yet been accosted despite the issuance of a warrant of arrest,” Sharon lamented.  She now leads the resistance against the entry of Santo Cristo Mining, a large-scale mining company that intends to operate inside their ancestral lands.

For five months now, Sharon and Higaonon tribemates have camped in front of the provincial capitol of Bukidnon to protest the development aggression.

Sharon and the other Lumad leaders are angered that Jimmy’s killers freely move around in Bukidnon.

“We are strangers here in Manila,” said Gina Batoy, “but with the help of Manilakbayan and its support groups we hope to expand our quest for justice,” she added in her dialect.

“We must be brave in telling the people of Manila that political killings are rampant in Mindanao,” Gina said.  She said what is important is the fact that the widows from Mindanao have joined a much larger group.