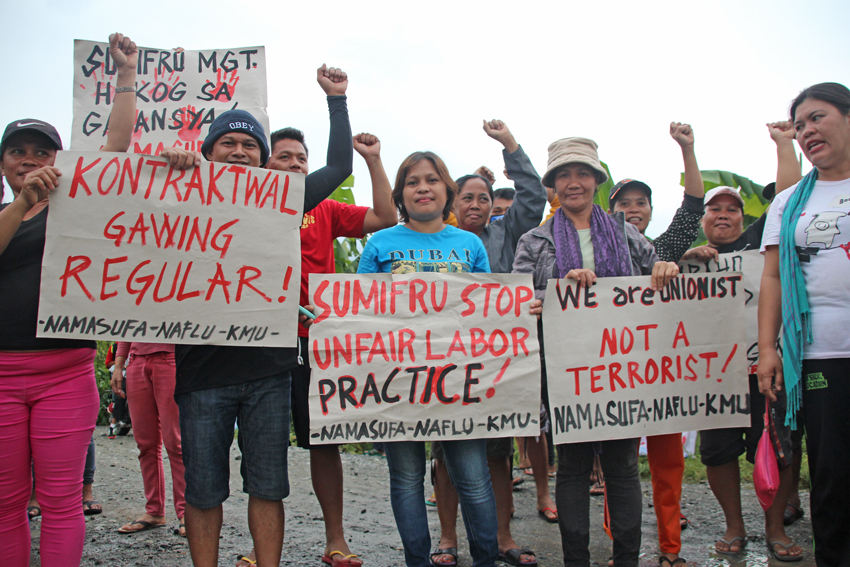 FILE PHOTO. Around 900 workers of Sumifru Philippines Corp., a banana-export plantation in Compostela Valley province, launched a strike last October to demand the company to engage them in collective bargaining and regularization of their tenure. (Mara S. Genotiva/davaotoday.com)

DAVAO CITY, Philippines — Workers’ group on Monday lamented that the labor woes involving a Japanese multinational banana firm was not tackled before the visit of Japanese foreign minister Taro Kono here in the country.

The Ecumenical Institute for Labor Education and Research, Inc. (EILER) pointed out that the government is turning a blind eye on the plight of the Sumifru banana workers after being harassed and whose rights were violated.

“President Duterte and Minister Kono did not discuss the accountability of both governments, DOLE, Davao region LGUs and Sumifru Corporation in recognizing the collective bargaining and trade union rights of Sumifru workers. Worse, they turn a blind eye on human rights violations in the business operations of the exporting giant,” Rochelle Porras, EILER executive director said in a statement.

Porras stressed that the Japanese official should also underscore the protection of workers.

“He should also underscore the protection of the workers, who are the life and driving force of the region’s economy. Sumifru Corporation after all controls 30% of the banana supply in Japan. That is not possible without the blood and sweat of more than 18,100 Filipino workers producing 19,000 boxes of banana daily, thousands of whom are only paid P365 per day, in contrast to the company’s P19 million gross daily income,” Porras said.

On Saturday, Rodrigo Duterte welcomed Minister Kono in a courtesy call in Davao City following the invitation of Foreign Affairs Secretary Teodoro Locsin Jr, in the inauguration ceremony of the Japanese Consulate General in Davao.

While Minister Kono affirmed Japan’s support for peace and stability in the region, EILER was disappointed over the Japanese official’s “silence” on the labor rights violations, red tagging, violent dispersals of Sumifru Corporation to the workers’ communities in Mindanao.

“President Duterte and Minister Kono did not discuss the accountability of both governments, DOLE, Davao region LGUs and Sumifru Corporation in recognizing the collective bargaining and trade union rights of Sumifru workers. Worse, they turn a blind eye on human rights violations in the business operations of the exporting giant,” Porras, said.

At present, banana plantation workers under Nagkahiusang Mamumuo sa Suyapa Farm (NAMASUFA) in Compostela Valley, travelled from Mindanao to stage a campout in Liwasang Bonifacio in Manila, to demand on the national government to settle their labor dispute between the Sumifru management.

The union hit the Department of Labor and Employment’s (DOLE) inaction to its 2010 decision to regularize hundreds of contractual workers in the company.

NAMASUFA President Paul John Dizon told DavaoToday that the only meeting called by DOLE was on January 4, but still, it failed to make the Sumifru management accountable and face the labor union.

Dizon said that they also lobbied their labor issue to Vice President Leni Robredo and the Senate Committee on Labor, Employment and Human Resources.

“It is just fair for us banana workers serving the company for years, to be recognize as regular workers,” he said.

The group emphasized that the right to strike is a fundamental human and trade union right protected by laws and international conventions,particularly, the ILO Conventions 87 and 98, both ratified by the Philippines and Japan. (davaotoday.com)