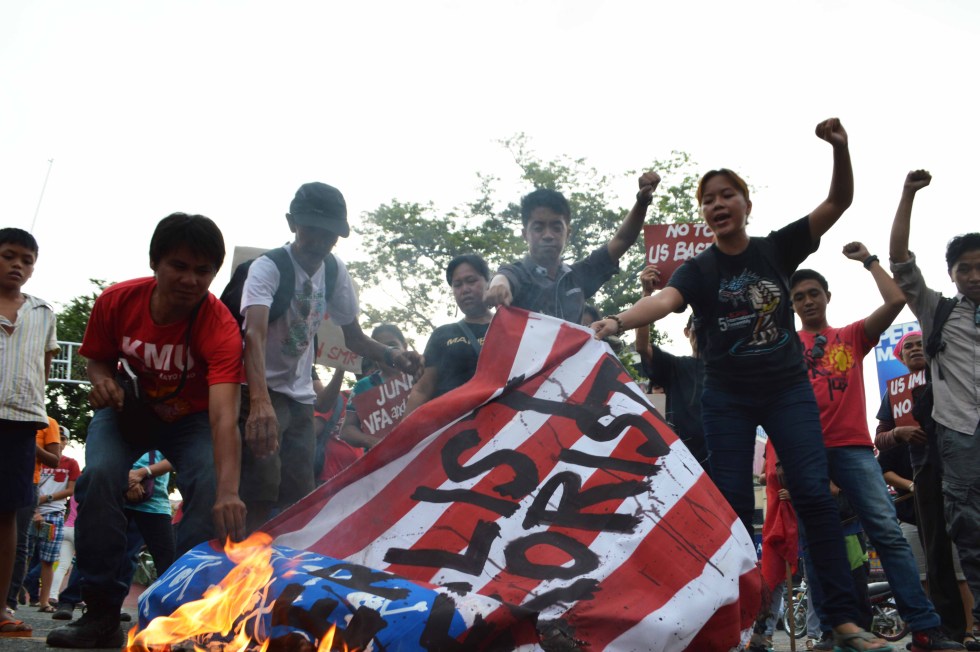 Activists shout “US imperialist No. 1 terrorist” as they burn a US flag in a rally in Davao City on September 11, 2016. (davaotoday.com file photo)

DAVAO CITY, Philippines—Members of the militant youth group League of Filipino Students hit out the travel ban against people from seven Muslim countries issued by US President Donald Trump and the Enhanced Defense Cooperation Agreement between the Philippines and US.

“Trump’s executive order that bans immigrants from seven Muslim countries is the height of bigotry and xenophobia. It is unreasonably hypocritical for Trump to forbid people from these Muslim countries to enter America when US imperialist government was the ones responsible for attacking and dragging them into the chaos of wars,” JP Rosos, LFS national spokesperson, said in a statement Monday.

The militant youth group staged a protest rally in front of the Embassy of the United States of America in Manila on Monday morning to protest EDCA and Trump’s travel ban order.

Trump’s executive order bars citizens of seven Muslim- majority countries— Syria, Iraq, Libya, Somalia, Iran, Sudan, and Yemen— from entering the US for a period of 90 days and suspends the entry of refugees for 120 days.

“It is ridiculous that Trump banned people from these seven countries because he tagged their countries as nations with proven history of terrorism against US and its allies. His claims are not backed with any data or scientific basis,” he said, pointing out that American think tank Cato Institute noted that these seven countries did not produce any terrorists that attacks anyone in US territory.

“Trump is banning immigrants from the countries that is being destroyed and destabilized by the US imperialist government. We want to remind him that the US imperialist government have been conducting wars of aggression in these countries. Syria, Iraq, Libya, Somalia, and Yemen have suffered several bombings executed by US while Iran and Sudan were punished with heavy sanctions,” he added.

Rosos said that in the “height of irony that Trump bans people from entering America but US imperialist government continues to assert building their military bases in the Philippines.”

This came after Philippine Defense Secretary Delfin Lorenzana announced that the Pentagon gave the “green light” to start the building of US bases under EDCA this 2017.

“This is unacceptable. We must not allow the construction or upgrading of US bases in the Philippines. It is wanton violation of our national sovereignty and territorial integrity. It also places the lives of the Filipino people at great risks,” said Rosos.

He said EDCA guaranteed the “unimpeded access, full control, and unencumbered rights to the so-called Agreed Locations,” pointing out that the agreement gave the US an “exclusive use” and “full title” over the prepositioned equipment, supplies, and material.

“There are several compelling reasons to abrogate EDCA. It is a lopsided agreement that will only allow the continued domination of US imperialism over our country. We refuse to see our country being used for Trump and the US imperialist government’s fascist interests,” Rosos said.

“You place us all in danger. You do that and I will be there when you start building, even before you build the first post,” Duterte said in a press conference Sunday evening.

But Duterte said he will not meddle with the policies of Trump on banning immigrants. This, he said, is a way of reciprocating the US’ president’s non-interference with the Philippines anti-drug war.

“Kasi nu’ng sinabi rin niya ako, ‘We will not interfere in your drug war, you’re doing it right.’ So out of respect for that statement, I can only answer him in the manner that he has told me. Hindi ako makialam (I will not interfere),” Duterte said. (davaotoday.com)