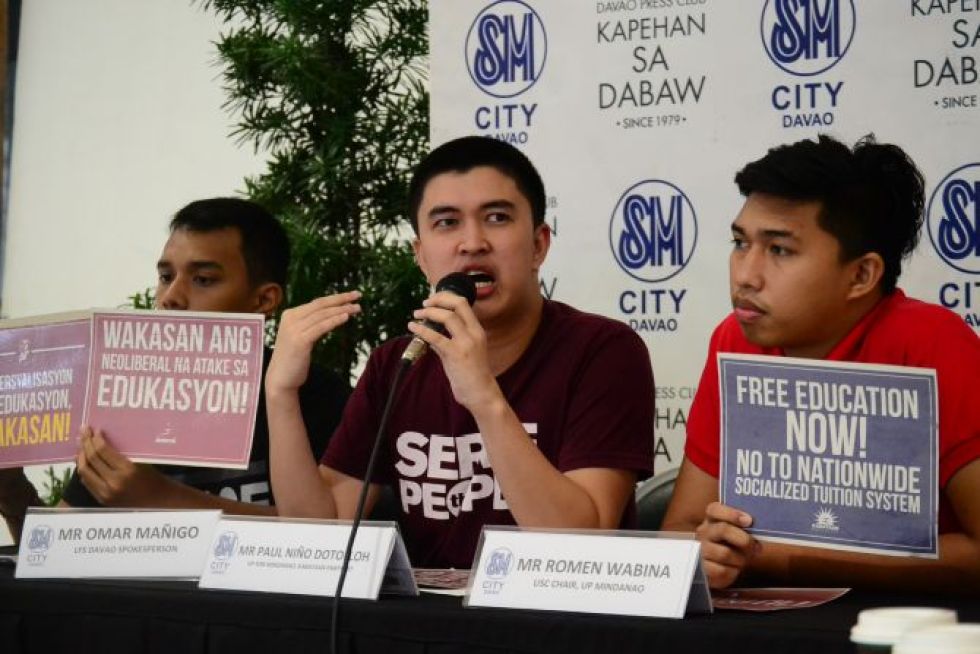 Kabataan Partylist Vice President for Mindanao, Paul Niňo Dotollo said the CHED’s approval to increase tuition and other school fees to 268 schools nationwide is not justified.

Dotollo said the approval of increases “is a complete turnaround of President Duterte’s statements last year of free education for college students.”

“It is a betrayal of hope among students and their parents who are burdened with paying five-digit tuition fees for six months,” he said.

A total of 32 schools in Davao region increased their tuition and other school fees, 16 of which are in Davao City.

A total of 154 private high schools in the city also increased their tuition fees.

“It is not true that there is an offset on profit of big schools and colleges in Davao and the whole country. Their profit will not be lessened because of first year and second year college students. They are just changed to grades 11 and 12 (senior high school),” Dotollo said.

Along with Dotollo, League of Filipino Students Davao City Spokesperson, Omar Maňigo said that the tuition hike is a neoliberal attack on the right of education of the students.

“They say it’s because of Kto12 that they’ve lost students. That is a lie because the students are only replaced with grade 11 and grade 12 students,” Maňigo said.

“Development of schools” which is the usual reason for tuition fee increases is unjust as school owners can gain from the “return of investments” allotted to them as stated in CHED Memorandum No. 3, Maňigo emphasized.

Kabataan Partylist also took note of the lack of consultations conducted by school administrators in Davao City for students and parents.

Dotollo added that in 2015 they criticized CHED for being absent during school consultations; CHED had said they were undermanned.

“The question therefore arises. How can you conclude or how can you come up with a justified conclusion if you weren’t there on the actual consultation and you didn’t know the situation of the students?” he asked.

Meanwhile, in a statement sent to the media on Sunday, June 4, the Alliance of Concerned Teachers (ACT) called for a higher education budget for teachers and school facilities and equipment for students.

“The increase in the education budget is not even enough to address the basic shortages of the schools. This is primarily due to the increased needs brought about by the implementation of the Senior High School program that added two years to the country’s 10-year basic education program. Further, the 2017 education budget increased allocation for the government’s private-public partnership’s Voucher System,” ACT Chairperson Benjamin Valbuena said.

ACT and the youth groups also asked CHED and the Duterte administration to heed the call of laying concrete and objective conditions to address the curricular concerns of the country’s education system. (davaotoday.com)