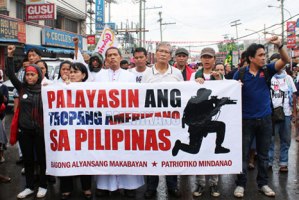 US TROOPS OUT NOW! Participants of the People's Caravan in Zamboanga City oppose the US-PH war exercises and the continued US intervention. Satur Ocampo (with eyeglasses), president of Bayan Muna and Makabayan Coalition, joined Mindanaons in defending national sovereignty. (davaotoday.com photo by Kai A. Rosello)

While the US-PH war exercises ended in April 27, it will extend until June in Sarangani.   “We all know that US troops will not leave. The US is only using the feud between China and Philippines over the Spratlys to justify its continued presence here,” says Bai Indayla of Patriyotiko Mindanao.

ZAMBOANGA CITY, Philippines — They came.  They saw.  They conquered. Almost.

Only 100 meters away and protesters could have reached the vicinity of the Western Mindanao Command (WestMinCom) headquarters where the US Joint Special Operations Task Force also holds office. The militants could have reached the gates if they march for 600 meters farther, only if the military didn’t set up barricades of makeshift barbed-wire fence, three Armored Personnel Carrier, a fire truck and some 300 police riot dispersal personnel.

About 3,000 workers, peasants, youth and students, teachers, church people, Moro, Lumads (indigenous people) and urban poor settlers, among others, converged here to protest the Balikatan military war exercises between the US and Philippine troops.

Dubbed People’s Caravan and Lakbayan against US Militarism and Plunder, participants came from five Mindanao regions in a 77-vehicle caravan.

While the US-PH war exercises ended last  April 27, Patriyotiko Mindanao spokesperson Bai Ali Indayla said they are still opposing it because it extends until June in Sarangani in the Soccsksargen region.

“We all know that US troops will not leave,” she said.  “We believe, the US is only using the feud between China and Philippines over the Spratlys to justify its continued presence here,” she added.

“The pro-US stance of every president has become worse every time we change administration,” Satur Ocampo, Bayan Muna and Makabayan Coalition president, told davaotoday.com, adding, “But, we must not stop resisting.”

Ocampo was here when a Mindanao-wide People’s Caravan was held 10 years ago.  That was the time when the first US-RP military exercises, then under former President Gloria Macapagal-Arroyo, began in the areas of Basilan and Zamboanga.  He witnessed how participants, after entering the city, were practically locked up by local authorities inside the sports complex.  They were not allowed to march through the main streets to the city center.

But now, the protesters were allowed to march from the sports complex to Sutterville, San Jose in Gusa village. A 15-kilometer march to reach the spot that is few meters away from the WestMinCom headquarters.

Back then, locals and the local government unit have reacted negatively.  A number of unidentified locals stoned the protesters’ vehicles upon the latter’s entry to the city.  Many were hurt.  Allegedly, bags of feces were also prepared against the protesters.

Last week, PNP-Zamboanga’s Deputy Director Superintendent Hado Naingay Del said they allowed the protesters to conduct the activity as long as they “abide the conditions imposed by the local government.” He added it is the protesters’ right to petition the government for redress of grievances.  However, he declined to comment on the Balikatan exercises.

Meanwhile, in Luzon, a simultaneous protest caravan was held from Metro Manila to Basa Airbase in Floridablanca City and to Clark Airbase in Angeles City, Pampanga.

“Since 2002, US forces have been deployed in the country, raping our women and our sovereignty,” Gloria Arellano, national secretary general of urban poor group Kalipunan ng Damayan Mahihirap (Kadamay), said in a press statement.

Kadamay slammed the entry of more than 4,700 US troops who will be deployed in the country’s different urban centers.  It further scored the ‘rotational deployment’ to the country of more American troops on top of the more than 600 soldiers already based in Camp Navarro, Zamboanga City.

“The presence of thousands of foreign troops in the country is a virtual reinstatement of the US Military Base in the country after the Philippine Senate rejected its renewal 20 years ago,” Arellano added.

It can be recalled, the Senate was compelled to vote against the renewal of the Military Bases Agreement (MBA) on September 16, 1992 because of the people’s mounting protest.  It led to the abolition of US bases in the country.

The MBA was signed between the US and Philippine governments on March 14, 1947.  It formalized the establishment of 23 US military installations in the country’s strategic areas including the Subic Naval Base which covers 26,000 hectares and Clark Airbase which covers 66,258 hectares.  Under this agreement, the US retains primary criminal jurisdiction over its troops.  That is, if US personnel are accused of a crime, they are usually shipped back to the US rather than tried in the Philippines.

In 2006, US Marine Lance Corporal Daniel Smith was convicted for raping ‘Nicole,’ a native of Zamboanga, in Subic base.  Smith remained under US custody instead of being detained in a Philippine jail.

Prior to the war exercises, US Marines remarked that “scantily clad women” are a source of “fun” in the Philippines.  Women’s group Gabriela scored the US Marines saying the remark was an “insult and denigration” against Filipina women.

De Jesus said, it is an affront to the country’s dignity that Filipinas, and even children, are made commodities as the US troops carry their “culture of conquer” here.  “It’s a form of violence that women and children are made prostitutes,” she said.

Gabriela said the massive US troop deployment will only heighten prostitution and abuse of women and children just like in the ‘80s when the US Army was based in Olongapo.  Back then, the group said, 30,000 women — mostly between 14 to 16 years olds — work in brothels and bars.

Despite granting the Philippines its so-called independence in 1945, the US maintained its military presence in the country.  On August 30, 1951, the US-RP Mutual Defense Treaty was signed, obliging both countries to provide joint defense against any external attacks.  In 1999, the US-RP Visiting Forces Agreement was signed. This accord allows US troops to conduct war exercises in the country, further entrenching the US military role in the country. 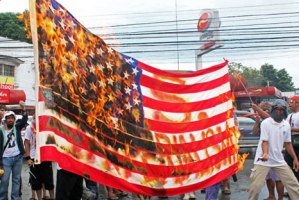 IN FIRE. Participants of the Mindanao-wide Lakbayan against US intervention and plunder burn an American flag in Zamboanga City. They opposed the presence of US troops in the country and asserted national sovereignty. (davaotoday.com photo by Irika A. Rosello)

Worse than his mother

Ocampo said it was the late “pro-American” Corazon Aquino who rallied in the Congress for the US military bases to stay in the country.

Now, under her son’s leadership, the “puppetry to US dictates is even worse.”

Ocampo said the V FA was not enough for President Benigno Simeon “Noynoy” Aquino III, adding that Aquino entered into an agreement with the US last November creating a joint committee.  The committee aims to study and review the country’s economic problem.  There is a five-year joint US-PH economic program and reform program for the country’s trade and investments, legal system, and taxation law and order, among others.

“This means the US is even meddling with the civilian administration,” Ocampo said.

On April 30, according to Ocampo, Foreign Affairs Secretary Alberto del Rosario and Defense Secretary Voltaire Gazmin will meet with US State Secretary Hillary Clinton and Defense Secretary Leon Panetta in Washington DC (District of Colombia) to discuss an agreement to enhance US military intervention and increase troop deployment in the country.  Aquino is set to follow to co-sign the agreement with US President Barack Obama.

The agreement is said to be part of the US defense plan to re-assert its dominance in the Asia-Pacific as it is threatened with China’s rising economic and military power and to protect its economic interests.  US’s plan calls for maximum use of treaty and executive arrangements with its allies including our country, Singapore, South Korea, Japan and Australia.

Currently, China and the Philippines are at odds because of the Spratly islands.

Ocampo said the Philippine government and its people need to strengthen their stand, to diplomatically oppose China’s harassment.  “We need to assert our place but we must not depend on US, rather, we must defend ourselves.  We must not allow ourselves to be under the mercy of US again.”

Bai Ali Indayla of the alliance Patriyotiko Mindanao explained why the US continues to deploy its troops in the country.

“The US has long been under economic crisis.  It needs to colonize and control countries to get raw materials and to sell its surplus products,” adding that US also needs these countries to sell its weapons and military equipment, “It needs to create wars to save its bankrupt economy.”

Indayla said, the US wants to continue controlling the country including the economic and natural resources.  In 2008, the biggest oil company in US, the Exxon Mobil, started exploring the natural gas deposits in Tawi-tawi Sea.  The US is also interested in mining the goldfield province of Compostela Valley in the Davao Region.  It continues to guard other US-based corporations like the Dole-Philippines that has long owned vast lands in Mindanao.

“We have seen, in the almost one decade stay of US troops here, they’ve done nothing good.  Instead, they only trample our sovereignty,” she said.

Receiving aid for a pittance

“We have been at the losing end of the 65 years of supposed RP-US “special relations,” Ocampo said.

Since the US-RP military assistance agreement in 1947, the US has given the country only secondhand war materiel such as secondhand rifles, secondhand helicopters and secondhand ships, among others.  The agreement has aimed to modernize the armed forces, yet, the country has been receiving aid for a pittance despite its support to US wars against Korea, Vietnam, Iraq and Afghanistan.

“Filipino soldiers are already happy if the US government gives helmets and other things.  But this is very small compared to what they’ve been getting from us.  Through surveillance mapping of our territory, which they can do through their satellite, they can locate mineral resources that they can later exploit.  Since they came here in 1898 until now, their primary interest is the economy,” Ocampo explained.

“The US spends billions for wars and military equipment that kills people in our communities,” Indayla said.

Patriyotiko Mindanao calls on the people of Mindanao to defend the island from the continuous US incursion. “As long as the US troops are here and the US controls our country, we can never achieve genuine freedom, meaningful change and development.  We can never have our national sovereignty.”  (Kai A. Rosello & Marilou Aguirre-Tuburan/davatoday.com)